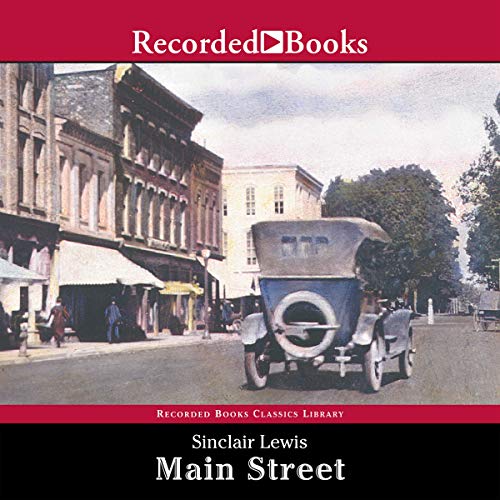 Widely hailed as a milestone in American literature, Sinclair Lewis' Main Street vividly describes a country on the verge of massive change, with traditional values being threatened by progress. The novel's heroine, Carol Milford, is a highly educated, ambitious woman who plans to join a newly enlightened society. But after marrying a small-town doctor, she finds herself trapped in the role of a dutiful wife. Carol's desires for social change conflict with the security of her comfortable married life, as she struggles to understand the cost of conformity...and rebellion. As relevant today as it was upon its 1920 publication, Main Street is both a masterful piece of writing and a fascinating microcosm of America's social evolution.
Public Domain (P)1996 Recorded Books

"A most searching and excellent piece of work; a feather in the cap of literature." (John Galsworthy)

Delightful reading of an excellent book

When downloading this book, I was unsure which reading to choose. First I noticed that this reading is about 2 hours longer than the other one, meaning that the other recording was read at a much faster clip. I listened to the audio samples and decided this was the superior choice. I was not disappointed. Ms. Caruso is a fantastic storyteller. I have noticed that even excellent male readers sometimes annoy with their falsetto "female" voices, but Ms. Caruso does an excellent job with the men in this story, while of course doing a wonderful Carol. She brings the 85-year-old dialog to life with a delightful, graceful rhythm that flows as naturally as if it were written last year. I wish she had narrated more books that interested me. Maybe I'll check out "Extremely Loud and Incredibly Close" just for her.

As for the book itself, I was surprised by just how relevant Mr. Lewis's depiction of life in 1910s Gopher Prairie remains today. We really have not changed much as a nation. Or perhaps we've circled back around. The story of Carol chafing against the small town that thinks the world of itself (and thinks rather little of the world) is poingnant, personal and well-told, while people and attitudes of Gopher Prairie are clearly recognizable in our current national characer. Listen to this book and realize that America exists in the struggle between Carol and Gopher Prairie. Indeed, America <i>is</i> the struggle between Carol and Gopher Prairie. In 2005, as in the 1910s, GP has the upper hand. At other times the Carols of America have, and at some point they will again. But one without the other would not truly be America.

I highly recommend this Audiobook as a wonderful reading of one of the Great American Novels.

This great classic by Sinclair Lewis is a mix of well drawn characters that both touches your heart and engages your mind. Although its fame lies in its depiction of the provincialism of Midwest attitudes, it far surpasses this narrow view of the book. It touches on our humanity. This also happens to be an oustanding narration with excellent audio clarity. Outstanding classic by one of America's leading literary lights.

I first purchased a less expensive audible version of this book and - try as I might - I simply couldn't get into the narrator's rendition of the classic. I balked at the thought of spending an additional, and relatively high, amount on a second version but finally bit the bullet. Well, it was *so* worth it! Ms Caruso's reading is engrossing - she captures the meaning and innuendos of Lewis' words in a pleasing voice.

I recommend paying the price - it will make all the difference in experiencing "Main Street."

Where does Main Street rank among all the audiobooks you’ve listened to so far?

In the high middle.

What was one of the most memorable moments of Main Street?

Carol's earnest encounters with the Gopher Prairie folks, trying to being them enlightenment.

She got into Carol's mindset and also those of the farmers and small town folk. She handled accents well and convincingly.

When Carol accompanies her husband on his medical call at night to save a woman in labor.

Caruso improves the story Lewis tells by her sympathy amidst the satire Sinclair Lewis lavished. He can get a bit heavy-handed, but Caruso helped move the plot along, even if the story goes on a bit longer than likely a lot of readers a century later would tolerate.

Thought of stopping 1/3 way in, glad I didn't

Where does Main Street rank among all the audiobooks you’ve listened to so far?

At first, the story and the protagonist annoyed (and bored) me. There's a mean-spiritedness about both that I found off putting. And yet, the story and the lead character grew on me. As I progressed further into the story, the characters became very real to me. Though difficult to accept at first, I could identify with them. What I initially thought of as mean-spiritedness is Lewis being honest. Not an easy listen, but definitely a worthwhile one.

What other book might you compare Main Street to and why?

Madame Bovary. Both have protagonists that long for something that is probably out of their reach.

At first, I thought the only value of the novel was as a sociological document. A chronicle of a people, time, and place that, frankly, is of interest only to sociologists. But, as mentioned above, the characters really grew on me. I became emotionally involved in their lives.

Though it is episodic in structure, if you can get through the first third of it, I think you'll find it hard to put down.

I can say enough about the story and esp the performance!! Stick with it...the second half is well worth it.

I loved the character development and subtle critique of small town America! Lewis did an amazing job embodying the tension between progressive thought and conservative thought in America...and showing how, given their proper space, both can exist in the same house.

I loved this book so much! There is a very good review at the top, so please go to that before reading. The comparison to Lake Woebegone was spot on. The story, themes and main character struck so many chords for me, personally, and continually amazed me how little things have changed in the last 100 years. The unrelenting listing of details is sometimes overwhelming in the audio format, but it completely put me right into the period to where I could visualize everything and will swear I could hear and smell Gopher Prairie as well as if I'd actually visited. The narrator is a favorite and she was fantastic here as well. If you've always wanted to travel back in time for a couple of weeks, read this book.

Sinclair Lewis Ahead of His Time

Having read Babbit, Dodsworth and It Can't Happen Here, I was not disappointed in listening to Main Street. The narrator was excellent. I was dubious as to a female voice.; however it was wholly appropriate and fitting .

Sinclair Lewis was ahead of his time in 1920 in addressing feminism and provincialism. This was a great "read" and leaves me excited to choose his next novel. And, I should reconsider my self-proclaimed label of conservative.

Milestone in American literature BUT...

This was a very original and insightful book when it was first published, but it has not aged particularly well. The writing is good, with some nice characterization, but it is mostly an exposé of small town american life of the time. Times have changed quite a bit since then and quite a few stories have exposed the underbelly of small town america including exploring deeper and more complex situations and emotions. The was a very good start, and is interesting from a historical perspective, but as a fiction novel is lacks emotionality.

I guess the thing I missed most is an exposure of the humanity of the protagonist. Instead of being fully human, she seemed to be a thing used to expose small town 1900s America.

The narration is clear with good pacing but mildly uninspiring.

Yes, small town US had and has issues, but some more nuance and empathy would increase the experience of listening