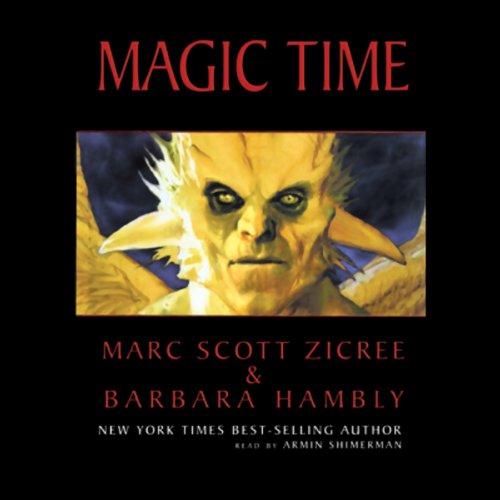 When an overworked team of government physicists unwittingly invites something catastrophic into the world, rising young New York lawyer Cal Griffin is forced into a strange new role in a world of nightmare and wonder.

A spinster schoolteacher, a lonely miner, a refugee doctor, a visionary street person, and a brooding Secret Service agent all share a staggering responsibility with the young attorney to make sense of the surreal chaos and to follow an awesome destiny, for they are to be soldiers in a titanic battle between darkness and light.

And its raging hell fires will affect the most astonishing transformation of all, turning a young man of pure heart into that rarest of creatures: a hero.

"Sheer entertainment, this book is a rousing success." (Booklist)

"One of the most interesting and promising new fantasy series to come along." (Orlando Sentinel)

The premise of this book is interesting, however the recording is abysmal. It sounds like the reader used a voice activated mike to record it. There is noticeable background noise while his voice is audible then during a mid-sentence pause the mike shuts off and there is an eerie silence followed by his voice and noise resuming. This gives a staccato effect to his reading with sudden changes in pitch, volume, and cadence. I could only listen for an hour. I will buy the print edition of this book.

I have to agree. The recording transitions are indeed awful and distracting. I thought my mp3 player broke at first. Once I got over the readers transitions between reading sessions, the story picked up for me. I assume the big differences in voice tone is caused by going for a smoke outside in the dead of winter and then returning to work too quickly not allowing the cords to loosen up again. After making it through to the end, I realized that it wasn't. The last chapter is missing. There was too much answered to stretch to another book and too little left not to finish it. Even so it was fun getting there, even though ultimately disappointing at the abrupt ending.

The most important part: the story is very good. There've been dozens of books based on the idea of magic somehow re-emerging into our modern world. This one is a very creative, very interesting take. It's very well done - it actually considers how things like transportation, food supplies, and economics would be affected. But it doesn't focus on those things - they're just part of the background - but as a part of the background, they help drive the story, and make it feel much more real.
The story itself is fun. It's got interesting, engaging characters, with multiple plot threads that intersect in believable ways.
But on the downside, the recording is the worst I've ever heard. It sounds as if random sentence fragments were recorded at different times, and then re-assembled. It's got awkward edits all over the place, and the narrators voice frequently changes pitch and speed in mid-sentence after an audible click as they switch between different recorded segments. Armin SHimmerman manages to give the different characters very distinctive voices, which is good. But either he couldn't read a single sentence without making an error, causing everything to be spliced from multiple takes, or whoever managed the recording process didn't know what they're doing: at times, it's actively painful to listen to.

I read some of the reviews before downloading this book and I have to ask if they listened to the same thing I did. The story is probably good, but the narrator is one of the worse I've heard. He seems to ramble at times (the voices are a joke) and doesn't use the concept of a pause to move from one scene to the next, but instead pauses in mid sentence when it isn't necessary. I've put this down twice but am determined to finish it since I paid for it. Don't publishers of audio books listen to the product before releasing it? Not in this case.

Is This For YOU?

If you want depth of characters, an intertwining plot that rides the cusp of both the supernatural and science as we know it...if you want expresive "pull you into the story" writing...if you long for an audiobook that has a rich variety of characters, sharing with them their thoughts and passions...if you liked Stephen King's apocalyptic "The Stand" and want fantasy characters blended in...this is for you. I read this book in it's first printing, and was very pleased to enjoy the story once again by audiobook. The narrator offers a supurb variety of dialects. This is worth the listen, as is the entire trilogy. Enjoy!

This was the worst listen I've had in 6 years of listening to 2 books per month. It did not make sense, rambled on in between bits of theme. Finally it just ended.

This is an engaging and interesting fantasy. Mr. Shimmerman's reading is, however, dismal. Everything negative the other reviewers have said about him is correct. He's a pretty good actor, but, to use an acting analogy, he "phoned this in." Having purchased it, I went ahead and suffered through his reading. I'd recommend READING this book (or have a 12 year-old read it to you), then return to listen to parts 2 & 3 which thankfully do not feature this narrator at all. I echo the previous reviewer: does anyone LISTEN to these audiobooks before they decide to market them?

An amazing story can't wait to listen to Angel Fire!!!
Armin Shimerman killed it with the narration.

Be patient with book's beginning-adventure unfolds

Initially I found the beginning of this book to be confusing as it jumped around to what seemed to be disparate locations and characters. What appears to be disjointed will unfold to be connected if you give this adventure time to unfold after the initial character introduction chapters. So be patient and enjoy what turns out to be the creation of a fascinating landscape with interesting characters created by "The Source." You will be pleasantly rewarded.

But not executed well at all.

Started out boring and slowly picked up speed toward the ridiculous. Also, the manner in which the characters stories switched back and forth from one to the other in this particular book would probably be better suited for the written word.

I am pretty certain that I would not have enjoyed this book in the written form either, though.

Fantasy at its best

Gripping listen from the first to last

I have been a great fan of Barbara Hambly in the past so I was looking forward to listening to this book. Sadly I found it confusing, fragmented and really rather derivative in the end.
Armin Shimmerman is an excellent actor, but I found his reading of this book really poor, and his accent grated rather. Each time he did a different character he used a strong southern accent which was not only rather odd, but made telling the difference between the large number of seeming unrelated characters even more difficult.
I wasn't able to finish this book, which was a great pity as some parts (like the spectral bison at the start) were really interesting.