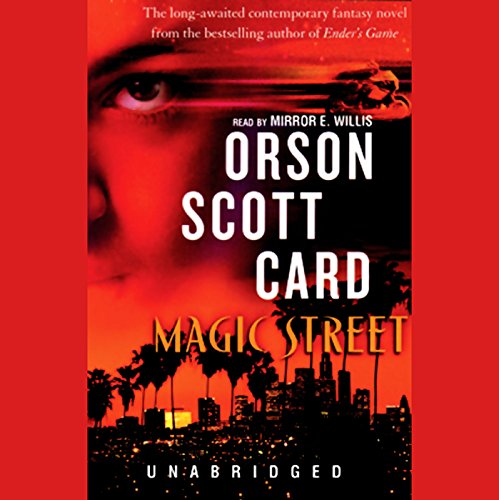 Living in a peaceful, prosperous African-American neighborhood in Los Angeles, Mack Street is a mystery child who has somehow found a home. Discovered abandoned in an overgrown park, raised by a blunt-speaking single woman, Mack comes and goes from family to family, a boy who is surrounded by boisterous characters and yet deeply alone. But while Mack senses that he is different from most and knows that he has strange powers, he cannot understand how unusual he is until the day he sees, in a thin slice of space, a narrow house. Beyond it is a backyard, and an entryway into an extraordinary world stretching off into an exotic distance of geography, history, and magic.

Passing through the skinny house that no one else can see, Mack is plunged into a realm in which time and reality are skewed, a place where what Mack does seems to have strange effects on the "real world" of concrete, cars, commerce, and conflict. Growing into a tall, powerful young man, pursuing a forbidden relationship, and using Shakespeare's A Midsummer Night's Dream as a guide into the vast, timeless fantasy world, Mack becomes a player in an epic drama. Understanding this drama is Mack's challenge. His reward, if he can survive the trip, is discovering not only who he really is but why he exists.

Both a novel of constantly surprising entertainment and a tale of breathtaking literary power, Magic Street is a masterwork from a supremely gifted, utterly original American writer, a novel that uses realism and fantasy to delight, challenge, and satisfy on the most profound levels.

"[Card's] prose is a model of narrative clarity; the author never says more than is needed or arbitrarily withholds information; yet even a simple declarative sentence carries a delicious hint of further revelation." (The New York Times)

Being a fan of both Orson Scott Card and urban fantasy, I had to listen to this title. It starts out well and, like every Card title, it has some very well-developed characters, but eventually it turns into something much less like what I've come to expect from OSC and much more like S.P. Somtow's Valentine books. The Shakespeare references, the portrayal of Christianity as a front, and the vagueness of the parameters and functions of magic all reminded me of Somtow.
Worth listening, but not on the same level of excellence as his SF. Charles DeLint has little to fear.

Not Science Fiction, but fantastic story

This is not typical OSC, and I have read/heard most of his fiction. This story was fascinating. The narration (character portrayals) by Willis were superb. If you want science fiction, this is not for you probably, but if you like Koontz, as I do, then you will probably enjoy this book as much as I did. This is the first title in 3 years with Audible that I have listened to twice.

I am a huge fan of Card's, but this was a very disappointing book. The story had a lot of potential but the dialogue was TERRIBLE.

When I got done I needed a nap

I like Card - always have. I like his dialogue and the pace of his stories till...he starts trying to define his story's version of the universe and the meaning of life or religion as very longwinded subplots. I also hate when writers try to redefine God and the nature of faith to fit their fictional landscape. There are times and ways in which an amusing read should just be an amusing read.

In the end, the fact that a writer wants to figure out rules for his hypothetical unviverse simply doesn't mean I want to sit through the explanation. I think I'm not alone in this which is why the majority of us choose not to learn Klingon.

See? Now I'm too tired to talk about the rest of the story. Next time I hope Orson just tells the story and lets us make our own observations about deeper meanings as we read or listen. The story should create questions and answers without so obviously trying. Night night.

I've enjoyed other books by Card, but this one was weak. It was as if he was deperate to write a book no matter how bad it was. At the end he claims he wrote the book to please a friend who wanted a book with a Black hero in it. Sadly the only way he could think to accomplish this was by plagerizing a Mid Summer Nights Dream. He took the characters and brought them into modern times as African-Amerian fairies.

The book itself was long, boring, the plot was too broken and anti-climatic. If you did nothing more than listen to the first and last hour of the book you would have the best parts of it.

This is the first Card I've listened to and I found it very enjoyable. A good escape from everyday life and not too 'heavy'.

This wasn't quite as good as some of OSC's other stories, but I still enjoyed it and found myself wondering "What on earth is going on here?" It kept me guessing and was someone original.

This is the first book I have read by Card. I really enjoyed that it was different from other books that I have read; it was refreshing. I think most readers would enjoy this book. However, like I said, I have not read any of his other books and have no room for comparison where that is concerned.

I purchased this book because I loved Orson Scott Card's previous work, but I was definitely let down. Card says in the afterword that he had a friend keeping him true to the African American experience and dialect, but that friend must not have been paying much attention. The characters are flat, while the dialect is outdated and overpowers the story.
The plot is loosely held together by mythical characters adapted from "Midsummer Night's Dream," who advance the story through the use of magic. I love fantasy, and I have no problem reading about magical people and creatures and their adventures. However, in this story Card uses magic to distract us from the fact that nothing is happening and the characters aren't interesting.

It was a fun listen and a welcome addition to the SF/Fantasy genre - a genre that sorely lacks African American characters. That said, for me, there really weren't any surprising twists in the story. It was a fairly predictable fairy tale. But, as I said - it was fun.

Beautifully narrated, with an unusual story. This kept me very well entertained.
In his afterword the author speaks of trying to write a book with a black hero.My impression is that he has caught the right voice