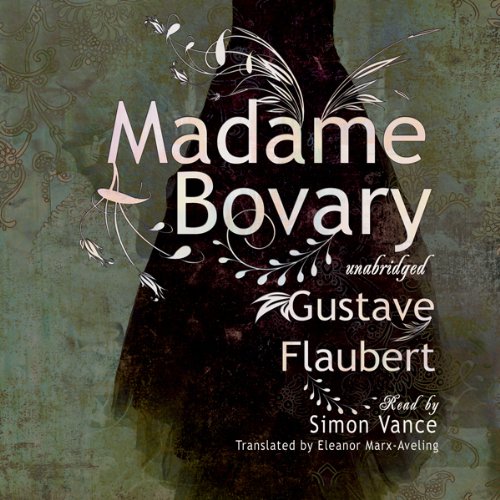 Emma Bovary is a sensuous and sentimental young woman whose romantic ideals make her dissatisfied with her humdrum married life. In an attempt to escape into an exciting world of passion and dreams, she drifts into sordid affairs with Rodolphe Boulanger and Leon Dupuis. The first of these lovers, an older man, dominates the affair, while the second, inexperienced and young, is dominated. The eventual collapse of Emma's romantic dreams is inevitable, and her disillusionment leads ultimately to her doom.

A brilliant psychological portrait, Madame Bovary searingly depicts the human mind in search of transcendence. Acclaimed as a masterpiece upon its publication in 1857, it catapulted Flaubert to the ranks of the world's greatest novelists and ushered in a new age of realism in literature.

Public Domain (P)2009 Blackstone Audio, Inc.
"It still astonishes. If one were to ask, 'World, which is the most perfect novel ever written?' the world would immediately answer: Madame Bovary. " (Washington Post Book World)
"Madame Bovary is like the railroad stations erected in its epoch: graceful, even floral, but cast of iron." (John Updike)

A masterpiece. The narrator does it justice.

Of course a book like this is a must listen especially if you have not read it.

All depends on the performance and here the narrator doesn't disappoint.

I have read this a few times and it was a pleasure to find that listening to it brought a fresh perspective. It is a good translation which does Flaubert justice.


If you don't know the story you have a great pleasure waiting for you.

This was the first book I downloaded from Audible, because a friend of mine was also reading it. It's been years since I read Madame Bovary and I was captured all over again by its brilliance and incredible language, scene setting, character development... Simon Vance's reading voice is perfect: comforting, articulate, soothing. Just a true pleasure.

Lessons learned in 300 pages/11 hours: Bored French women are trouble. Men are NOT to be trusted. Doctors don't know jack. If you want your kids to have a good job, raise them to be pharmacists or pawn brokers. Don't buy crap you can't afford. Don't get into debt. If you are going to kill yourself, do it right. Hide your notes. Marry for love.

Simon Vance does it again!

Madam Bovary is a masterpiece of literature. He carefully constructs a scenario which draws the reader into a deeper understanding of the "human condition" with vibrant characters, wonderful prose, and commentary on the yearnings of the human heart.

What other book might you compare Madame Bovary to and why?

Thatcher's "Vanity Fair" discusses the same issues, yet with a satirical wit, that ultimately draws the reader in.

Simon Vance is a wonderful narrator. His voice and elocution is easy on the ears and his performance speaks to his grasp of the writer's intent.

Relistening with another narrator

I trudged, and struggled, and persevered through this version with Simon Vance narrating. Although I've enjoyed Mr. Vance's narration on other titles, those with male primary characters as it happens, I just couldn't stand this book with him reading it. All the way through to two-thirds done, I thought it was the book I hated, but kept going because this book is so highly esteemed by so many people. The reason I want to read it to begin with is the fact that I found it appearing at the number one place on several online lists of the greatest books ever written. In fact the first book reader I know to whom I mentioned my list of classic books to read, said that it was his favorite book of all books he'd read. So, why do I hate it so? Perhaps I'm just a bit thick, but it was not until today that I thought to listen to samples of other narrators reading it. I got it into my head that I required a female voice for this book. In fact, I'm convinced, though I haven't put it to the test yet, that this book must have a woman's voice, though written by a man and not exclusive in female and male characters. I listened to samples of perhaps 9 of the versions available here (how splendid to have so many to choose from) and chose Davina Porter as my voice of choice. My review of that version will tell the tale of whether it is indeed Madame Bovary herself whom I detest or simply the particular voice who speaks her story. She certainly can not be blamed for that. Perhaps in the edition I've chosen she will shine as brightly as reported by others who've read her legend. I'm also entirely chuffed that my chosen version is a full two hours longer than the average play times of all the others. In printed books, movies, pieces of music, and audio books the longer the duration the more pleased as a cat with a canary am I. Now, time will tell.

Great Classic for the romantic at heart

Great Classic for the Romanic at heart.
I had not read this in school so finally got to it and realized it was a simple yet pleasing novel on what we would see today as a simple love, yet in the time this was a toil of near Spakespearian tragedic.
What woman would not wish for a man to love her as Emma was loved in her last.

Flaubert's use of language is fantastic. His old fashioned idea of womanhood is a bit trite, but the rest was compelling.

I am not familiar with other works by this narrator, so he may be amazing elsewhere, but his characterizations in this performance really hampered my enjoyment of the book. Everything Emma Bovary says is delivered in a breathy whisper/whine that makes any subtlety or variation that may be written into the character simply vanish. What comes through is a petulant little girl who has the same whiny tone when begging her husband for more money, telling her lover that she wants to meet up with him, or buying a hat.

I understand Emma is not meant to be a very sympathetic character, but this is a chore to listen to. And don't get me started on the number of times something or someone is referred to as "the poor..." In this translation and production, every single person and object appears to be utterly pitiable, and it gets tiresome.

This was a big disappointment, having heard how great the book is. "Greatest novel ever written." But why? I liked the delightful naturalistic observations of plants, light, subtle details. But there were two problems: Charles is so dull, and Emma is an unsympathetic, uninteresting character. She is beautiful and superficial. I never engaged with her at any level, never cared what she did, what happened to her, had no empathy or interest in her. And certainly there was little else to do after that--the towns and other characters are of no interest either.

A wonderful classic. This is a simple but exquisitely crafted novel with beautiful prose. Wonderful descriptions of provincial life and insightful portrayal of the banalities of everyday life. I can thoroughly recommend this download - a definite must for the discerning listener!

As much about Homais the chemist as about M Bovary. Both characters are uncaring of those around them, people get hurt because of their actions but somehow there is more sympathy for her. He seems so sure of everything and she is constantly lost and dissatisfied. He ponders and plans while she dreams and reacts. Beautifully written and a fascinating time for writers, Dickens and Elliot were going strong over here and there's much to compare. Certainly a classic

Another classic that must be read

Madame Bovary is a book we all should read or listen. The story is catchy, we want to carry on listening to it in order to know how it's going to end. Narrator is good as well. It's not a long book. Flaubert is great.

The book is beautifully written, with fantastically detailed accounts of the French countryside and the people, warts and all. In the days before cinema, books had to paint the backdrop with words and this is a wonderful example although it sometimes became a bit tedious.
I don't know whether it was fashionable at the time for French writers to depict the peasants as mean spirited and grasping, or if they really were like that. Not one character in the book is likeable but in particular Madame Bovary is so horrible that I couldn't help wondering if Flaubert disliked women in general, or if such an unrelenting lyrics selfish and mean person could really exorbitant.
I enjoyed the book but was glad when it was over

Well narrated but not an exciting book

Very little happens in this novel and the characters are not easy to like. It isn't really an insight into a slice of life in France either.