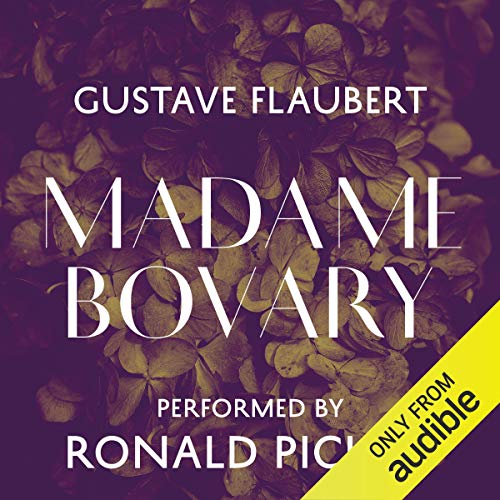 Before marrying, Emma Bovary believed she would enter a life of luxury and passion like the sentimental stories she'd read in her novels and magazines. Now married to an ordinary country doctor her life is not the romantic ideal she imagined and seeks an escape through having extra-marital affairs. This devastating spiral into deceit and despair leads to catastrophic consequences.

Emma Bovary continues to be enjoyed to this day because of its profound humanity, still as fresh today as when it was first written. But when first released in instalments in the Revue de Paris, the French government accused Flaubert of obscenity. However, the trial that followed and Flaubert's acquittal, only served to increase interest in the story when released as a book, leading to it becoming a best seller in 1857.

Considered Flaubert's masterpiece, the audiobook is an important piece of literary realism and one of the most influential literary works in history. It remains unsurpassed in its unveiling of character and society with its wonderfully subtle understanding of human emotions.

I don't always prefer audiobooks, but I prefer the classics on audiobook, I feel like good narration helps bring you back to that time and suspend disbelief. This is a perfect example.

This is a great story, with great characters, but that aside, this narrator really brings it out. If you're like me where a narrator makes or breaks an audiobook, you won't be disappointed with this one. I was surprised to see that he has a short list of audiobooks to his name.

Somewhere in the universe, Flaubert is smiling...

...to hear the sound of Ronald Pickup's deft Bovary character interpretations, whose cadence, rhythm, and intonation are nothing short of masterful. My only regret is that no other Flaubert offerings are entrusted to him. This one is a must-listen!

This timeless story is read beautifully and engagingly by Ronald Pickup. His interpretation and reading made me laugh out loud while driving through oppressive traffic. I strongly recommend this audiobook based upon both the translation and the narration.

Emma is a very complex character, who I can relate to and who I despise at the same time.
It’s been years since I stay up till 3 a.m. “reading”.
But even the most amazing book will not have the same impact without a very artistic narrator. Well done!

MUCH BETTER THE SECOND TIME AROUND

Surely there is no more exciting and pursued emotion than “being in love.” Flaubert’s classic MADAM BOVARY reminds us how fleeting and dangerous this emotion can be, especially after lovers become satiated and then bored with too much familiarity. To his credit, considering his time period, he also shows us, that prostitution is an equal opportunity behavior for both sexes and arranged marriages do not always result in learning to love.

From the beginning we know that the marriage of Emma and Charles is doomed from the first. Emma’s convent education had exposed her to the fine arts and books about handsome knights on shining white horses pursuing beautiful ladies while Charles’ education, arranged by his mother, was limited to memorizing his way through the required tests for a medical license. His mother had arranged his marriage to an older widow and Emma had returned home to her father’s farm when she left the convent. Charles was captivated by a beautiful young woman and Emma was looking for a way out of the dull boredom of farm life. And, so after the death of his wife, they were wed.

Boredom can be a great motivator for the immature. Emma seeks to relieve the boredom by pursuing the excitement of “falling in love” and of spending money. Sound familiar? Charles loves his beautiful young wife. Both end up in tragedy.

Flaubert is an outstanding writer. His descriptive prose is a pleasure to hear. His book is better appreciated by mature readers than by high school seniors and college sophomores. It is a fine listen with a very good narrator. Enjoy!

The Lady who Loved too Well

Flaubert's extraordinary language thunders through in this excellent English translation of a woman whose ambitious love could not be contained by her out-of-the-way village. The tale excels in subtle characterization of individuals whom you've met before.
Ronald Pickup, the reader, is one of the very best you'll hear. His dramatic intonations give life to the characters and his pronunciation convinces you of authenticity. He's the perfectly complement to Flaubert.

Where does Madame Bovary rank among all the audiobooks you’ve listened to so far?

This is such a wonderful reading by Ronald Pickup - and of course, the story is a classic for good reason. I did not want it to finish...highly recommended!

Would you listen to another book narrated by Ronald Pickup?

The narrator did a good job.

I thought this book was just ok. Hard to follow at times.

Flaubert is justifiably lauded for his magnificent work, Madame Bovary. She is a creature of her time and class and as such could not exist in today's world. But she is recognisably human and so beautifully written that we cannot help but gasp as the story plays out.

All the surrounding characters, particularly Charles, the unwitting husband, Rodolphe, the corrupting neighbour and Leon, the ardent lover, are depicted entirely believably. The surroundings are an enormous canvas painted in great detail.

Mr Pickup hits verbs head on in a sensuous read that caused shivers unexpected from such worthy classic edification. It's very enjoyable.

This reader is extraordinary! He could read almost any book and make it come alive.

What does Ronald Pickup bring to the story that you wouldn’t experience if you just read the book?

Depth of emotion and character development

Ronald Pickup gives an absolutely first class performance - clear engaging reading, wonderful characterisation of the dialogue, and authentic french pronounciation when necessary. A real pleasure to listen to. And the book itself - it's hard to like, let alone admire, any of the characters, and the unfolding of Emma's married life is like watching a train wreck in slow motion. But it's so gripping, and the characters are so real, so fully human. Their individual psychologies are so honestly written and so resonant for a 21st century reader that it was always something of surprise (as a first time reader of Madame Bovary) to recall that it was written more than 150 years ago. Highly recommended.

An animated and charming narration which sweeps you way back to the novel's nineteenth century contextual setting, vividly evoked from beginning to end.
Ronald Pickup is a talented storyteller and a pleasure to listen to!

I really enjoyed the story, however, it was brought to life by the amazing narration of Ronald Pickup. He is the best narrator that I have listened to on Audible.

What does Ronald Pickup bring to the story that you wouldn’t experience if you had only read the book?

I have used this audio to assist in the study of this novel. The reading is clear and the narrative comes to life through the character expressions used by the reader. The pace is good and although there are no explanations for unknown words, phrases or any historical context like there would be in a book, it is till worth buying for the enjoyable experience of not having to struggle to read the French words, even after translation!

Not the Emma I knew.

Read this book a few times, my take on Emma was totally different, the narrator made her out to be a simpering fool. In fact every woman was spoken in a wholly offensive way. Wish I hadn't heard it.

It is difficult today to understand why Madame Bovary should have caused such outrage in 1850s Paris (Flaubert was prosecuted for offending public morals) but one must remember that with greatly increased literacy rates, especially amongst women and the working classes, the authorities were concerned that popular literature should be idealistic and morally uplifting. It was perhaps as much for the realism of his writing as for the wanton behaviour of his heroine that Flaubert attracted such opprobrium in official circles.
Flaubert was a supreme stylist (a fact that I suspect may be even more apparent in the original French) and Ronald Pickup, an actor I have long admired, catches the mood of the book perfectly. His reading of the famous carriage scene, which still has considerable erotic charge, is especially good.
Although the plot may, to modern eyes, appear rather melodramatic, Pickup's excellent narration makes this an enjoyable way of catching up with a classic novel.

A beautiful piece of art and social history

This book was published in 1857 so forgive me if I spoil the ending. This is a beautiful piece of art and social history. Emma Bovary was the daughter of a farmer, educated at a convent during a time when marriage was about property, families and a dowry rather than romance. However, Emma had ideas above herself and filled her head with romantic novels. She marries a country doctor and is quickly bored with the mundanity of her husband and her life. She tries to live her dreams and fantasies with a fling that fades when she plans to elope. She embarks on a second adulterous affair and this too ends but only after she has built up debts on clothes and frippery which force her into bankruptcy and her husband's possessions being taken away. Emma kills herself with arsenic poisoning in an awful, lengthy episode which spares no detail. This is a landmark novel, often said to be the first reality novel. It resulted in Flaubert being prosecuted by the French state for being 'an affront to decent comportment and religious morality'. The book was accused of encouraging adultery and liberating women to do as they please. It also stood accused of making adultery seem attractive to women. The novel and the trial reeked of hypocrisy as adultery for men, with both mistresses and prostitutes, was well known and tolerated. It can also be argued that Emma's misery and death serve as warning rather than encouragement. Flaubert was acquitted and the book became a best seller. The novel explores the interaction of the French state, monarchy and church and characters represent the battle between enlightenment (the apothecary) and religion and superstition (the preist). All this takes place during the industrial revolution and the imminent collapse of the Second Empire. For her part, Emma is manipulated by men throughout her life, is part victim and part accomplice, she pays little regard to her child. Readers familiar with the treachery of romantic love will foresee the ending but this is a monumental novel. Ronald Pickup read all characters brilliantly.

The finest experience on Audible?

This is simply masterful; an utterly compelling experience on every level. Bravo to all concerned!

Such a great story....such a bad narrator!

I would recommend this book, but certainly would avoid this version! The narrator in his quest to "keep it interesting" or something, just made himself irritating. I found his sibilant delivery theatrical and too annoying to endure...sorry! have to delete it! :(

Couldn't abandon it, couldn't wait for it to end.

This is a celebrated classic, just not for me. The saving grace was Ronald Pickup's performance, without which, I wouldn't have been able to persevere.