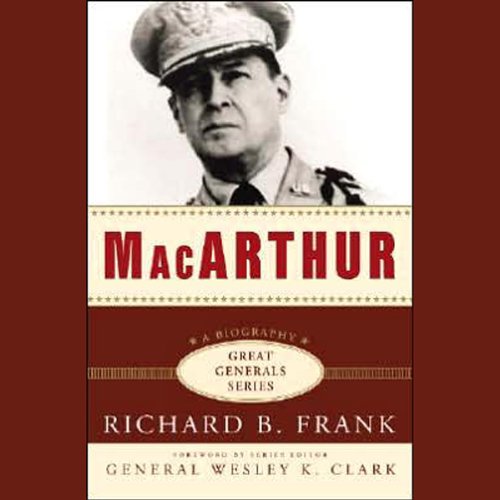 Douglas MacArthur is best remembered for his adaptability, a quality which hoisted him to his greatest accomplishments. Adaptability now reigns as the most indispensable trait for high military leadership in this era of technological leaps, which guarantee radical changes in the nature of war during the span of an ordinary career.

No American figure better exemplifies this trait than the man who was commissioned before the Wright Brothers' first flight but became a keen exponent of an entirely new dimension in warfare. MacArthur was also in charge of the U.S. occupation of Japan, the most successful occupation in history.

©2007 Richard B. Frank (P)2007 Blackstone Audio Inc.
"Palgrave's Great Generals Series is an important and inspiring contribution to our understanding of modern-day warfare." (General Wesley K. Clark)
"A classic example of good things in small packages, this addition to the Great Generals Series owes much to its author, an expert on the Pacific War." ( Booklist)

Good biography about an iconic leader in American history. This book was a good survey of his military and civilian life; though not too much on the latter. I was looking for an insightful discussion of MacArthur's life. There were several battle scenes, which are distracting but, I suppose, necessary to outline that. The author does a good job of discussing McArthur's character and his outstanding intellect. These all played a role in his enigmatic life.

Fascinating look at one of America's best soldiers

Loved this audiobook. Gives an in depth portrait of the man who rebuilt Japan. A fascinating read for anyone interested in learning about the men who shaped WW2.

Excellent book but the narration is flawed

This is an excellent book - it describes MacArthur's life and military achievements with an appropriate level of detail, warts and all. MacArthur was a very controversial personality - he excelled at promoting his own image to an almost outrageous extent and believed that he was guided by destiny. However MacArthur was a very effective military commander and achieved great success in his South West Pacific Area of responsibility under the constraint of huge handicaps. This comes out well in the book which passes the credibility litmus test for an Australian reader in that the book gives appropriate acknowledgement to the Australian military effort where that is relevant – something MacArthur himself didn’t do (and the book remarks on that).

The difficulty I have with the book’s audio version is the narration - the problems are twofold. Firstly, the narrators speaking voice is clear enough and well-modulated, however it is read at breakneck speed as if the narrator had been assigned only a limited amount of time to complete the job. At first I thought that my iPod was set to double speed – but no, it wasn’t. A huge amount of detailed facts pour forth in an unrelenting high-speed gush and the listener is left bewildered. The second problem is that half the place names in the theatres of battle are mispronounced – often bizarrely so, and this leaves the listener in a state of confusion trying to decipher where he is talking about. The publisher obviously didn’t make any attempt to properly research the correct pronunciations, which one would have thought would be an essential step for an audio book publisher. For example, Rabaul is pronounced “Rar-bool”; Madang as “Mar-dung”; Wewak as “Wee-wark”, and so on. Oddly enough, the narrator starts by pronouncing the town of Lae correctly, but then it soon becomes “Lie”!! I later figured out that he actually meant the town of “Lae”. This mispronunciation of place names is pervasive, annoying, and distracting.