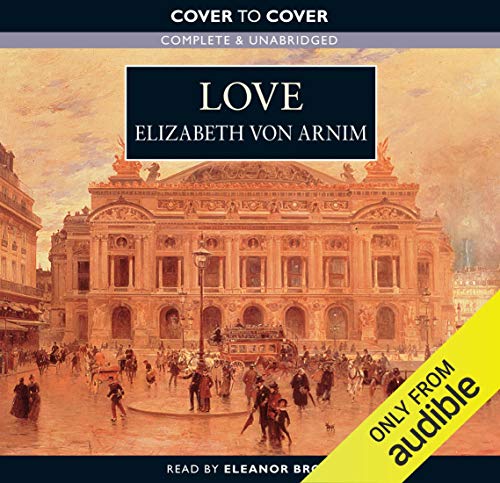 A gentle romance begins innocently enough in the stalls of a London theatre where Catherine is enjoying her ninth and Christopher his thirty-sixth visit to the same play. He is a magnificent young man with flame-coloured hair. She is the sweetest little thing in a hat. There is just one complication: Christopher is 25, while Catherine is just a little bit older. Flattered by the passionate attentions of youth, Catherine, with marriage and motherhood behind her, is at first circumspect, but finally succumbs to her lover's charms.

I read and LOVED the book but this narration was over the top fabulous and brought it home even more sweetly. Thank You!

Would you consider the audio edition of Love to be better than the print version?

I haven't read the print version, but the narrator is so superb that I think I would always choose listening to this book over reading it.

Eleanor Bron was able to subtly change her voice for each character, which made it much easier to follow who was who. She is so gifted that each different character truly came to life!

An overlooked and wonderful classic

I am not sure how or why I stumbled across this book but I am so glad I did. Brilliantly read by Eleanor Bron (surely the voice of the archetypical Edwardian lady) this is the story of a middle aged woman and the young man who falls deeply in love with her. Of course there are obstacles in the way, and naturally you will assume the relationship is doomed. But there is so much more to this book than this. This is about love in its many forms and how people are far more complicated than you initially assume. Although this book was written nearly a hundred years ago, our attitudes towards relationships between the young and old have hardly changed and this will stir you just as much as a more modern novel on this subject would.

Elizabeth von Arnim writes with charm, a deceptively delicate touch and a very sly wit that had me chuckling to myself at times. This book also has one of the most powerful and moving endings I have ever read. You will be impressed.

Hated it... Loved it

After an hour I wanted to put it down, I had no idea how, it attained a 5 star rating from a reviewer I had happened upon. On it’s opening it reads as I would imagine a bad Mills and Boon but without the sex. The main female character is always giggling and happy and the man appears to be slightly less than a man, more a boy, let’s not call it LOVE, maybe it should be more appropriately called CRUSH, or FOLLY. Why did I not like the beginning, had it been the accent and intonation of the narrator? No the reader’s voice only matched the lack of emotional depth in the text, the one hundred year old text does seem dated, while I don’t doubt that people did used to speak in that frightfully correct way, I do not believe that people thought frightfully correctly, this rankled me as the characters were not real and rounded. All this said I had paid for the novel so I was going to listen to it. However after a few hours something happens and that’s that an engaging story starts to emerge, the characters begin to flesh out, unexpected turns of events come about and some of the fluff disappears. The female lead becomes a real woman with real emotions, the male character finally does something other than just fawn. Finally the societal pressures that are talked about all throughout the book become real and have real life consequences for the characters and I found my self intrigued and a firm fan of the novel from at least half way through to the ending. I found my viewpoint flipped around from one ‘side’ to another and then to the point that I didn’t know what I thought but finally like the characters in the novel I realised that life and love is complicated. A worthwhile read, it’s a story called Love but it doesn’t read like a love story, I hope you enjoy it if you decide to give it a go.

Loved this book and one I would enjoy reading again. It was well written and a very clever but in a way sad story.

Love in a different era

Would you listen to Love again? Why?

Probably not, but that's because there's always something new to listen to, no detriment to the merits of this book

Catherine, as it was really her story.

Which character – as performed by Eleanor Bron – was your favourite?

Mrs Cahoon (if this is how it's spelled), as you got a real sense of her character from the narration.

no idea - I loved The Enchanted April as a film but couldn't imagine this book being as heart-warming or endearing as that one.

It's very easy to listen to a story like this and think it ridiculous that a 47 year old woman would be thought of as an old lady, but once you immerse yourself in the time, you begin to see how different things would be if women these days didn't use make-up, hair-dye, figure enhancing clothes etc.- how differently we may be perceived (I'd definitely be a grey-haired 43 year old!).
It's quite a sad story in many respects, but some parts told with humour and a peacefulness that keep you listening and hoping for positive ending.
The two male characters (Christopher and Stephen) are both slightly ridiculous in their beliefs and occasional outbursts but I found I had sympathy for them both.

Love Love. I felt such frustration with the characters and what they did and thought even though they were a people of their time. It's impossible not to sympathize with them. I'd never heard of the author before (I just listened to Enchanted April). The ending, I think, let's you make up your own mind about "Love" whilst it has whisked you from one view to another during your reading. I wish Elizabeth von Arnim had written more. Beautifully read by Eleanor Bron.

A bittersweet story of love

I very much enjoyed 'Love'. It's a moving story of romantic and familial loves, read excellently by Eleanor Bron.

A very interesting plot which one would think bears resemblance to the novelist's own life. A mix of the unusual with the real which keeps one in some suspense & which unearths some deep & genuine human feelings, delivered in a remarkably soothing voice.