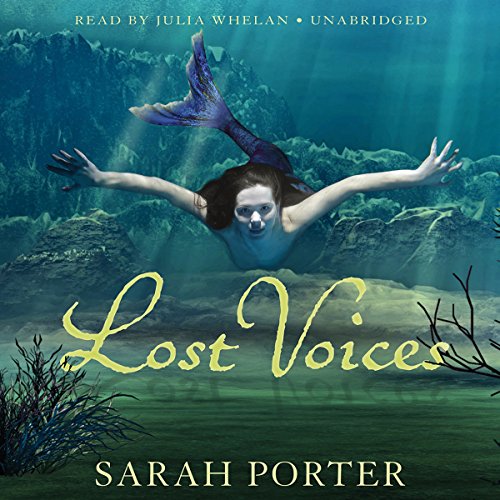 Fourteen-year-old Luce has had a tough life, but she reaches the depths of despair when she is assaulted and left on the cliffs outside a grim Alaskan fishing village. She expects to die when she tumbles into the icy waves below but instead undergoes an astonishing transformation: she becomes a mermaid. A tribe of mermaids finds Luce and welcomes her in. All of them, like her, are lost girls who surrendered their humanity in the darkest moments of their lives. Luce is thrilled with her new life—until she discovers the catch: mermaids feel an uncontrollable desire to drown seafarers, using their enchanted voices to lure ships into the rocks. Luce possesses an extraordinary singing talent, which makes her important to the tribe—she may even have a shot at becoming their queen—however, her struggle to retain her humanity puts her at odds with her new friends. Will Luce be pressured into committing mass murder?

The first book in a trilogy, Lost Voices is a captivating and wildly original tale about finding a voice, the healing power of friendship, and the strength it takes to forgive.

©2011 Sarah Porter (P)2011 Blackstone Audio, Inc.
“A beautifully written and heartbreaking story about a lost soul struggling to forgive the people she loved who wronged her and ultimately to forgive herself.” (Jennifer Echols, author of Going Too Far)

This story is great but hard to listen to in some parts. It's about abused children that turn into Mermaids, need I say more. Their stories are sad but it sends a good message. I really felt the pain of the main character Luce and can't wait for the sequel. If you have a hard time with stories of abuse though I wouldn't recommend this one for you. It's quite depressing all the way through. Thumbs up from me though.

The best part of this audio book is the reader; she did a great job. I was hoping this would have been more like the "Twilight" series, but with mermaids instead of vampires. This book is well written with undertones of violence toward girls. This is the first book of the series and is not a stand alone book. If you like the drama of teenage girls interacting with each other as mermaids, than you will like this book. I can not give this book a bad review, because I picked the wrong book for myself. I am an old guy and this book would be more appreciated by a teenage girl.

Much like with vampires or angels, the YA market is flooded with mermaids... no pun intended. And like those others, it's really difficult to find one that stands out. When something does, it's usually because it harkens back to the original lore in some way, and at that point I hope for something special. Why do I read stuff like this? Well, I typically don't, but every so often, a light read is warranted, especially after I work my way through a big history tome or something similarly weighty.

Anyway... when I think of mermaids, I think about the otherworldly beautiful and dangerous sea nymphs that lure sailors to their deaths with their music. Granted, there's a lot more essence than substance in this sort of thing, but there's always the hope somebody will expand upon it in a way that's a bit different. Lost Voices does exactly that. The characters are tragic, but it's not a story of angst for the sake of angst. It's there just long enough to set the stage, but there is rapid growth beyond that as the lead mermaid - Luce - grapples with her destiny and her humanity. Where most novels like this would sit and stew in that angst like bad fanfic, this one pushes ahead into an actual story. In a lot of ways, it's the equivalent of reading about a vampire or a fallen angel trying for redemption, and whether or not that struggle is well-written is what makes or breaks the story. This one works so far, I think.

Much like the subject matter, there's more essence than substance to be found in this book, but if you don't like the foundations, you probably aren't looking for this book anyway. It's pretty basic in its setup, character development, and dialogue, which does make for a quick read. It's also pretty clear that it's building to something bigger in the next two books of the series, so eventually I'll see how it all pans out. Where it's going isn't necessarily as important in this case as how it gets there. It's hard to judge a trilogy by its first act alone, after all.

The writing style is what truly impresses me. Sarah Porter's writing is as lyrically beautiful as the songs of her characters, and while it's not enough to make the story itself deeper than it is, it's certainly a poetic enough to make this a cut above other novels of its kind.

Julia Whelan's narration is perfect for a story like this. She plays up the young voices of the characters well, and only a couple of them are annoying (because they're supposed to be). It's a solid performance that lends to the prose style.

Both heart wrenching and heart warming

Great story about mermaids. Kind of "Rolling In The Deep" by Mira Grant crossed with " Sea Witch" by Sarah Henning. Thought provoking. The mermaids are made entirely differently than anywhere else. Well worth your time. It's like she took the most "constant" of the legends and breathed life into "why" it happens. Touches of Nemo Prince of the Sea (for us older cartoon classic lovers). Ends with a strange quietness that will quickly draw me to the next.

I really loved this. I'd listen to it while cleaning. after a while my family would start asking me questions about it.

I listen the occassional young adult book in an effort to keep up with my 12 year old niece. I purchased this book for the summer as something we could listen to while driving up the coast. I have been surprised by how good some of the series are, but Lost Voices just doesnt have the same level of writing or plot that others have- even my niece lost interest in this story. The narrator is ok, but like the writing, she lends a certain immaturity to the story and we found ourselves annoyed by the whole experience. I can't totally dismiss the author- she has an original story line and if she had been challenged to push herself, I think this would be a good book.

So sorry.. Didn`t like this audiobook. Nothing really happened.
This was my first audiobook in english.
And the author spoke nice understanding etc..
But the whole story was for me just boring. Nothing happened. And I can`t really see how this could turn into a series.

I hate ditching books. But I have to be honest..
It really dissapointed me..

But I would guys for young girls in age of 8-10 years. This might be interesting :)
Though this is not a cute mermaid story as we know from Disney.
Here the mermaids are young girls. Killing men on ships :/
Yeap.. I don`t even know what to say.. You can read my full review on my blog
~MoonStar`s FantasyWorld~