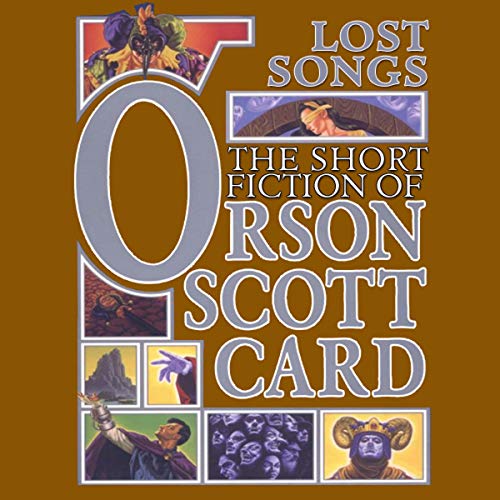 This final volume of Orson Scott Card's five-volume anthology of short works features the "hidden stories", including his first published piece, some tales about Mormon family life, and other stylistic departures, and several stories that were later developed into acclaimed novels, such as Ender's Game, Songmaster, Invasive Procedures, and The Tales of Alvin Maker series.

Watch Card craft a paranoid thriller, a spoof of "serious" contemporary literature, an epic narrative poem, and much more.

The author includes background commentaries for each story in his afterwords.

"One of the genre's most convincing storytellers. An important volume." (Library Journal)

"Definitive....A series of introductions and afterwords offering Card's thoughts on his life and his writing are as absorbing as the stories." (Publishers Weekly)

I AWAYS WANTED TO BE AN INDIAN WHEN I WAS A KID, BUT I COULD NOT GET A RESERVATION.
This is one of the best collections by one of the best writers during his best time that you will find anywhere. Most anthologies have one, two or maybe three good stories if you are lucky. This collection has seven, five star stories, including Ender's Game the short story written before the greatest Science Fiction book of all time, by the same name. None of these stories are bad, which is highly unusual for any collection. My favorite stories were: Ender's Game, Malpractice, Follower, Damn Fine Novel, Mikal's Songbird (later turned into the book Songmaster), Hitching and Gert Fram.

Mormons
The last five stories Card wrote under the name Bryon Walley for Mormon publications and are kind of like moral, how to raise your family type stories. You might want to skip these as they are not Science Fiction or Fantasy. They are not bad, are fairly short and I really liked Gert Fram.

Narrators
Rudnicki does several of these, but other narrators are also included and they are all top notch.

Audible's Categories
You will not find this book along with several very good Sci-Fi/Fantasy books under the category of Short Stories and Anthologies of Science Fiction. For the second time Audible has a category of this name and I begged them to recreate it. This book along with several others including a highly acclaimed Sclazi anthology have not been included in any category. These books sit in a black hole category of nothingness. The only way to find these books is to go to the author's site. Nor will you find who the Most Helpful Reviewers for this category are. Audible's large group of young academic editors only read Teen Sci-Fi. They don't seem to know or care about adult Sci-Fi. In order to get to the Zombie category you have to go through the backdoor and than you will only find 21 books, most of which are amateur writings or the eighth in a series. To find Zombie books, you still have to roam through the Contemporary section.