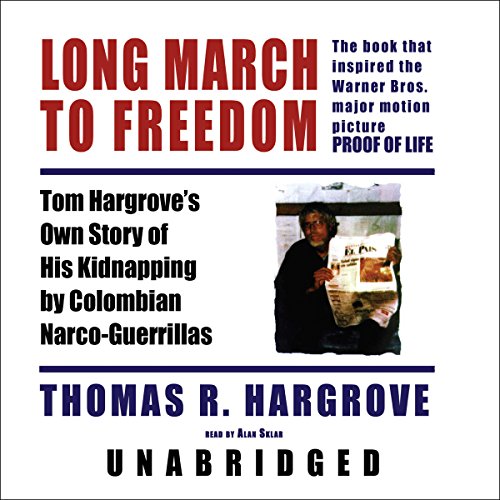 Thomas Hargrove's Long March to Freedom is a record of his 11 months as a hostage of Colombian guerillas and was the basis for the recent movie hit Proof of Life that starred Meg Ryan, Russell Crowe, and David Morse.

While the movie invented a fictitious romantic angle, Long March to Freedom is the actual journal Hargrove kept in captivity, and the listener gets a sense of the intense emotions and the tension caused by bouts of monotony broken by sudden brutality, as well as the strength, wit, and personality through which Hargrove kept himself alive.

The story is the same thing over and over. I appreciate that this fact is part of the struggle of the story, but it is just too much for audio media.

What was most disappointing about Thomas R. Hargrove’s story?

If you could play editor, what scene or scenes would you have cut from Long March to Freedom?

Twenty-one hours of waterboarding. No, not to Tom. To those naive enough to listen to his whining. Rice and pasta, pasta and rice. Those stupid, nasty FARC child hoodlums ignoring Tom's HUMAN RIGHTS. I never thought I could empathize with FARC. Tom made me come close.

I'm really sorry that Mr. Hargrove was taken captive in Columbia for almost a year....but if what he suffered was as bad as it got.....well gee whiz....seems he was out of touch with society and didn't have enough blankets at night....I got really tired of his "diary" notes which kept telling us the time of day....fifteen-forty hours...ten-thirty hours...oh twenty two hours....oh well you get the picture....and his constant telling us of his daily meals which consisted of pasta, rice and beans...sometimes a piece of fish....boring...boring...boring....

If you enjoy hearing about what this guy had for breakfast, lunch and dinner for 11 months, how much he cried, and loneliness this is for you. Was so glad when his and my ordeal as a reader was over.