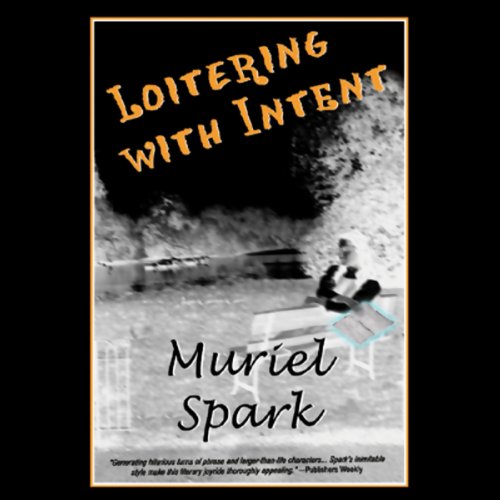 "How wonderful to be an artist and a woman in the twentieth century," Fleur Talbot rejoices. Loitering about London in 1949, with intent to gather material for her writing, Fleur finds a job "on the grubby edge of the literary world", as secretary to the odd Autobiographical Association. Are they a group of mad egomaniacs, hilariously writing their memoirs in advance, or poor fools ensnared by a blackmailer? Rich material, in any case.

But when its pompous director, Sir Quentin, steals the manuscript of Fleur's new novel, fiction begins to appropriate life. The association's members begin to act out scenes exactly as Fleur herself had already written them in her missing manuscript. And as they meet darkly funny, pre-visioned fates, where does art start or reality end?

"I read this book in a delirium of delight. In Loitering with Intent, Miss Spark returns to the early flawless form of Memento Mori and The Comforters....Robust and full-bodied, a wise and mature work, and a brilliantly mischievous one." (The New York Times Book Review)

As Good As Pym--Maybe Better!

Loitering with Intent is a smart, funny novel set in the publishing world of late 1940s London. Fleur Talbot has written a novel whose characters just happen to resemble the people she works with at the Autobiographical Society--so much so that events in the novel start to happen in real life. But while Fleur insists that it's all just fiction, her employer, Sir Quentin Oliver, goes to extreme lengths to keep the novel from being published--and to get his hands on a copy.

Spark's novel brims with eccentric characters, including Sir Oliver, Fleur's coworkers, and her various lovers--one of whom is the husband of a co-worker who has not only Fleur on the side but also a gay poet named Gray Mauser. The best of the bunch is Sir Oliver's elderly mother, Edwina, who uses her supposed senility and incontinence as weapons and who helps Fleur to get the best of everyone.

I read and loved Spark's A Far Cry from Kensington earlier this month and was eager to read more by her. Through Fleur, she's a keen observer of human nature and the foibles of polite society. Loitering with Intent is delightful, witty, urbane, and even at times downright hilarious. Spark is now right up there with Barbara Pym in my estimation--and may even surpass her.

Another Reason to Love Muriel Spark

Fleur Talbot is an aspiring young writer who is passionately wrapped up in putting the finishing touches on her first novel, Warrender Chase. Since she cannot yet rely on her novel-writing to earn a living, she is forced to take a job with Sir Quentin Oliver, at his dubious organization called The Autobiographical Association. Sir Quentin, who likes to surround himself with titled individuals, has convinced a number of them to write their autobiographies, which are to be kept under wraps for seventy years and revealed only after their deaths, but the lacklustre accounts of their lives are needing a little bit of peppering up, which is where Fleur comes in. Very quickly, Fleur comes to suspect that Sir Quentin's motives are not entirely selfless, and her suspicions are confirmed when she discovers that her Warrender Chase manuscript has been stolen, and than details from her as-yet unpublished novel have somehow been worked into the autobiographies. When life starts to imitate the plot of her fictional story, Fleur is truly horrified. A wonderful cast of characters, which prominently features Sir Quentin's kooky elderly mother Dame Edwina, who would make a wonderful protagonist on her very own. Nadia May is just perfect for this. Much recommended.

I found this book to be pleasant but insubstantial. The plot is rather silly and while several of the characters are eccentric and interesting they are not realistic enough for me to care about what happens to them. I wouldn't waste a valuable book credit on this one unless you need something to occupy you while knitting, which is what I did.

a real pleasure to hear and a good introduction to spark

I love Muriel Spark's stories.They move along at a steady pace and always busy characters.

As much a speculation about the opaque nature of fiction as it is anything else, this beautifully read short novel is a good example of Spark's distinctive style. More than most authors she asks the reader to find their own key to decipher proceedings. Set in the context of London life in the decade after WW2, is the book simply a black comedy decorated by English eccentricity? Or is it more complex? As a black comedy, how much of it is funny and is any of it disturbing. How much should the reader trust the narrator/protagonist? She tells the story, but how reliable are her perceptions? An entertaining confection from a clever writer.

Pairing Nadia May and Muriel Spark was a heavenly event. This beautifully plotted Book could not have found a better reader.

Timeless. A story that would fit in any era. I enjoyed the smarminess and wit.

For those who prefer a more cultured mystery without too much adrenaline, Muriel Spark cannot be beat. Often humorous and understated, the story keeps one's interest while avoiding melodrama and heart-pounding suspense.

A strange outing for Muriel Spark

I won't say much about Nadia May here; she is reliably fine with every aspect of her reading, as she always is.

But the book is rather odd, even for Muriel Spark, who usually has more than a touch of the odd in her stories and characters. Right through to the end, I could not be certain about the nature of Fleur Talbot, the narrator and protagonist. She is, of course, a novelist, a professional liar, so we should be suspicious of her from the start. But I could never quite decide if she's just a little self-aggrandizing or completely unreliable in giving us the connections between her novel, Warrender Chase, and the novel (or, within the fictive universe, memoir) she is recounting.

It's possible, I suppose, that (SPOILER ALERT) Sir Quentin is just crazy enough to pattern his fate after that of Talbot's Chase, but only a slight adjustment of the dates (and the book was not published until some months after Sir Quentin's odd death) would be required for the novel to have been patterned after, or revised into the pattern of, the events of Talbot's life.

And, of course, we have no information other than what Fleur gives us, and that includes a good deal aout how everyone (or nearly everyone) around her is lying and manipulating the facts to make themselves look good, or make Fleur look bad.

It is, as the bard says, a puzzlement. But it is also great fun, as Spak always is, and well worth the listen.

One of her best

Muriel Spark's Novels never fail to amuse and enrich the reader or listener in so many interesting and lively ways .This particular story is awash with sound common sense and intellectually stimulating cleverness . Read with just the right amount of zest and understanding .