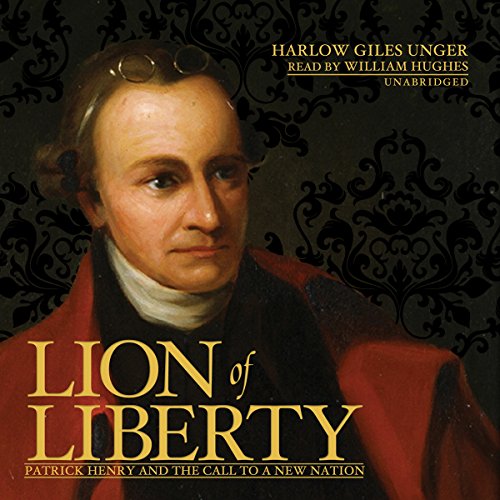 Known to generations of Americans for his stirring call to arms, “Give me liberty or give me death,” Patrick Henry is all but forgotten today as the first of the Founding Fathers to call for independence, the first to call for revolution, and the first to call for a bill of rights. If Washington was the “Sword of the Revolution” and Jefferson, “the Pen”, Patrick Henry more than earned his epithet as “the Trumpet” of the Revolution for rousing Americans to arms in the Revolutionary War. Henry was one of the towering figures of the nation’s formative years and perhaps the greatest orator in American history.

To this day, many Americans misunderstand what Patrick Henry’s cry for “liberty or death” meant to him and to his tens of thousands of devoted followers in Virginia. A prototype of the 18th- and 19th-century American frontiersman, Henry claimed individual liberties as a “natural right” to live free of “the tyranny of rulers”—American, as well as British. Henry believed that individual rights were more secure in small republics than in large republics, which many of the other Founding Fathers hoped to create after the Revolution.

Harlow Giles Unger, a former distinguished visiting fellow in American history at George Washington’s Mount Vernon, is a veteran journalist, broadcaster, educator, and historian. His books include The Last Founding Father and four other biographies of America’s Founding Fathers, plus many more. He lives in New York.

A Decent Book on an Amazing Character

Patrick Henry is one of those characters in history that many people know his name, but know little about him. Many are familiar with the line from his famous speech where he declared "Give me liberty or give me death." Few know much more about him. Harlow Giles Unger has set out to change that. In the past Unger has written about James Monroe and John Quincy Adams. In this book he turns his attention to Patrick Henry. Henry was not like a lot of his Virginia colleagues. He was not born to a wealthy planter. After failing at a few business ventures he finally took up the study of law. Before long he had established himself as a well respected attorney. Henry's strong appeal was his common sense and his love of liberty. He was a radical long before it was popular.

He was married twice. He had six children with his first wife and twelve more with his second. Many in his own time joked that he was the true father of his country. Henry was a man who believed in personal liberty. The belief was so strong that he opposed the ratification of the Constitution. Like many in his age he feared the dangers that a strong national government posed. He particularly feared the lack of a Bill of Rights in the Constitution. He was not happy that the Constitution was ratified, but he refused to oppose the new government.

Unger is an entertaining writer. If he has one major flaw it is to take the side of his subject a little too freely. In his biography of Monroe he felt the need to downplay the importance of John Quincy Adams. In his biography of Adams he builds him up as being incredibly important. One glaring example stuck out in this book. When Edmund Randolph and Thomas Jefferson gave their approval of the Constitution, despite serious reservations, Unger implies not only that Henry thought that there was a conspiracy between these men and Washington, but also that such a theory might have credence. It is absurd to imply that George Washington bribed Randolph and Jefferson with cabinet positions. No evidence is given, just a random thought thrown out. The occasional lapse aside Unger is a good writer, if a bit on the enthusiastic. There are so few books on this important founder that it is well worth checking this book out.

The early history of our nation has been something I have enjoyed doing via audible. Franklin, Washington, Jefferson, Monroe and Madison have all provided a lot I did not already know. But my new hero is Patrick Henry. I wish he had been able to convince others to follow his views on liberty and less government

In reading this book I have learn a great deal of information about the life and work of Patrick Henry. Henry was mentioned in every biography I have read of the time frame, from George Washington to James Madison, Henry was discussed in the book but only in passing. Historians have paid the most attention to the founding fathers that attained the presidency. At the bottom of the bag, nowadays are those founders who were important for a brief period on the national level but whose working career was at the local level. Henry was the first governor of Virginia. People like Samuel Adams and Patrick Henry did not get much attention.

Harlow Giles Unger, an historian and former visiting fellow at Mount Vernon, has written a delightful biography that tries to rectify the prior lack of attention paid to Patrick Henry. The author provides an insightful glimpse into the life and work of one of the most important men who helped bring about the creation of the American republic.

Unger provides an overview of the life of Henry. The book is not a comprehensive biography. The author delves into the key events in Henry’s life explaining how the episodes discussed helped to shape Henry’s work and approach to politics. The book covers Henry’s earliest days as a backwoods lawyer. Unger covers Henry’s friendships and family life (he fathered 18 children) as well as his relationship with George Washington.

What I found most interesting was the discussion of some of Henry’s cases as a lawyer. For example, Henry argues in defense of a group of famer’s who had refused to pay the Church tax to support the established Anglican Church of Virginia colony. Henry’s opposition to what he saw as both a violation of religious liberty and the freedom of the people to be secure against oppressive taxation by distant imperial and colonial governments.

Unger’s book is a fascinating study of one of the most colorful and important public men of the founding era. If you are interested in the formation of this country this is a book to read. William Hughes narrated the book.

I had very little knowledge of Patrick Henry entering into this listen. As influential as he was initially in the American Revolution, he is often overlooked today. What I liked about this book: the book did a great job of laying out the facts of Henry's life and place in eighteenth century American in an orderly fashion.
What I did not like: I did not find the book to be a particularly critical overview. It presented Henry in a glowing light but did little to go deeper in regards to analyzing his place in history.

Incredible Biography of the best of the Founder's

I learned a great deal about Patrick Henry and his amazing contributions to liberty in America. If not for him, America could have very well become another monarchy and modern day Americans would not have the libertys we have today.

A Lesson on Vigilance of Tyranny and Government

This is a great story in the life of one of the founding colonists/revolutionarys when America was founded.

Patrick Henry was a great motivator, using his words and his actions as a legislator and a lawyer. He struggled with many difficulties, yet never tired of his quest to protect the Liberties the early settlers established prior to the revolution.

After the revolution Henry provided a voice of reason and passion at a critical time in history: writing the Constitution and accepting a new form of government of, for and by the people.

He was the conscience warning all who would listen (with excellent oratorical skill) that the young country must not install a tyrannical central government that would not oppress exactly as the British Crown had for a decade or more.

The narrator, William Hughes, does an excellent job of telling the story and using his voice to draw the listener/reader into the text.

Paul Revere was a silversmith who

feared a red coat officer finding a silver ball in his fences. and then the federalists win.

Patrick Henry occupies a unique space in the founding generation. Intensely talented and largely self-taught he was firmly on the side of revolution and independence against the British but also the prominent Anti-Federalist and opponent of the new Constitution.

As a result, the trajectory of his influence on American history looks like a sharp peak with a rapid rise and rapid decline. Despite all his best efforts, the Constitution was ratified without a Bill of Rights and the vast majority of Henry's proposed amendments were rejected.

That's where Henry largely disappears from the national historical stage. Unger's brief biography fortunately focuses most of its energy on Henry's life prior to this and its enjoyable reading descriptions of his intense oratorio skills. Despite being a lawyer, he acted more than he argued, complete with glancing upward to the heavens. It makes for enjoyable reading. The inclusion of the surviving transcripts of Henry's "Give me liberty or give me death" at the end is a welcome addition.

Overall, an enjoyable bio that offers decent insights into the anti-federalist opposition.

The Lion Of Liberty Indeed!

I thoroughly enjoyed the audiobook version of this awesome work on the life of my favorite among our founding fathers, Patrick Henry. We learn about his early life growing up in rural Virginia. His career as a renown lawyer, and gifted orator. Most importantly we learn of his leading role in the revolution, the addition of the Bill Of Rights to the Constitution, as well as his prophetic vision of government power becoming too great under our Constitution. As the leader of the anti-federalists, he fought long and hard against what he believed would eventually result in the the loss of our liberty, and the sovereignty of the states. Well, history has certainly proven him right. Highly recommended.

I really enjoyed it.

This is a standard biography which I was looking for and includes contextualized engagements with other figures of the revolutionary era.