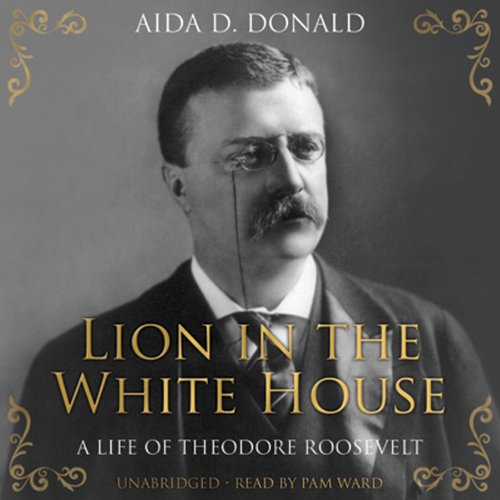 New York state assemblyman, assistant secretary of the Navy, New York City police commissioner, governor of New York, vice president, and, at 42, the youngest president ever: in his own words, Theodore Roosevelt "rose like a rocket". He was also a cowboy, a soldier, an historian, an intrepid explorer, and an unsurpassed environmentalist - all in all, perhaps the most accomplished chief executive in our nation's history.

Roosevelt built the Panama Canal and engaged the country in world affairs, putting a temporary end to American isolationism. And he won the Nobel Peace Prize, the only sitting president so honored. In Lion in the White House, historian Aida D. Donald masterfully chronicles the life of this first modern president.

This was mentioned in the Washington Post book review and I listened to it on a long car trip. I have read several Teddy books including the one on his childhood, Mornings on Horseback, so some of this I had heard before. The author did a good job of reviewing his life without getting stuck in the minute details. I thought the discussion of the political situation at the time of his prime and the cast of characters around him was the most interesting part. It is so hard to realize that he left the presidency just several years before World War I. I always thought the the fact that his youngest son died in the War contributed to his relatively early death. I toured his rebuilt house in NYC where they have lots of artifacts. There is a picture of Teddy and his brother as children leaning out a window and watching Lincoln's funeral procession going by. This book covers Teddy's place in history extremely well, and is not overly scholarly, which I appreciate.

Hero in the Making

Before reading this book, Theodore Roosevelt was an obscure President with minor interest to me. LION IN THE WHITE HOUSE reveals much about his true character and passion. I found we share the same values in multiple arenas. In fact, Theodore Roosevelt has become a hero to me.
Thanks!

Lion in the Whitehouse was interesting, but in my estimation, left the reader with large informational gaps; especially regarding TR's death. Additionally, there should be a reader warning prior to the big game hunting passage. Both disgustingly brutal and honest.

Struggled To Get Through this

There were little tidbits of information about President Roosevelt that now make me want to go find a better book on him. The narrator was hard to connect with, where at times it sounded like they edited audio clips. The impersonation of the President's voice was also hard to listen to.

Completely lost faith in the book when in chapter 6 it says the President's desk "the resolute" was given to him by queen Victoria. It wasn't, it was a gift to President Hayes 20 years prior.

Overshadowed by his cousin FDR and his niece Eleanor- one forgets the unbelievable achievements of Teddy Roosevelt-many of his causes are still prevalent today- Race relations- Immigration and Cuba are among them- Nevertheless he was a truly remarkable President!

Was written and read very well. The great look into the life of Teddy Roosevelt

Great book and pretty good naration. makes me love T.R and puts him on the top of greatest president of all time.

The book reads like a repetitive research paper and the narrator’s performance is bland. This is an easy book to fall asleep to and I did, many times, unintentionally. I would suggest skimming the Wikipedia page on Roosevelt over taking the time to listen to this book, though I think the best option would be to read Roosevelt’s own writings, as he was a phenomenal author.

A good abbreviated biography of a great man

Very good for a first timer reading about Roosevelt. It covers his major points in life, his laudable standings, and the low marks of his views. A fascinating man and a well read performance.

Really rather poor from two points of view. First, the book is to short. This great President deserves an in depth book telling his full story. Second it is far too positive and in my opinion rather biast in favour. I really prefer unbiast books and this was not. Sorry but I was rather unhappy generally.