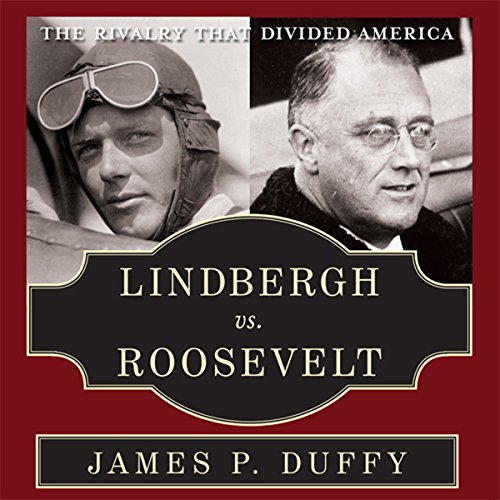 Was aviation pioneer and popular American hero Charles A. Lindbergh a Nazi sympathizer and anti-Semite? Or was he the target of a vicious personal vendetta by President Roosevelt?

In Lindbergh vs. Roosevelt, author James Duffy tackles these questions head-on by examining the conflicting personalities, aspirations, and actions of Franklin D. Roosevelt and Charles A. Lindbergh.

Painting a politically incorrect portrait of both men, Duffy shows how the hostility between these two American giants divided the nation on both domestic and international affairs. From canceling U.S. airmail contracts to intervening in World War II, Lindbergh and Roosevelt’s clash of ideas and opinions shaped the nation’s policies here and abroad.

Insightful and engaging, Lindbergh vs. Roosevelt reveals the untold story about two of history’s most controversial men and how the White House waged a smear campaign against Lindbergh that blighted his reputation forever.

James Duffy is a lecturer and writer who specializes in military history. He has written 15 books, including Target: America: Hitler’s Plan to Attack the United States and Lincoln’s Admiral: The Civil War Campaigns of David Farragut. His books have received positive reviews from The Atlantic Monthly, The Washington Post, Publishers Weekly, and more. He lives in Bound Brook, New Jersey.

Righting a wrong of history

I like books that right misconceptions or just outright fallacies of history. This is one of those books. The idea that Lindbergh was anti-semitic or a Nazi sympathizer is completely debunked, but also the author shows how a person simply expressing their opinion can be pilloried because they are in the way of a larger political agenda. The book gives great insight into the proxies FDR enlisted to discredited Lindbergh's non-interventionist views. The presentation of evidence was very thorough, especially Churchill and FDR's numerous attempts to sway American public opinion to intervene militarily. The reader comes away with the feeling that Lindbergh's views were more closely related to Washington's Proclamation of Neutrality than Woodrow Wilson's isolationism. For instance, the book outlines Lindbergh's frequent calls for a stronger national defense, especially in the area of air warfare. On other occasions, Lindbergh warns of a sneak attack in the Pacific by the Japanese. This book tells the truth, perhaps not the truth that we want to hear at times, but the truth fair or foul. Lindbergh's life of civic responsibility without compensation or political office is rightly explained for the first time.

Where does Lindbergh vs. Roosevelt rank among all the audiobooks you’ve listened to so far?

For me, it's a very good book, but not a great one.

I did not know that much about Lindbergh besides the 2 great headlines of his life (flight and kidnapping), so I found the details of his story particularly interesting.

I was so disappointed to see the petty, ugly meanness in FDR in his treatment of Lindbergh.

Lindbergh was a complicated character, but I suspect a much greater patriot and greater American than most credit to him. His self sacrificial "double agent" activities against the Nazi's are not properly credited to him by some historians.

New view of both key individuals

Duffy explores much of the Lindbergh story, and raises real questions over alleged pandering to Hitler. The countering negative views of FDR are based on little known private diary comments from insiders. I can only hope that someone can verify the content of these disclosures. The added views of Lindbergh's technical insights during his repeated annual visits to the emerging Nazi menace are very interesting.

Lindburgh was a known anti-semite. He and Henry Ford would spend hours and hours talking about their hatred of the jews. This is documented by numerous sources including Ford, yet this book tries weakly to claim otherwise.

There is a reason why Roosevelt didnt like Lindy. Lindy was a german sympathizer. Lindburgh helped Hermann Goering build up the german luftwaffe. These are again, known and undisputed facts.

This book does nothing to put Lindburgh in any positive light.

I want my money back

Another revisionist take on the 'evil' Roosevelt. Seconds into the introduction he bashes Obama. I thought this was a history of the relationship between these two men? I want my money back.

Worst thing I ever heard

If it were erased.

How could he participate in this poison.

You didn???t love this book... but did it have any redeeming qualities?

Yes. It made me aware of the visceral hatred people had and still have for FDR.

FDR's Social Security, and its orphans and widows' financial support, and later social plans, lifted our widow-oprhaned family out of the orphanage and poor house, saved us, lifted us into education worlds denied to so many millions before us. So I am sore at this stupid, prejudiced book. I could not get through 25% of it with its constant one note acid theme of trying to make FDR the great Satin. There was no balance, no humanity no intellegence of anything human about this messy book. Only neurotic, twisted FDR haters could love it.

This is not a history book. It is propaganda against Roosevelt and other prominent Democrats.

Has Lindbergh vs. Roosevelt turned you off from other books in this genre?

If you could play editor, what scene or scenes would you have cut from Lindbergh vs. Roosevelt?

Don't buy this book. Maybe borrow it from the library to avoid supporting the author. But get ready for a very one-sided attempt at writing a history book.

So let's rehash what we don't like about FDR...really? He was human.. He made mistakes. Just like the rest of us. Yet history shows that he was exactly the President we needed to guide us through World War II. Just imagine where we would be if we had lost that war. Skip this book--you've heard it all before.