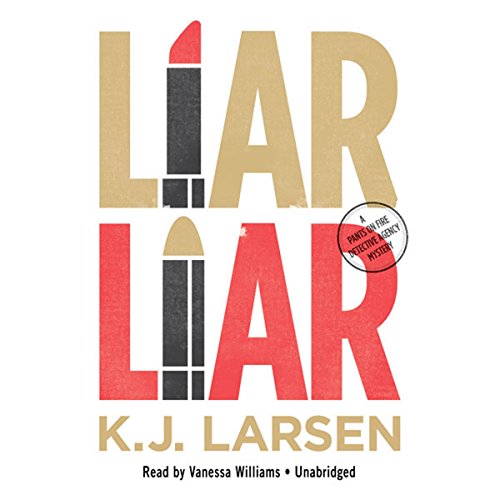 Caterina DeLuca, burned by her run-around now ex-husband, Johnnie Ricco, took the skills she mastered during marriage and opened her own private-eye agency. Now she’s armed with a camera, ready to print the evidence to 8×10 glossies for use in divorce court. The men in her big, whacko family, all Chicago cops and one a crook, aren’t sure what to make of Cat’s career choice. But hey, it’s serve and protect!

Then one Rita Polansky retains Cat. Rita’s liar-liar husband is the mysterious but seriously hot Chance Savino. Cat is hot on his heels when an exploding building hurls her out of her stilettos and into the hospital. The FBI claims Savino was killed in the fireworks, but Cat’s memory replays a different scenario.

She escapes the hospital to meet with her client, another liar. When Rita doesn’t show, Cat breaks into her home to find a dead Rita, a knife in her chest, and two clues at the murder scene: a clutch of Starburst candy wrappers - and Chance Savino, rummaging through Rita’s drawers.

As one surprise after another piles up while no one else sights Savino, everyone around Cat thinks she’s crazy - everyone except a determined killer who has put her on his “kill” list. Botched attempts force Cat to suspect Johnnie Ricco, or liar-liars from her earlier cases, or a Chicago power broker.

Can Cat, catcher of cheaters, catch a killer? And even if she does, this is Chicago, so what would she do then?

I breezed through this audiobook! K.J. Larsen had me hooked from the beginning and completely wrapped up in the story of Cat DeLuca.

The chemistry in Cat's big Italian family was hilarious and spot on. The story was action packed and full of mystery.

I thought Vanessa Hart did a great job narrating this title and I'll look for more of her work in the future.

This is a VERY frothy book, and very imitative of Janet Evanovitch and Stephanie Plum. Somebody who does not mind how derivative the work is might enjoy its similarity to Evanovitch's series.

The narrator veered between an Italian American and a southern accent. I think it would have been better if she had not attempted accents at all.

If you could play editor, what scene or scenes would you have cut from Liar, Liar?

Way too many scenes involving the mother of the P.I.

While the story was decent, I got really tired of hearing about food and shoes.

Good fun book to listen to, good narration, and enough humour to keep it interesting

Witty, fast paced, good crime drama with an excellent dash of sarcasm. If you like Sue Grafton and Kyra Davis, you will love this...