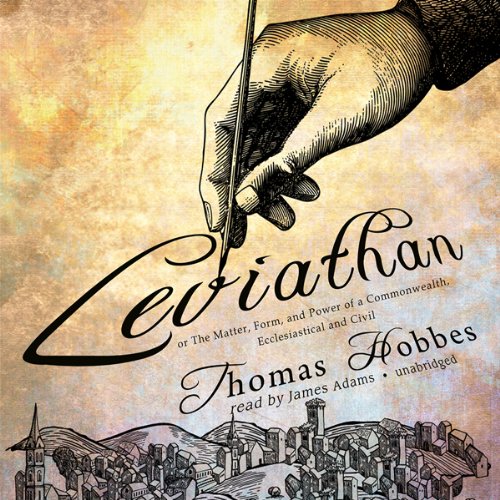 The leviathan is the vast unity of the State. But how are unity, peace, and security to be attained? Hobbes’ answer is sovereignty, but the resurgence of interest today in Leviathan is due less to its answers than its methods: Hobbes sees politics as a science capable of the same axiomatic approach as geometry.

Written during the turmoil of the English Civil War, Leviathan was, in Hobbes’ lifetime, publicly burnt and even condemned in Parliament as one of the causes of the Great Fire of London in 1666. Its current appeal lies not just in its elevation of politics to a science, but in its overriding concern for peace, its systematic analysis of power, and its convincing apologia for the then-emergent market society in which we still live.

Public Domain (P)2008 Blackstone Audio, Inc.
“Leviathan is a remarkable attempt to explain and justify the institution of government, and it remains one of the masterpieces of political thought.” ( Masterpieces of World Literature)

For PoliSci Graduate Students as a Readalong

I bought this audiobook as a readalong to the book for a graduate class in Political Theory on Classical Liberalism. The printed book is difficult and densely written, especially with odd spellings, long sentences, and intense definitions. It helps to have the audiobook playing as you read the book, to break down the sentences.

This is no light reading. It is for academicians and students only. Yet, it provides a connection between the 13th century Magna Carta or Rights of Man, and the French and American revolutions, which raised individual rights to a new height. Hobbes believes in individual rights but maintains that monarchy is the best form of central government. This connection is important to political theory, and Hobbes is its main author.

The narration is clear and with just the right affect as to delineate between concepts. The Greek in the text is ignored in the audiobook, but does not detract from the idea. Well done audiobook perfectly calibrated to the Norton Critical edition.

The Age of Enlightenment Starts With This Book

The Open Syllabus Project, the systematic study of over one million college syllabi ranks this book as the seventh most popular book cited by syllabi. After having listened to this book I know exactly why. The Age of Enlightenment starts with this book.

It's clear that the project of the Enlightenment was the dialectic of answering the pessimism of Hobbes with the optimism of John Locke. They might not have had to agree with Hobbes, but they had to respond to him.

Hobbes is very subtle in some of his arguments. The time period still believes in witches and superstition, and beliefs based on authority. Hobbes does not. The strength of Hobbes arguments is he understands what knowledge is, what absolute knowledge means, and how misleading 'belief in' and 'faith' are as foundations for understanding and explaining. Hobbes has an advanced way of putting the nature of knowledge on a firm foundation. Chronologically Hobbes comes after Bacon and Galileo but before Newton, and is laying a foundation for Newton to think of knowledge as Universal, Necessary and Certain for explaining and understanding the natural world. (Newton with his laws of gravity will see the world in those terms as will Kant, but Heidegger and Kuhn much later will show how knowledge is best thought of as particular, contingent and probable).

Hobbes is also not very subtle in some of his arguments. He is an absolute authoritarian when it comes to the power vested in the sovereign. I realize now why Richard Nixon in the David Frost interviews argued that the chief executive could not possibly break the law and why some would think the Nuremberg defense was reasonable (Hobbes would defend both). Even in all his muddle arguments sometimes real gems of wisdom pop out. For example, no man can be trusted when his job is on the line, or those who are influential and widely known are more responsible for inciting violence than those who are unknown.

There are two things I know with certainty: 1) everyone should listen to (or read) this book, 2) nobody should listen to the third chapter of this book (probably 8 hours long), the one on the commonwealth of the church. The third chapter had way too many bible verses and I would say that the Enlightenment ignored that chapter for the most part with one exception. I had just recently read the "Age of Reason" by Thomas Paine, and it is obvious to me that in his first edition of the book he took Hobbes chapter three and used that to show why the bible was not holy and he also directly restates Hobbes points about how revelation from God most always be second hand to everyone but the person who speaks directly to God. An aside, it seemed obvious to me that Hobbes was an atheist (or deist), but he never would be explicit about it. Though, in that dreaded third chapter (please skip it if you can!) he is really interested in showing why the "papist' have less authority than the Church of England.

I really can't understate the obvious importance that this book has in the jump starting of the Age of Enlightenment. The book itself can be dry (and it is dryly read), but sprinkled through out the book are real pearls of wisdom. This book deserves to be the seventh most cited book on college syllabi. My only hesitation in recommending this book is the 3rd chapter with its endless bible citations. Don't skip the fourth chapter. There is a real elegant refutation against Aristotelian thought and the danger of appealing to authority over reason. After all, the Age of Enlightenment is most readily described by rejecting authority as your primary source for knowledge and appealing to reason instead.

Many people to this day would save themselves an abundance of time looking foolish if they would simply study this book and the arguments it puts forth.

Loved the story, the manner of speech and the speed...
It is a book I will revisit later

Mr. Hobbes presents what I think were his deepest beliefs, and did so with sincerity and solemnity. Of course it is assumed that from our present day vantage point, some but not all, of his conclusions were erroneous. To clarify; he was a citizen living under a monarchical form of government, and consequently, he carefully maintained a due deference to this fact throughout the text. In addition to this, he was also beholding to the church of England (a state subsidized church).

All in all, I found Leviathan to be an excellent treatise, and Mr. Adams did a truly exceptional job in reading the text. Indeed, if I could give the performance six or more stars, I would do so!

I think there's no better way to get through this book if you have to.

One of the great ancient philosophers

Hobbes is the most quoted philosopher in the books that I read. I thought I should check him out, I was not disappointed.

glad to have read it. sheds a great deal of light on the time in which it was written. also gives a better understanding of the text so often referenced

It is easy to appreciate the influence Hobbes had on later authors, but be warned that hours of this book are devoted to Bible analysis. For those of you more interested in the political aspects, chapters 11-32 (of the audiobook) are where you will get the most out of your time. The rest you can fly through at 3x.

Omg this was boring

I loved the parts about political philosophy but towards the end it literally felt like he was just quoting the Bible for 5 hours.

Quite heavy on the religious part.

I hoped it took more chapters on human perception and les chapers about religion. Nevertheless I totally get it that it is what it is and it couldn't get any better because it is how the thinker perceive reality at that time.

Only 3/4 in does it finally become a fascinating read.
First of all almost unbearable then it seems to evolve into a very old Dan Brown novel where it finally picks up!!