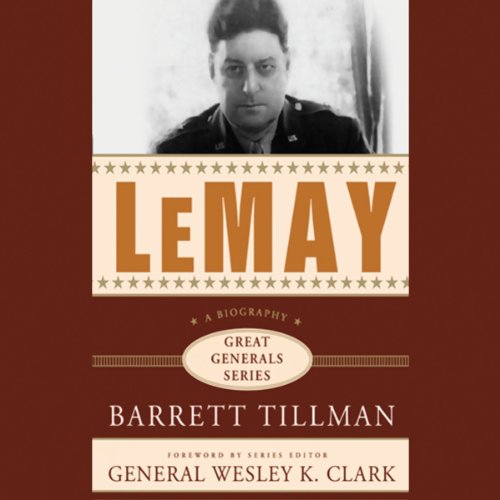 Packed with breathtaking air battles and ground tactics, this new addition to the Great Generals series features the controversial command and strategies of the former Air Force Chief of Staff.

Curtis LeMay was a terrifying, complex, and brilliant general. In World War II, he ordered the firebombing of Tokyo and was in charge when atomic bombs were dropped on Japan. He was responsible for tens of thousands of civilian deaths, a fact he liked to celebrate by smoking Cuban cigars. But LeMay was also the man who single-handedly transformed the American Air Force from poorly trained and badly equipped pilots into one of the fiercest weapons of the war. Over the last decades, most U.S. military missions have been carried out entirely through use of the Air Force. This is LeMay's legacy.

"Curtis E. LeMay...was far more complex than his detractors claim. Barrett Tillman, one of America's top history writers, gives us an authentic feel for LeMay and for the way LeMay left his mark on the 20th century." (Air Force Times)

LeMay was a Hard-Core Legendary Leader

As a former Marine, my life has been filled with Chesty Puller, Presley O'Bannon and Molly Marine for as long as I can remember. LeMay is my first introduction to leadership from the Air Force. I love reading about LeMay's life. He seems more legendary than real, a solid modern day hero. I love the stories about his ability to return his team to combat, either by giving them a mental health break or, best, by moving a mutinying bomber pilot who had crew members die on three consecutive flights to a fighter. The pilot didn't mind risking his own neck; he just didn't want to kill America's sons.

This books is chalked full of great anecdotes of awesome and inspiring leadership. LeMay was a real no-nonsense, mission-focused, tolerate no BS kinda guy. While gruff, he took recommendations, even criticisms from subordinates and implemented ideas when they seemed effective. He was at the helm for some of the most unseemly elements of America's history including the firebombing of Tokyo and Enola Gay's flight over Hiroshima, but he never blinked. He did what he thought was necessary to keep the world free from dictatorship.

He reshaped America's concept and use of air power and technology.

This book is a nice blend of facts and stories that tells not only the history, but also the mystery of what was LeMay. I'm enamored. It's a great audiobook too. Narration is smooth.

A Biased Look at A Great Air Force Leader

This book on LeMay unfortunately puts to much emphasis on the overall strategic effect of the CBO and under plays LeMay’s role in developing and implementing operations that cost a lot of Americans lives at the expense of sound judgment. Honestly the worst part is how much credit LeMay is given for instituting innovations during the Berlin Airlift - all of which are essentially stolen from Lt Gen William Tunner.

Easy read. I learned to see LeMay in a good light. I got unconfused about his role in the Bay of Pigs
Spacestationark

Great story about an American Hero!

This book had an excellent narrator. Secondly, the book is well written reflecting General LeMays life and service. Anyone interested in the man will learn much by listening!