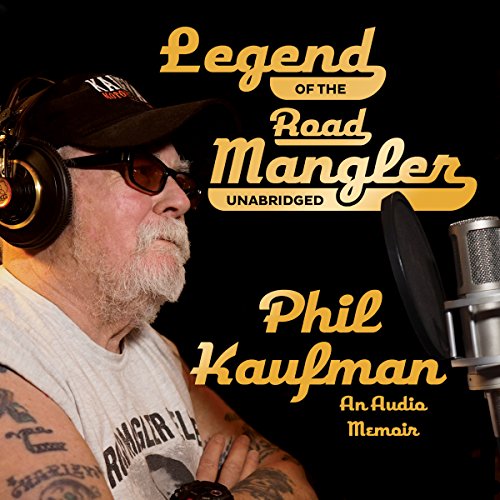 Legend of the Road Mangler

In addition to road managing, he's been an airman, an inmate, and (briefly) Charles Manson's record producer. To fulfill a promise, he once borrowed a hearse, stole Gram Parsons' body, and cremated it in the desert. You'll hear the whole story as only Kaufman can tell it, along with the voices of some of the artists who know him best. Legend of the Road Mangler is a must-listen for music fans who love to know what goes on behind the scenes, on the bus, after the show, and out in the desert.

Oh my gosh what a fun listen this was! Me being a huge Stones fan, Emmylou fan, and as Phil says it A Gram-pire, this book was the front seat ride road managing all of these great artist that have left and continue to leave an Immaculately positive mark on all our lives! Phil gives you the personal details of each artist and how they were and how they lived on the road and how he worked his most hardest and honest for each one of them. Phil is an awesome guy still to this day at 87 years young who enjoys riding his Harley Davidson's and enjoys being humble. Listening to him here makes you feel as if your in the room with him having a beer and listening to how kool his time here truly is. An awesome fact I learned about him is that he worked on B-29 Superfortress Bombers in Korea during the Korean War. God Bless you Mr. Phil Kaufman!

This is not his book

This is a rambling interview apparently based on his book. It’s ok but nothing I would have wanted to hear more of

Funny, Down to earth stories

Phil, you are such a hoot as we say here in the Midwest. I would love to listen to more of your stories. Let Milwaukee know if you'll be attending the Harley festival around Labor Day. Great book!

Great Stories of Life on the Road

This is a very conversational listen - like you are in a late night bar with the road mangler holding forth on his amazing life. I suspect most of his anecdotes are true because it would be hard to make this stuff up. Actually I wouldn't care either way as it is such an entertaining listen and a great way to pass four hours.