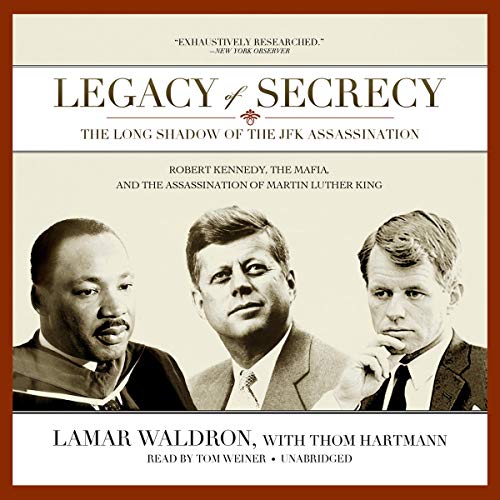 John F. Kennedy’s assassination launched a frantic search to find his killers. It also launched a flurry of covert actions by Lyndon Johnson, Robert F. Kennedy, and other top officials to hide the fact that in November 1963 the United States was on the brink of invading Cuba, as part of a JFK-authorized coup. The plan’s exposure could have led to a nuclear confrontation with Russia, but the cover-up prevented a full investigation into Kennedy’s assassination, a legacy of secrecy that would impact American politics and foreign policy for the next 45 years. It also allowed two men who confessed their roles in JFK’s murder to be involved in the assassination of Dr. Martin Luther King, Jr., in 1968. Exclusive interviews and newly declassified files from the National Archives document in chilling detail how three Mob bosses were able to prevent the truth from coming to light - until now.

With three new chapters and updated text throughout, this is a must-have edition. New material includes the completed story of how three powerful Mafia bosses used John and Robert Kennedy’s top-secret plan of staging a coup against Fidel Castro to murder JFK. Documented from the National Archives for the first time is Watergate burglar Bernard Barker’s decades-long work for the Mafia, even Barker’s time aiding the CIA with the coup plan. Barker sold out the coup plan to his Mob bosses helping to assassinate JFK, and forcing US officials previously involved with Barker to withhold key information from the Warren Commission. This version also contains important new information about the FBI informant who obtained the JFK assassination confession of godfather Carlos Marcello, which the Bureau kept secret for 20 years.

“I believe Waldron’s heavy-to-lift book is actually all but the last word on these troubling assassinations which have been so wildly speculated about since 1963…Lamar Waldron, indefatigable public servant and author, deserves his own Pulitzer Prize for his great work.” (Liz Smith, New York Post)

Couldn't get through it!

Would you try another book from Lamar Waldron and/or Tom Weiner?

It was read to fast. Way to many characters

Read the prequel maybe will help

Put slimply, one of the best books concerning the assassinations of JFK, RFK and MLK I have ever read. If you want to start to grasp the web that covered the White House, the Intelligence Services, the Pentagon, the Cuban Exile groups and Organised Crime and so perpetuated the deliberate distortion of the truth, this book is a excellent place to start.

I'll have to go through this at least 3 more times. So many things about these plots you had no idea about. Truly well done research.

Those who say these are conspiracy theories have no clue at all!