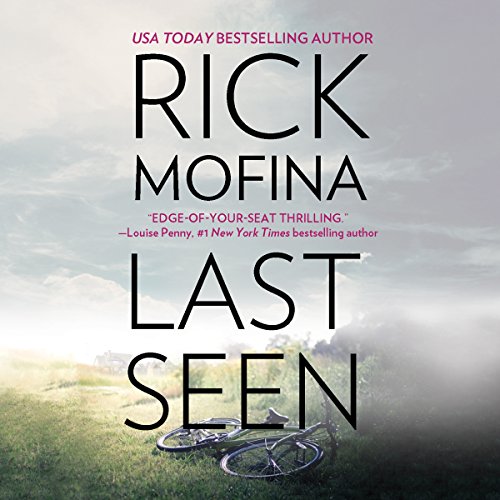 Cal Hudson knows the world can be an ugly place. As a reporter for a big Chicago newspaper, he's journeyed into the darkest corners to expose the vilest crimes, but the world he and his devoted wife, Faith, share is much nicer. They've made sure of it, creating a tranquil haven in suburban River Ridge to protect their precious nine-year-old son.

But then the unthinkable happens: he vanishes. In a split second at a local carnival, their storybook world begins unraveling.

A frantic search starts to uncover splinters in their carefully crafted facade, revealing buried secrets that cast just as much suspicion on Cal and Faith as on any ill-meaning stranger-proving that the line between love and violence can disappear just as suddenly as a child on a chaotic midway.

Your past can always find you...

In Rick Mofina's newest book, as in all of his others, the protagonist is a crime reporter (Cal).
When Cal, his wife Faith and son Gage go to a carnival they go into a House of Horrors. At some point during the last portion of the amusement, Faith let's go of Gage's hand and he lost in a spinning room with multiple exits.
The following morning both parents are taken to the police station and speculation begins.
Many secrets begin to come to light. Faith was having an affair. Cal might be applying for a job in Kuwait, but only has passports for him and Gage. Was he planning to sneak away with his son to one of the few countries with no extradition? Or maybe the parents aren't involved at all. Could it be retaliation for s story Cal wrote in the paper or Maybe there is something much darker going on... but I can't even hint or it could spoil it for someone else.
This is a very good book by an author I have come to expect nothing but a good book from. There are lots of outcomes with plenty scenarios, plot twists and possibilities. I am disappointed because I was looking forward to another addition to the Jason Wade series. I sincerely hope the there will be more to that series.
Susie Berneis does a very good job narrating. I do think one of the male narrators (Christian Rummel or Paul Costanzo) used for his other books might have been better suited.
If you found this review helpful please indicate so.
Thank You.

This one tears at the heart!

Audible listener Shelley posted her review of Last Seen just as I began to write my review. Her review is excellent, so just read it.

With Last Seen Rick Mofina has written a very strong psychological thriller. He is simply one of the best mystery/thriller authors. Narration is excellent.

The narrator really needs to work on her male voices! Imagine a whisper with a frog in his throat - that's pretty close to how it sounded. Very distracting. Otherwise a good book. 3.5 stars

The narrator is clearly very talented, but the very unnatural, low, growly voice for the cops is extremely annoying. She is excellent otherwise. (Anything that sounds fake is a bad idea.) I hated to write this because she has great skills. I just think this was a bad choice.

I enjoyed the book...but would be better to read it as I did not like the narrator.

Kept me interested the whole way through..but as I said..I did not care for the narration

Edge of your seat

I thought this might turn out to be a terrible story but in the true Rick Mofina fashion he turns it into an edge of your seat page turner. Excellent story!

I titled it "So Good" but oh my, everything he writes is good! Love the Tracy Crosswhite, Tom Reed series and everything else I have listened to by Mr. Mofina. I am always amazed when a law enforcement character is interviewing a suspect. The questioning is so thorough, the background information so realistic. Very talented writer. Narration very good also.

"Last Seen" by Rick Mofina is as unpredictable as comforting and entertaining Rick Mofina's audiobooks usually are. The audiobook pulls at your gut, eliciting a guffaw or a howl every now and then, and is well narrated with characters you may like or dislike. Human foibles are laid bare as the story unfolds; so is a spirit of magnanimity. "Last Seen" does not disappoint. I will not spoil the game for you. Enjoy listening... even reading.