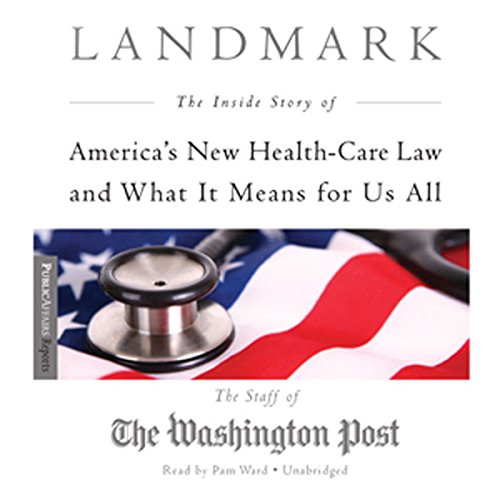 The Washington Post’s must-read guide to health-care reform traces how President Obama and the Democrats achieved this historic overhaul, explains the legislation itself, and shows how it will impact individual Americans.

After a year-long political war, in March 2010 President Obama and the Democratic leaders of Congress achieved a victory that has eluded lawmakers for 75 years: an overhaul of America’s health-care system. In this indispensible book, the staff of the Washington Post tells the story of health-care reform and explains what it means for the American people.

In the book’s first section, the Washington Post’s reporter embedded in the White House provides a behind-the-scenes narrative of how Obama and the Democrats pushed through health-care reform in the face of nearly unanimous Republican opposition. This section traces the tortured evolution of the legislation, showing how the Senate killed the public option, how the January 2010 victory of Republican senator Scott Brown left the Democrats scrambling, and how Democratic leaders ultimately negotiated among entrenched political factions—including disillusioned Democrats—to reach a compromise.

What does this final package include? The book’s second section provides an accessible summary of the legislation that Obama signed into law in March 2010. In the third section, Washington Post writers answer our most pressing questions about the health-care legislation’s immediate impact. Most importantly, how will the new law affect individuals—small-business owners, uninsured Americans with pre-existing conditions, and twentysomethings on their parents’ policies? This is a must-read for anyone who wants to understand how this legislation came into being and what the new health-care program means.

Landmark will bring the listener up to date on the Health Care Bill. A reading of this volume will enable you to understand the history, the bill, and prospects for implementation. You will be able to talk intelligently with insurance Brokers, supervisors, and others concerned about the compliance task ahead of us.

This book is Time Sensitive, so don't wait too long to download it and listen. The writing is crisp and clear. Pam Ward has another great reading. In the words of Janice Joplin "...get it while you can."

The Bill that almost wasn't

Would you recommend Landmark to your friends? Why or why not?

I would and have recommended this book to people I know working in the medical felid as I do. I believe it is a quick way to get the big picture of what the bill has in it and how it came about.

Did Pam Ward do a good job differentiating all the characters? How?

I believe Pam Ward did a fine job with the book and I would listen to one from her again.

Was Landmark worth the listening time?

I do feel Landmark was worth listening to and I have told several people to try it out. I have also posted at my grad school this might be something they should listen to.

Over all it was worth the purchase.

Ok history, strong summary of the law itself

Would you recommend Landmark to your friends? Why or why not?

I would recommend the book as a whole, but I was disappointed in the history of the passage of the act. I was hoping for a retelling that shed new light on the many twists and turns of the healthcare bill. Instead, it was a brief, potted history. Conversely, the second section of the book, which described the actual features of the law, did an excellent job distilling the law's many facets. To me, this outweighed the somewhat underwhleming historical narrative.

The writers go through great lengths describing the history of the bill, it's heated debate which rings to this day in some circles, and it's more positive outcomes.

However the book is far less acknowledging of the opposing viewpoints of it's critics, especially of the individual mandate. Asserting instead the (erroneous) assumption that the mandate is legal under the Interstate Commerce Clause of the Constitution.

In short, if you want to know only the "good" parts of the bill, this book is for you. If you want to know the real nitty-gritty underbelly of this law that has it's opponents in a furor, you'll find no answers here.