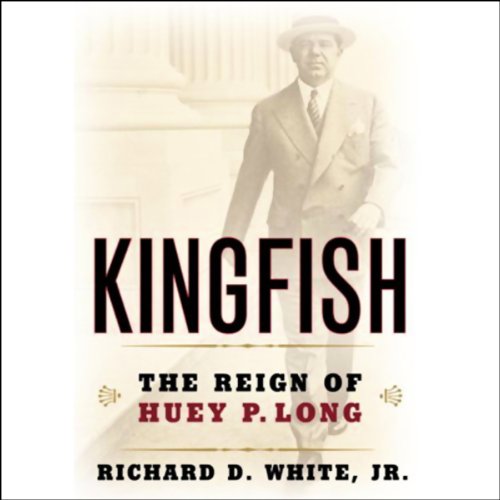 Outrageous demagogue or charismatic visionary? In this powerful new biography, Richard D. White, Jr., brings Huey Long to life in all his blazing, controversial glory. From the moment he took office as governor in 1928 to the day an assassin's bullet cut him down in 1935, Huey Long wielded all but dictatorial control over the state of Louisiana. A man of shameless ambition and ruthless vindictiveness, Huey orchestrated elections, hired and fired thousands at will, and deployed the state militia as his personal police force. And yet, paradoxically, as governor and later as senator, Huey did more good for the state's poor and uneducated than any politician before or since.

With Kingfish, White has crafted a balanced, lucid, and absolutely spellbinding portrait of the life and times of the most incendiary figure in American politics.

I got through it and I learned things, but there was a real dichotomy between the more-or-less dry recitation of facts and perfunctory retellings of anecdotes and the more forceful editorializing. The editorial position doesn't bother me -- I suspect I'd reach the same conclusions -- but it's how he arrived at them (abruptly) rather than what he said. Some of the strongest writing was in those editorial chapters, but it was all overview without giving any *life* to the facts that support it. I recently finished two biographies of John Brown and I feel like I have a better understanding of who he was as a person and what he was like to be around than I do this man who lived so much more recently.

It feels like White wrote the summary materials first and then decided to relate the minimal number of facts an anecdotes necessary to support the conclusions. And if that seems like I'm just repeating myself, now you know how it feels to listen to this book.

I'm not a stickler for straight chronological narration by any extent, but another thing that annoyed me was White's tendency to silo threads of events. It seems that one of the remarkable things about Huey Long was his ability to handle more than one thing at a time and keep a lot of balls in the air, but that's lost in his telling of the story. Early chapters talk about things that happened much later in life, but when a later chapter deals with the same era it talks about different events and never makes a connection to (if even an acknowledgement of) the other set of events that must have happened around the same time.

If you don't know anything about Huey Long (and I didn't know much when I started) this is probably an OK overview. But I'm going to look for something with a little more meat.

What does Patrick Cullen bring to the story that you wouldn’t experience if you just read the book?

He tried to bring some life to some fairly dry stuff. The only thing I'd point out is that the town of Natchitoches, LA is pronounced "NAC-a-towsh" and not the way it was being pronounced in the reading.

Did Kingfish inspire you to do anything?

I'm going to find another biography of Huey Long

Not a wasted credit by any means. Just wished it had been better.

It can happen here

Very well researched book. I recently read Machiavelli's The Prince; Huey Long took Machiavelli's practices to heart. At a time when the rest of the world was falling to absolute rulers, he ran Louisiana as governer with a iron hand, changing laws and raising taxes as it suited him. When the press railed against him, he started his own newspaper which he had distributed statewide. He also used the Louisiana National Guard as his own private police force. He continued to run the state from Washington DC after being elected to the senate where he was famous for back room deals and for filabustering sometimes for days. What I found most frightening was the fact that he had a viable plan for being elected President possibly in 1936 but more probably 1940. If this had happened, the US would be a different place today.

I listened to this book after All the King's Men by RPW. I wanted to know something about the real model for Willie Stark. I found that truth was stranger than fiction! What an amazing (and dangerous) character. Excellent writing and performance I thought.

The book is excellent. However, the man was a tyrant and screwed over his state, even after his death.

This is a very well-researched, informative, and entertaining account. After reading this book about Huey P. Long, I can now see how Hitler managed to take over a Germany while the rest of the world slept. Long accomplished pretty much the same thing in what was supposed to be a democracy. His outrageous, oppressive, illegal activities will make you sick to your stomach after only about 3 hours. Overall, he may have done a lot for the people of Louisiana but his contributions were mainly self-serving and left out a large portion of the state's population - African-Americans, many of whom were free landowning people long before the Civil War. This country allowed him to run ramshod over everyone and everything, both in Louisiana and in the US Senate. His "reign" was more like a dictatorship. All of which makes him a lot like Hitler in the long run. I wondered what took so long for Long to be shot to death - this book really could have been over in about 30 minutes! Not a political assassination - more like justifiable homicide. Richard D. White, Jr. expertly captures the life of man who was out of control. Well worth the price of admission.

Except the ending of course. Corruption, graft, populist angst, and it was utterly amazing how Long did everything opposed to what he was promising his constituents. Well written.

Very interesting and astonishing at the same time.

Truly one of the more colorful characters In American politics - it is incredible how corrupt he was. Great book though.

This is a great account of the life and legacy of Huey Long. I personally burned out of all of Long's tactics in the middle chapters but the middle and then end were great..

I have long had a general idea of the Huey Long story. However, the details of his reign and extent of his power in Louisiana, as ably presented in this book, are illustrative of the indisputable fact that our democracy is vulnerable to corrupt politicians of exceptional audacity, even when they are bent to authoritarian means and methods. It is a lesson we have had to learn over and over, most recently at the highest level of government.

The politic life of Huey Long

This book can simply amount to the political history of Huey Long. You found out pretty much everything he did in terms of politics during his life. Until his successful election (author skips his first election which he did not win) the book was about his life but that is only like forty minutes of the eight hours of the audiobook. Some people might enjoy that but I personally felt that the book was repeating itself with Long firing all his enemies and hiring all his friends and allies, ignoring Louisiana law until his is assassinated.

A charismatic populist rises to political power in depression era Louisiana. He has a peerless gift for phrase turning; "more money than you'd need to burn a wet mule" being just one of his finer moments; chutzpah to burn and a supporting cast of characters who are straight of of Southern Gothic central casting. They drink, brawl, bribe, blackmail, embezzle and shoot each other while Huey Long tries to enact an agenda mixing 50% socialist utopianism and 50% cleptocracy. Huey's an obscure figure here in Britain which makes him even more pleasurable discovery as the subject of a biography. At a time when we are once again seeing the rise of political extremism against a backdrop of economic depression this one's thought provoking as well as hugely entertaining

this is a fascinating review of huey p. longs life and of Louisiana at the time.