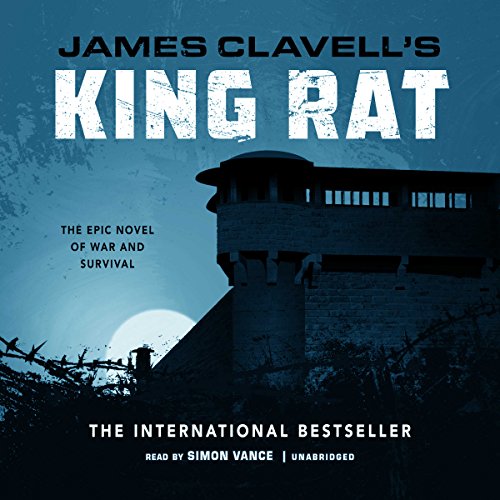 The time is World War II. The place is a brutal prison camp deep in Japanese-occupied territory. Here, within the seething mass of humanity, one man, an American corporal, seeks dominance over both captives and captors alike. His weapons are human courage, unblinking understanding of human weaknesses, and total willingness to exploit every opportunity to enlarge his power and corrupt or destroy anyone who stands in his path.

This enthralling masterpiece about life as a prisoner of war will keep listeners spellbound from the first chapter to the last.

Loved it! Couldn't stop listening until the end. The story is very engaging and the narrator is a great inpersonator. I would recommend it to anyone.

Now this my friends is a book, a story of a lifetime. The heartbreak is real and I suppose I too was a prisoner of the book and just as the prisoners were lost due to freedom so do I feel too. And really got to hand it to Simon Vance on how to tell a story. Marvellous accents and punctuation. Can’t wait to find another book like this but I suppose it would be hard. It’s not called a Classic for nothing.

If you could sum up King Rat in three words, what would they be?

This is about survival, but the strength of the human spirit surviving horrific conditions. The book focuses on relationships rather than gruesome horrors of war. There are comedic moments within the story and no doubt Clavell brought in elements of his own changi experiences during the war.

What other book might you compare King Rat to, and why?

It's pretty unique, it's certainly no Tenko.

I love the aside scenes focussing on the women left behind. The effects of separation and not knowing how your loved ones are or whether they are alive, that was particularly poignant.

This is the first in clavells Asian series if read, as I am doing, in order of publication. A great read.

Not the best in the series, but good enough

Narration was good, story was just alright, no moments that really shocked or amazed but good to read if you're into this kind of storyline. Can't see how it relates to the rest of the Asia saga, it's definitely no Shogun or Gai Jin, but easier to listen to and entertaining enough.

A much leaner book than Clavells's other work, this reads like a matinee war movie with its wonderful cast of characters and capers. There is adventure, humour, and towards the end the book provides subtle reflections on the effects internment has had on the men. Simon Vance provides excellent narration as always.

Enjoyed this much better 2nd time around

I remember reading this 30 odd years ago, and not rating it particularly highly when compared to the other big 3 (Shogun, Tai-Pan, Noble House). However, I really enjoyed listening to this, and although remembering most of the story, found lots of new details. I had completely forgotten about the womens' stories, and they gave an interesting twist to the elements I had recalled. The narration was good - there was a very easy switching between the American, English and Australian accents, and all seemed quite authentic. I would certainly recommend this.

just read it ! a wonderful story of human savagery, endurance and survival, This Audio book rates as one the most astonishing books I have ever read

Overall this book is truly a piece of history. I think at times the exact direction the narrative is headed is uncertain. However in the end this is reflected in the minds of the POWs and their own uncertainty. This book doesn't preach and it isn't overly pessimistic. Just true to life with its ups and downs. I was left with a sense of hope that the human spirit can endure so much, if only we can remember to treat out fellow man with the dignity we would wish upon ourselves. Self preservation is important but don't forget to preserve the good within your own soul.

Not as good as the hype

Firstly, the narrator is fantastic and absolutely makes this audiobook. Well done Sir! The actual story is a bit disjointed and for me personally it made it hard to fully invest in the process of listening. The last third of the book was actually my favourite. Overall I’m glad I persevered but I won’t be recommending this to anyone.

Great book I've read so many times I've lost count. Narration is superb. Anything by James Clavell is worth reading.

Amazing book. James Clavell died to young. Read all his books. What else can be said.