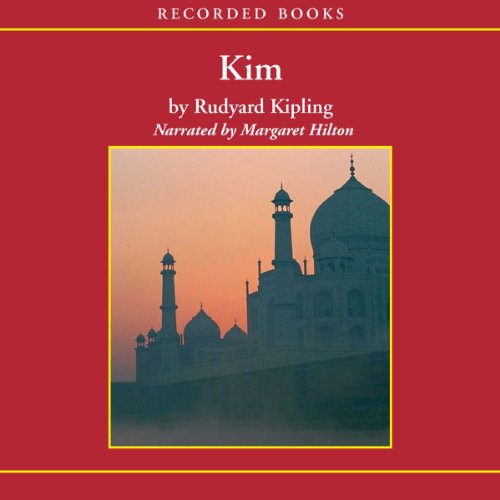 Rudyard Kipling's classic adventure story, Kim, tells the tale of an Irish soldier's orphan son, who roams the back alleys and bazaars of British-ruled India. The young urchin learns the rules and language of the dirty streets, until he discovers his father's old army regiment. Suddenly, Kim abandons his former life and native customs, buys expensive European clothing, and begins a new career as a secret agent. Both an exciting adventure and a detailed look at a spy's inner conflicts, Kim is one of Kipling's most important and popular novels.

This is one of those novels that I read and listened to and instantly regreted not reading earlier when I was a boy. I was able, however, to experience listening to this book with my two kids (one boy 12; one girl 11). It was perfect. I wandered into it expecting a well-written, more or less Empire-centric Colonial novel. It was way more than that. I get the whole Postcolonial Lit thing, but I'm not ready to abandon Kim to this debate or even the Colonial designation. It is so much more. It is an bildungsroman, an adventure story, a wild vibration of the whole of India (North and South, mountains and plains, rich and poor, rivers and roads, believer and unbeliever).

I was a tad worried at first that the specificity of the place and time would throw off my kids , but it was like driving through a country bazar in a foreign country. They didn't understand every sign or shout, but were transported by the smells, the vistas and the atmosphere of Kipling's last great masterpiece.

I liked Margaret Hilton's narration and for most of the novel she absolutely disappeared behind the prose - a task that isn't easy by Kipling's ability to float and bob between native Hind and English languages.

Great book if you can hear it

Kim is a great book, a fabulous story and a classic. I gave this a poor rating because the sound quality is so terrible it is almost impossible to hear even in the quietest of listening spots let alone in the traffic jam where I enjoy most of my audiobooks.

This is a great traditional classic with a wealth of information about a distant culture and context. Filled with information and adventure. But the narration is a big problem. The reader delivers every sentence with a very artificial and insensitive pattern of pauses, emphasis and speeds--as if it were all poetry. Much of the book is dialogue and each character has exactly the same intonation--you can listen to huge chunks and eventually only some feature of the content tells you who is speaking--and the content you need takes a long time to pick up because the sentences are all being broken down into little chunks by the unchanging style of reading. It makes an exciting story intolerably boring by the end.

I had trouble listening to this version of Kim in the car. It's a great story but you should pick one of the higher quality versions.

What disappointed you about Kim?

I know the story, but I couldn't understand this version.

Not understandable. Gave up after an hour.

No. And I love the printed version.

I would and have recommended the book to my friends. This book is written about an orphan boy, but written for adults.

I liked the way that Kipling can put you in among the crowds in rural India in the late 1800's. He brings the sounds and smells right into your mind and lets you feel like you are among the people he is writing about. There is a game Kim was taught that the CIA uses today to teach their agents to see what they are looking at. I am amazed that the story is over a century old and still relevant today. It is a full and rich story that will bring the reader many hours of pleasure, long after the tale is told.

Which character – as performed by Margaret Hilton – was your favorite?

Why Kim of course!

If you could rename Kim, what would you call it?

Kipling wrote the "Jungle Book" and it was made into a children's movie, but once you read it you will know it was written for the adult mind. Kim is a master piece and should be on your "Don't Miss" list. You will love this book and I hope you think of this review after your done reading it.

Before you buy this note that the best file format you can get it in is 2. This was a lesson for me. Unfortunately the poorer quality file formats are not suitable for the way that I listen to audio books which is in the car on an iPod connected to my stereo through the cassette player. It's okay if you want to listen on headphones or a computer, just not for the car, in my opinion.

The story is a great tale; but not the reader

the choice of a woman for the narration here was a poor one.
Go with the newer release the male narration fits the story and characters far better

5 stars for the story but docked 2 for the reading

I have never listened to this audio even though I bought it in 2004 because the quality of the recording was so poor. I was hoping that in the intervening years it might have been rerecorded with in a higher quality format. Alas that has not happened.

Listen to the sample first

I found this to be a very poor recording, even though I always download at the highest available quality. It is somewhat hissy and distorted. I have actually given up listening to it, because it is too much of a struggle to follow. Pity, as it sounds like an excellent tale. I would recommend listening to the sample before purchase.