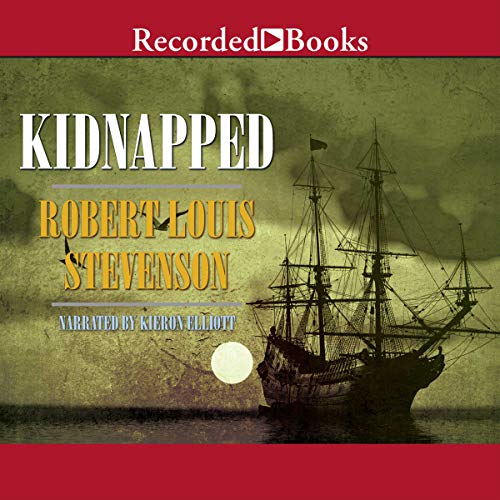 Spirited, romantic, and full of danger, Kidnapped is Robert Louis Stevenson's classic of high adventure. Beloved by generations, it is the saga of David Balfour, a young heir whose greedy uncle connives to do him out of his inherited fortune and plots to have him seized and sold into slavery. But honor, loyalty, and courage are rewarded; the orphan and castaway survives kidnapping and shipwreck, is rescued by a daredevil of a rogue, and makes a thrilling escape to freedom across the wild highlands of Scotland.

Acclaimed by Henry James as Robert Louis Stevenson's best novel, Kidnapped achieves what Stevenson called "the particular crown and triumph of the artist...not simply to convince, but to enchant."

A Boy's Own Adventure

Upon the death of his father, David Balfour is given a letter of introduction to Ebenezer Balfour, of Shaws House in Cramond. The welcome he receives from that man runs hot, and cold in turns. Mr Balfour proposes a visit to a lawyer, having been foiled in an attempt to cause David's death by sending him up a tower without light. The next day a young cabin boy arrives, Ransome, and he guides them to a ship, where David is coaxed on board, before being knocked out, and so the adventures begin.

This is a "boy's own adventure" style story, and it did keep me wondering at how it would be resolved. I liked the mixture of fact with fiction, and the characters were very well drawn. There is a romantic taint to the tale, which, thankfully, refrained from being overly sentimental.

It was a slow start. I struggled to hold on through those first few chapters, but I'm glad I did. The language, being a little old fashioned, took some getting used to - and I am used to the language of Jane Austen, Dickens, and Shakespeare. Eventually I was able to follow the rhythm, if not the Latin.

Mr Kieron Elliott gave an excellent performance as narrator with his Scottish accent. I chose this edition over other audio formats, based on samples of voices, and I'm glad I chose this version. It was a lively narration, clear, even with the Scottish dialect. In fact, the audio production was good overall, with only one or two changes in tone, voice, and quality to mar the presentation.

I would recommend this story to anyone who enjoys a good, rollicking tale. I think pre-teen boy readers might enjoy the tale far more than adults. For my own part, I am going to seek a copy of the sequel, Catriona, hoping Kieron Elliott has recorded it.

I chose this narration because of Kieron Elliott

It was an absolute joy to hear. Mr. Elliott's phrasing, intonation and accent brought this book to life and made it a delightful read. This is the absolute best rendition.

Outstanding narration for this classic story.

Kieran Elliot does a masterful job of narration in this classic story of betrayal and redemption of the young David Balfour. Elliot’s Scots accent is broad but not too broad so as to be unintelligible. His pace is also excellent. A terrific opportunity to listen to and experience post-Jacobite rebellion Scotland. Highly recommended!

This is one of my favorite stories. I love the fact that the performer took the time and effort to do the story with all the accents, as it should be told. The book itself was slow in places, but in the whole, I loved it!

Having just enjoyed my favorite book Treasure Island, I decided to continue with another RLS book I wasn’t familiar with, Kidnapped. I listened to several samples and found this one narrator to be the clearest and most enjoyable to the ear. The story is of course well written, RLS doesn’t disappoint! Worded well, with clever turns of phrase, It carries the listener to another place and time, where a man’s name and honor were of the utmost importance. I smiled more than once at the conversations between the two men, at their pride and their heart. I recommend this performance to any one who enjoys the classics. Now, on to Jekyll and Hyde!

A glimpse into the wild Highlands of 1751!

I wanted to follow along on a map to visualize the real life places of the adventure!

I have never read many of the classics in literature and so in 2017 I am attempting to remedy that. Reading Stevenson's tale made me realize that I have missed out on much. This was an excellent listen. It is at once a picturesque travelogue of Scotland, an informative piece of historical fiction, a rollicking adventure story, a tale of friendship and a very silly comedy. Luckily my brain can multitask.

Young David Balfour just may be the unluckiest lad in all of literature. If something can go wrong for him ... it will. He travels from one mishap to another. I laughed out loud on numerous occasions.

There were moments when the Scottish brogue confused me and I found myself researching Jacobites and looking up language I didn't understand, but it did nothing to harm my enjoyment. I actually found this book highly entertaining. And Kieron Elliott gets much of the credit for that. I could not have read this in my head nearly as well. I am not blessed with the ability to speak or hear accents well. So, having Mr Elliott read it to me in the way it should be read was wonderful. He also put so much inflection into his voice, building tension when appropriate, quieting his voice at the right times and creating a vivid picture in my mind. Superbly done!

I love this book - so glad I bought this. I've listened to this twice thus far. The performance is super - love the accent - well-paced and well-read. The story is superb. Highly recommend!

The narration was first class and such a pleasure. The story is just good clean fun. I couldn't tell you how many times I gasped in surprise or laughed out loud. The protagonist became an immediate literary favourite. You can't help but adore sweet brave Davie.

A wonderful story made even better by the terrific narration by Kieran Elliot!! I read this story as a child but thoroughly enjoyed it again many decades later!

Excellent story, well preformed and will definatly listen to it again! An epic adventure in the heart of Scotland!