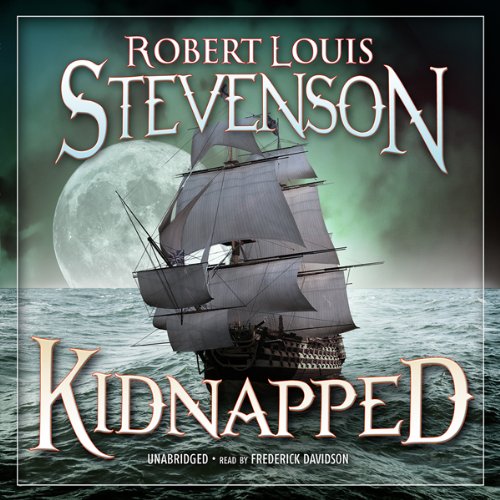 In this spirited and romantic saga, a young heir named David Balfour meets his miserly uncle Ebenezer, who has illegally taken control of the Balfour estate. Ebenezer kidnaps David and plots to have him seized and sold into slavery on a ship to the Carolinas. A couple of days into the voyage, a shipwreck throws David together with David Break, a Scotsman returning from political exile in France, and the two of them journey together. They are witnesses to the murder of Colin Campbell, the "Rio Fox" of Glenure, and suspicion falls on them. What follows is a perilous journey across the Highlands. Kidnapped is a classic of high adventure.
(P)1989 Blackstone Audiobooks

This classic tale is full of interest, suspense and adventure that you will find quite enjoyable. Furthermore, it is read by one of the best dramatic readers who brings the characters to life with perfect accents.

Another Great Historical Novel by Stevenson!

Listening to Kidnapped was a great adventure! While the story itself is not as intoxicating as Treasure Island, it is exciting, fascinating, grueling, moving, suspenseful, and funny. And Alan Breck Stewart, the outlawed Scottish lord on the run with first person narrator young David Balfour, is an even more appealing rogue-mentor-friend than Long John Silver: proud, hot-tempered, quick to take offense, loyal, brave, humorous, strong (when it comes to fighting and fleeing), weak (when it comes to playing cards and blowing the bagpipes), a complex, fully rounded person. It is a pleasure (that finally becomes quite poignant) to accompany the pair as they struggle to escape south over the dangerous, inhospitable heather covered highlands of northern Scotland through numerous patrolling red-coats.

Stevenson depicts the political and historical setting of mid-eighteenth-century Scotland complexly, depicting the rebellious Highlanders with sympathy for their loyalty, honor, and resilience, even as he exposes their pride, grudges, and violence.

Frederick Davidson does an excellent job reading the novel, appropriately making David na??ve and youthful, Alan experienced and mature, and all the other supporting characters just right for their roles and personalities.

The only criticism I could make with this production is to say that it has Davidson somewhat startlingly announce the next chapter number and title without pausing after ending the present chapter, but that is a very minor quibble about what is a great audiobook.

Frederick Davidson's narration of this extraordinary story is so rich. I began listening to the book on my way to Scotland for a 10-day trip, and finished it back home. I wouldn't wanted to have experienced the book without the authenticity of Davidson's voice pronouncing the various Scots words and providing the emphasis precisely. The novel itself captures so much of Scotland's defining stories, the aftermath of the Jacobite Rebellion, the dispersed clans, the passion all Scots had and have for their region, stories and country. RLS's characters are so well drawn, complex and compelling. Highly recommend.

This is a terrific adventure story in classic Stevenson style. Includes really evil people, good people who find themselves in trouble, and the good wins out in the end!

One of my favorites...

I listened this some 5 years ago. I love the story, both in written form, audibly and two of the movies. Its timeless.

I love this Highland adventure!

A drunken murder at sea, a shipwreck, Highland clans (Campbells, McGregors, even Stuarts), some Gaelic speak (with parenthetical definitions voiced), Highland chieftains and real places, hiding in the heather from English dragoons--what an adventure for young David Balfour! It truly is as exciting as Outlander without the sex!

It is after 1745, so English law forbids the wearin' o' the plaid, except that some poor folk make their kilts pass for French culottes with a few stitches separating the legs. The Highland theme alone is reason enough to read this novel, and some details correspond to what we've learned in English history. I love the plot, setting, characters, and narration; however, I wished at the beginning that Frederick Davidson could make his booming voice sound more like that of a timid young lad who has just lost his father and knows little of the world. As our Balfour gets wise and assertive fast, this is not a problem long. But, if your device is connected to a tuner, turn down your volume for Davidson.

Forget the misguided notion that this book is for kids. Drunkenness and gambling are for adults, too. Get the book and the Kindle copy, too, so that you can see the Gaelic spellings and the short spurts of Latin the lawyer tortures us with near the end. I'll listen again.

Oh, gosh, I'm descended from the Lowland Campells--not the good guys in this book.

I have to admit I started reading this book a few years ago, but lost interest before David even set foot on the Covenant. This time, listening to the audiobook while running, I finished the whole book and even ended up really liking it. Where the dialog was incomprehensible at worst and distractingly old fashioned at best (for me at least) in the book, the narrator really helped making the characters seem alive and interesting. English is not my native language, and I've never been to Scotland, so I can't really tell how good or bad the accents were. I personally thought the narrator did a good job with the characters' voices, even if I was surprised at how young he made David sound.

The story is an adventure story about the young David Balfour who finds himself first kidnapped, later in the company of a man named Alan Breck as the two travel through the Scottish highlands trying to hide from the British Army. The simple story of a kidnapping and then a flight from the army is made a lot more interesting by the two main characters personalities and their unlikely friendship. The history behind it all was unknown to me, and I spent a few hours searching the Internet to find out what a Jacobite was, what happened in "forty-five" and what Scotland was like in the middle of the eighteenth century. I enjoyed the book before learning the history behind it too, but would recommend other readers (especially if they know as little about the period as I did) to look things up while they read. A map of Scotland is also recommended, in order to follow this flight across the country.

Oh, and after listening to the book I tried to read it again, successful this time. It turns out there was nothing wrong with mr Stevenson's writing, but something must have been wrong with the young reader... Who is now encouraged to try other books written long ago!

Loved it when I first read it

Kidnapped is Robert Louis Stevenson's best. I loved it when I first read it, and I loved it now. A good listen if you like stories of the sea.

What a gem. Read by a master.

I look forward to anything read by Frederick Davidson. He creates a whole world.

And this line is here to make my review long enough.

Can you roll your

The narrator of this fine tale set in Scotland is particularly proud of his authentic Scottish brogue, so much so that most of the dialogue he reads is absolutely undecipherable to the American ear. I gave up after a few chapters. Unless you are a native of Glasgow or Aberdeen don't frustrate yourself with this book. Pity. R.L. Stevenson deserves better.

I thought this was excellent. Didn't speak a word of Gaelic but hoot hoot I've nae doubt picked up a few reading this. The voices are brilliantly done (though our hero David Balfour can sound a little shrill at times) and the narration is clear and strong, making the quite complicated history easy to follow, though I did have to rewind a few times to get some of the names! My favourite bit was David after a shipwreck stuck on a little outcrop in the stormy sea, it's cold and raining and he has neither shelter nor food and is desperate to get away. I was right there with him!

apparently this is not optional

I really loved this book. there are some small issues with the accents but it disnae dae well tae speak ill ae the deid

Really enjoyed this. It took me back to many enjoyable days in the Highlands and Islands.

I first read kidnapped fifty years ago and still treasure the picture story book. Listening to the audio version I can still picture the scenes from my book. I don't usually by books that last less than ten hours but this was an exception and I am so pleased I bought it.

The whole story is an adventure trip with an historical content

Brought back happy memories of reading this book as a boy of nine.

A rapid romp through the disasters that befall David Balfour, a character who it is very easy to like and engage with. He has just enough courage but fear to seem realistic. I would have preferred a narrator who is actually Scottish - on occasion he became posh home counties, at others Irish. The ending is not 100% satisfactory so you may like to also download Catriona, the follow up to Kidnapped to hear the continuation of David Balfour's life. One down side - a more detailed knowledge of Scottish history from this period would have made the story make more sense! But I muddled through.