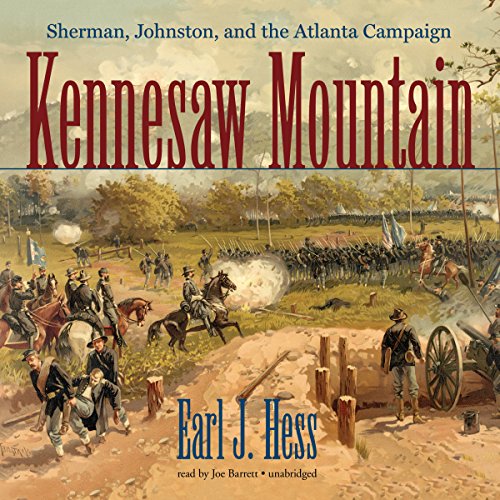 While fighting his way toward Atlanta, William T. Sherman encountered his biggest roadblock at Kennesaw Mountain, where Joseph E. Johnston’s Army of Tennessee held a heavily fortified position. The opposing armies confronted each other from June 19 to July 3, 1864, and Sherman initially tried to outflank the Confederates. His men endured heavy rains, artillery duels, sniping, and a fierce battle at Kolb’s Farm before Sherman decided to attack Johnston’s position directly on June 27.

Kennesaw Mountain tells the story of an important phase of the Atlanta campaign. Historian Earl J. Hess explains how this battle, with its combination of maneuver and combat, severely tried the patience and endurance of the common soldier and why Johnston’s strategy might have been the Confederates’ best chance to halt the federal drive toward Atlanta. He gives special attention to the engagement at Kolb’s Farm on June 22 and Sherman’s assault on June 27. A final section explores the Confederate earthworks preserved within the Kennesaw Mountain National Battlefield Park.

©2013 Earl J. Hess (P)2013 Blackstone Audio, Inc.
"The battle of Kennesaw Mountain is one of the most important as yet unexamined subjects in Civil War military history. Earl Hess’ thoroughness, precision, and clear and insightful analysis assure that this will be the definitive account of the battle." (Steven E. Woodworth, professor of history at Texas Christian University and award-winning author of Civil War history)
"Hess relates in exacting detail a grueling stop along General Sherman’s Atlanta campaign of the Civil War.... The Kennesaw engagement can be seen as a textbook example of the importance of earthworks, and Hess describes the whole scenario in enough detail that it’s easy to see why they were so vital.... Readers will be engrossed by the personal story of these soldiers. Civil War buffs and those interested in military history will take to this gripping account." (Publishers Weekly)
"The 1864 battles around Kennesaw Mountain have long merited greater attention from students of the Civil War. In Kennesaw Mountain: Sherman, Johnston, and the Atlanta Campaign, the amazingly prolific Earl J. Hess offers an authoritative and exhaustively researched account of these operations that will appeal to scholars and general readers alike." (Ethan S. Rafuse, author of McClellan's War: The Failure of Moderation in the Struggle for the Union and Robert E. Lee and the Fall of the Confederacy, 1863-1865)

A very well carried out & detailed explanation of each phase of the battle. A must read for Civil War buff.

A surprising story for me. But relevant. It reveals the life of ordinary soldiers and cavalier attitudes by commanders

I started this book as something to listen to while recovering from an injury. The first and probably least important discovery was that this was the battle that ended my Great Grandfather’s military career. He wasn’t shot. He was one of many who suffered heatstroke.
His commander was Sherman mine was Westmoreland. The similarities in the stories made this a difficult read.
Hess does a masterful job of telling the story of an important battle that is under reported. He looks at the battle from both Federal and Confederate viewpoints. He shows us Generals, junior officers and enlisted men. But it is overwhelming. Both sides had an Army of the Tennessee which played an important role. The list of generals is overwhelming. Two stand out for me. General Geary commanded my Great Grandfather’s unit from July 1861 until the end of the war in 1865. General Thomas comes across as an underrated leader. He opposed the assault on June 27, 1864, preferring the ultimately successful flanking maneuver of July.
Still I agree with Hess. We have to cut Sherman some slack. 20-20 hindsight supports the flanking maneuver over the frontal assault. But it is impossible for modern analysts to see the trade offs the way Sherman would have in a day when his men would have to March, his cavalry rode horses not helicopters and his supplies would be transported in wooden wagons.

excellent book of the battle
well read, really liked the epilog
that had a good description of the field in later years
find a map online so you can follow events