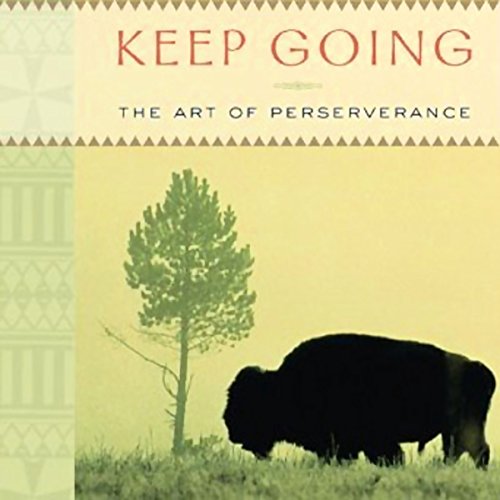 Difficulties are a part of life, but so is the wisdom that helps us overcome them. On Keep Going, Lakota elder and award-winning storyteller Joseph M. Marshall III offers the unique perspective of his people to remind us that the most important and enduring lessons come through the power of perseverance.

In this original author adaptation, Marshall shares with heartwarming understanding and moving insight stories that stretch back across generations through the Lakota oral tradition. Whether you're currently involved in a challenging situation or simply in need of a voice of encouragement, Keep Going will inspire each and every step along the path ahead of you.

I loved reading book. It was so simple and yet so full of wisdom, strength and guidance. I would recommend it for anyone and especially to those who are going through a difficult time.

LISTEN TO GRANDFATHER! THIS IS A TREASURE!

This book is a real upper, despite being very serious. I grew up with people who admired Ronnie and Nancy Reagan, so pretty thinking, denial, sappy pseudo-Christianity. When hard times continued for a decade, I found comfort in Kiana Davenport's "Song of the Exile" -- Native Hawaiian wisdom. I realized I would survive, live, come out the other end. And a favorite African-American minister, Rev. Cecil Williams at Glide Memorial Church in San Francisco, often told us to "keep on keeping-on!" Now I am old, a bit older than Mr. Marshall. I help care for wildlife, to rehab them so they can grow, heal, be released. Endurance is a challenge for me, especially surrounded by much younger volunteers whose energy is seemingly boundless. And yet, it took only patience last night to fill syringes with "squirrel milk" and play Momma Chipmunk to so many babies! I also carried buckets of water to the aviary, which seemed easy because I was happy. The coyote was patient with our attentions; there is hope for her! The bear cub has lost his mom! And yet, he only watched as we put out fruit for his supper. What can he do but trust? No, life is not fair! Everyone wants to live! . . . These were my thoughts after just one listen to this wonderful book! On Monday, Memorial Day, I'd been remembering my Vietnam vet husband's buddy, Jack, whose name is on the memorial wall. The two waved to each other on a hillside, and then Jack was blown up! The other men would not let Wayne do his medic duties toward his friend; they sent him away. My husband never claimed disability because at least he was alive. But he did come back damaged. And he is gone now. No, life is not fair. And there is one passage in this book that will comfort people who have lost a dear one in such terrible circumstances. I think Mr. Marshall was weeping with the thoughts that lay behind the words. . . . Do not expect anything in particular with this listen. Just be still and go with it. I would never listen while driving or making dinner. I put my knitting down. The voice is gentle, just dropping pearls, not putting you to sleep, however! . . . My people are part Cherokee. As a tiny girl I was already saying, "'S'not fair!" and now after learning some history, I am ashamed of my mostly British forebears. The arrogance! How did people bear up under slavery, broken treaties, reservation life, boarding schools, etc. Lately I hear people saying "It is what it is" and "Oh, well!" Mr. Marshall's stories give us a lot more to work with, to not get discouraged, to hang in there and do our best, whatever comes. Thank you, Grandfather!

This book was everything I needed now. Thanks Mr. Marshall for sharing this deep wisdom.

What did you love best about Keep Going?

Everything, from the voice of the author to the stories that held such meaning contained within.

Have you listened to any of Joseph M. Marshall III’s other performances before? How does this one compare?

Not yet, but would love to hear more!

What did you learn from Keep Going that you would use in your daily life?

It seems so simple a concept, but we would have no way of knowing the

Powerful stories and timeless lessons on life. Loved it!

I was on a webinar recently with Joseph Marshall III. He is a true gift. During the session someone in the session mentioned his book. The book resonated with me deeply. 1. I tell stories to help with the work I do. It allows the content to land. 2. On May 4th my father passed as a result of complications related to COVID 19. The timing of this gift could not have been better.

Be well, All
Bart

One of the few authors who is also a great narrator! This book inspires.

I'm sure that I'll be sharing these stories soon. Timeless wisdom speaks to all cultures.

Need to get back your roots

Listen to this book!

Reassuring to hear the knowledge being read & yo know it knowledge is true. Thank you

Gem of A Book

I didn’t know what to expect from this book, but it’s a beautiful and inspiring read. I will be listening again. Anyone feeling a little down or anxious about life (especially creatives), will find that this little book is a goldmine.