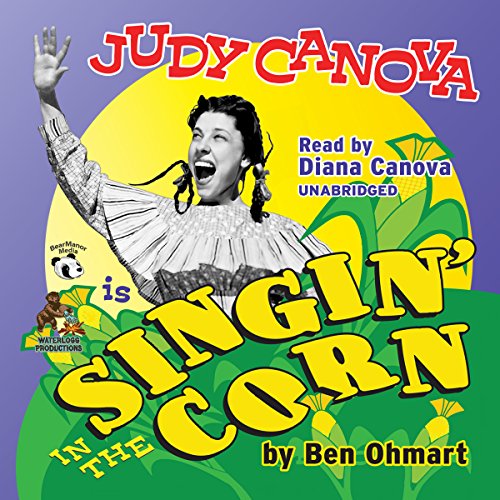 Diana Canova delightfully reads Singin' in the Corn!, the biography of her mother, Judy Canova.

Judy Canova was a popular American comedienne, actress, singer, and radio personality who appeared on Broadway and in films. The popularity of the Canova family led to numerous performances on radio in the 1930s, and they made their Broadway debut in the revue Calling All Stars.

During her career, Judy recorded for the RCA Victor label and appeared in more than two dozen Hollywood films, including Scatterbrain (1940), Joan of Ozark (1942), and Lay That Rifle Down (1955). In 1943 she began her own radio program, The Judy Canova Show, which ran for 12 years. Teeming with family interviews and Canova's own writing, Singin' in the Corn! is the only book that will ever need to be written about "everyone's favorite rube".

More about movie plots than her life

I'm going to keep this short. I LOVE Judy Canova. SHe is one of my all-time favorite radio stars, but this book is a little flat. The narrator does a good job, but does not add much beyond just reading the story of Judy's life. They do play a few bits from her radio program which was nice, and I wonder how that flew in the actual book. Transcripts maybe?

What really bogs this biography down is the way it bounces around. Plus, it starts of talking about her family's origins; grandparents and such. The biggest issue I had was that it went into excruciating detail on every movie she was in, providing a complete plot from start to finish, naming every actor, and piece of music. It was more of an IMDB style biography of her work rather than herself. The few scant pieces of her actual life that came through were just scraps in a heap. By that, I mean it would say that she was made a sheriff in Texas, but not the circumstances that brought it about, how she felt about it, or how her life was changed. For example, the way the book makes it out, it almost seems as if becoming famous was extremely easy. There were no hard times detailed, no real struggles, etc. She just went there and became huge hit. Granted, that might be the way it happened (I doubt it) but there is absolutely 0 interest in hearing someone say I began life ugly, blossomed, and became a star; which is how the biographer pretty much summed up her life. There were a lot of things that could have been expanded such as her realization of how TV was going to surpass radio, and her attempt to keep the format competitive. But nothing.

What could have been an amazing trip into the life of an amazing woman turned into a list of credits and accomplishments. Yes, a relative of hers narrates , but that cannot emeliorate the issues this book has.


If this review helped, please press YES. Thank you immensely!!!