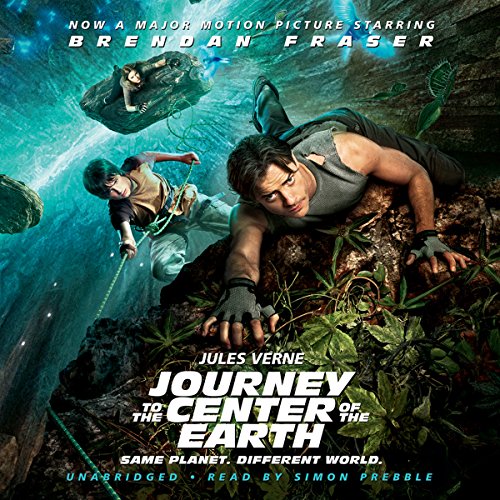 Geologist Otto Lidenbrock is perusing an ancient Icelandic manuscript when he discovers a mysterious encrypted note. The message reveals the account of a sixteenth-century explorer who claims to have found a passageway to the center of the earth.

In his quest to penetrate the planet's primordial secrets, the impetuous professor, together with his quaking nephew, Axel, and their devoted guide, Hans, sets off immediately for Iceland. Descending through the belly of a volcano into the bowels of the earth, they discover an astonishing subterranean world of prehistoric proportions.

A classic of science fiction that helped give birth to the genre, this imaginative speculation on the earth's nature is both a rousing adventure story and an apt portrait of the psychology of the questing scientist.

This is an excellent reading of Verne's novel, maybe a shade less effective than Tim Curry's performance, but only a shade. Audible has had some trouble getting the recording straightened out. At the time of this writing, the audiobook is being credited to Simon Vance. It's actually read by Simon Prebble: both excellent narrators, but very different in style. For a long time, the preview was a selection from Prebble's version but the version that downloaded was by Frederick Davidson. Now the preview and download are right - both are Prebble - but the credits are wrong. In any case, Prebble reads this outstanding adventure with his usual charm and spirit.

Would you consider the audio edition of Journey to the Center of the Earth to be better than the print version?

Very much so. While I do not wish to judge the story as it is a classic and has some very good parts to it, I find that the story tends to drag in places and focus on the science and geology of the setting, not on the more fantastic nature of the story.While I understand that this is a style of writing some enjoy, I cannot but feel that it makes the story feel longer and dwells on things that most readers wouldn't care for. However, the reading itself by Simon Prebble is first rate and really carries the story.

I found the ending to be a bit abrupt, we were at one place then suddenly were in another and everything worked out.

Which character – as performed by Simon Prebble – was your favorite?

Since this was told in the first person, this is a bit harder to decide. I will say that each of the characters was distinct and well defined, you wouldn't mix them up.

The narration of Simon Prebble was very good. The story itself is slow at times, but I can't give less than five stars overall for this narration.

There was some mention by others that there was an error in which recording was being offered, however as of this review this has been rectified.

I had previously purchased the Tim Curry reading of the same book and found it immensely dull. The pronunciation was careful and measured, but rather slow and didn't seem to have much excitement. I found that there were odd pauses in his speech and it threw me.

I have always loved Journey to the Center of the Earth. Even though I understand as an adult that the center of the earth is a rotating core of molten metal, Verne's novel still captures my imagination.

Be aware though that Audible is offering Blackstone Audiobooks's edition of Journal to the Center of the Earth with Simon Prebble as the narrator. In fact, the preview audio is indeed Prebble's narration. However, when I purchased and downloaded the audiobook, to my great surprise, I discovered that it is a version narrated by Frederick Davidson. I have nothing personal again Davidson, but I find his narration style to be supercilious and effeminate.

I've contacted Audible support twice about this mix up, but no quick solution appears forthcoming.

Unfortunately, Audible does not always give its older audiobook editions close scrutiny when it comes to accuracy and quality. For this reason, I have rated an audiobook that deserves 4 stars as 1 star.

What did you love best about Journey to the Center of the Earth?

The story was pretty engrosing; however, I do feel that it ends rather abruptly.

What does Simon Prebble bring to the story that you wouldn’t experience if you just read the book?

This book is fantastic, plain and simple. Jules Verne’s characters are all very well written and the story is wonderful and exciting. With that said, the real star of the book is Simon Prebble. His narrations are sublime, and I have no doubts that I could listen to him describe paint drying with great enthusiasm.

Great story but dragged down by the POV

At some point near the end of the story, the Uncle says “What are you in a fright about now?” His “nephew” is such a whiny ass bitch. It is too bad that Mr. Verne didn’t coin that phrase when he wrote the story.

So well narrated ! Better than modern movie versions Not sure I ever read the original as a child, so it was all new again

A classic that takes you alongside three companions to the very bowles of the earth and beyond.

Good... if you can stand the accent

I love Jules Verne. A few weeks ago, I had just finished listening to 20,000 leagues under the see read by Harlan Ellison. Mr. Ellison made the experience of listening to this well known classic fresh and immediate. I was therefore anxious to listen to this other Verne classic, Journey to the center of the earth.

Though I was positively disposed to the material and the style of the author, I found the narration unbearable between the extremely well done dialog accents.

The narrator affects a pompous, arrogant English accent that puts me off. He did not sound at all excited about the material. Indeed, the reading was rather perfunctory. Try as I might to adapt to the accent, hoping that it would become 'invisible' with enough habituation, I am still in pain as I listen even after several hours.

My image of an excited young nephew going on an an adventure of a lifetime is not met in this work. Instead, the narrator sounds like a middle aged man giving an account of his latest polo match over afternoon tea.

an excellent fantasy story clad in as much "fact" as to ease the reader into the impossible world that Verne describes with great sensitivity.

What made the experience of listening to Journey to the Centre of the Earth the most enjoyable?

It's an excellent classic that doesn't need the mugshot of Brendan Fraser to sell it as I guess the movie version has far more added to it. It is simply a journey of adventure without the hype or constant technicolour explosions.

What was one of the most memorable moments of Journey to the Centre of the Earth?

The first encounter with life below the earth

Not one of your best, hard going and the narration made it hard work

if you can help me download it that would be great. thanks for you help

Why did this go missing for so long?!, 1 star all round for that.

For those wondering, this is a five star product!

Annoyed I was unable to listen to this for over two months! And not even an update that it was back!

Guerning to the centre of the earth!

Good old romp in true Jules Verne style. Beware Fredrick Davidson, who narrates. He is a some what acquired taste and his camp, arrogant drawl will set some people's teeth on edge. Recommend the story but avoid this narrator!