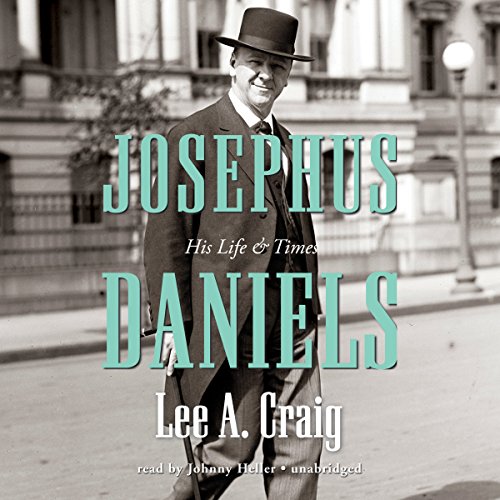 As a longtime leader of the Democratic Party and key member of Woodrow Wilson’s cabinet, Josephus Daniels was one of the most influential progressive politicians in the country, and as secretary of the navy during the First World War, he became one of the most important men in the world. Before that, Daniels revolutionized the newspaper industry in the South, forever changing the relationship between politics and the news media. Lee Craig, an expert on economic history, delves into Daniels’ extensive archive to inform this nuanced and eminently readable biography, following Daniels’ rise to power in North Carolina and chronicling his influence on 20th-century politics.

A man of great contradictions, Daniels - an ardent prohibitionist, free trader, and free silverite - made a fortune in private industry yet served as a persistent critic of unregulated capitalism. He championed progressive causes like the graded public school movement and antitrust laws even as he led North Carolina’s white supremacy movement. Craig pulls no punches in his definitive biography of this political powerhouse.

©2013 the University of North Carolina Press (P)2013 Blackstone Audio, Inc.
Giornalisti, redattori ed editori Politici Stato e locale
Mostra di più Mostra meno
“For scholars as well as for citizens with serious interest in history and journalism, Professor Craig’s biography of Josephus Daniels opens windows of insight into key moments in American history: the rise of the white supremacist ‘redeemers’ in the post-Reconstruction South, the presidencies of Grover Cleveland and Woodrow Wilson, and the conduct and outcome of World War I. The book also tells the story of a fascinating, ambitious newspaper editor in politics.”—Ferrel Guillory, University of North Carolina at Chapel Hill
“Recent political events have rekindled interest in the formative years of progressivism, in which Josephus Daniels played a large role—before, during, and after his close relationship with Woodrow Wilson. Professor Craig’s briskly written biography rescues from undeserved obscurity a Southern and national politician of great consequence and fascinating contradictions.”—George F. Will