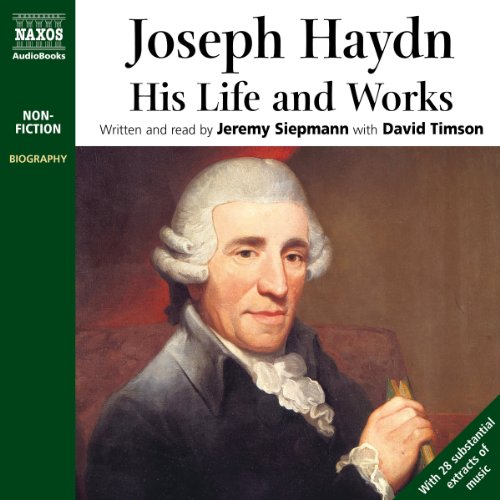 Symphonies, quartets, concertos and keyboard works poured from the pen of Joseph Haydn, making him one of the most important figures in classical music. Jeremy Siepmann tells the story of the man and his work in this lively autobiography, enhanced by numerous examples of the music itself, taken from the Naxos catalogue. There is no better programme with which to mark the 200th anniversary of the composer's death.
©2009 Naxos Audiobooks (P)2009 Naxos Audiobooks

I have a graduate music degree and already knew quite a bit about Haydn's music before listening to this book. But I still found the narrative completely engaging, and thought the audio quality was excellent. It brought back fond memories of watching the orchestra players blow out their candles and walk off stage one by one during Haydn's "Farewell" symphony.

This is one of the best use of audiobooks. Loved it! Great narrations with plenty of Hyden's correspondences, which helped a great deal in conveying Hyden's personalities and circumstances. Very nice music samplings. Good way to learn about the composer and his works for a amateur like me. Loved the narrator's voice too. Very appropriate interpretation. It's refreshing!

An excellent blend of biography and music. The story is interesting by itself. By adding one of Haydn's musical pieces at 10 to 15 minute intervals the author really makes Haydn's life come alive.

Jeremy Siepmann has done a very good job introducing classical composers to a general audience. He strikes a fine balance of telling the story in an fluid way and yet still get into details. It is especially nice that Siepmann has included music excerpts of a considerable length that really allow the listener to get a good feeling of the composers development and style.