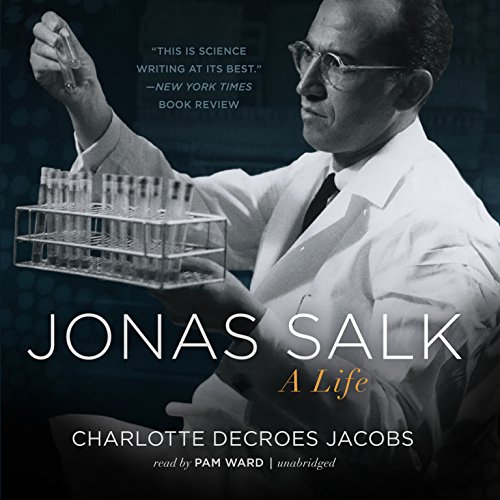 The authoritative account of one of the 20th century's most important - and controversial - scientists.

When a waiting world learned on April 12, 1955, that Jonas Salk had successfully created a vaccine to prevent poliomyelitis, he became a hero overnight. Born in a New York tenement, humble in manner, Salk had all the makings of a 20th-century icon - a knight in a white coat. In the wake of his achievement, he received a staggering number of awards and honors; for years his name ranked with Gandhi and Churchill on lists of the most revered people. And yet the one group whose adulation he craved - the scientific community - remained ominously silent. "The worst tragedy that could have befallen me was my success," Salk later said. "I knew right away that I was through - cast out."

In the first complete biography of Jonas Salk, Charlotte DeCroes Jacobs unravels Salk's story to reveal an unconventional scientist and a misunderstood and vulnerable man. Despite his incredible success in developing the polio vaccine, Salk was ostracized by his fellow scientists, who accused him of failing to give proper credit to other researchers and scorned his taste for media attention. Even before success catapulted him into the limelight, Salk was an inscrutable man disliked by many of his peers. Driven by an intense desire to aid mankind, he was initially oblivious and eventually resigned to the personal cost - as well as the costs suffered by his family and friends. And yet Salk remained, in the eyes of the public, an adored hero.

Based on hundreds of personal interviews and unprecedented access to Salk's sealed archives, Jacobs' biography offers the most complete picture of this figure. Salk's story has never been fully told; until now, his role in preventing polio has overshadowed his part in codeveloping the first influenza vaccine, his effort to meld the sciences and humanities in the magnificent Salk Institute, and his pioneering work on AIDS.

This is the first full account of Jonas Salk’s (1914-1995) life ever published. The author is Charlotte Jacobs, M.D. a professor of medicine (Emeritus) at Sanford University. Later in life she studied biography writing; this is her second biography she has published. I recently read “American Biography,” by Carl Rollyson so I paid closer attention to the details required to make a great biography while reading this book. I felt Jacobs followed the requirements when she researched and wrote the book on Salk. This is an excellent biography of Jonas Salk the man.

The book is well written, the writing style is engaging and informative. The writing did not appear to be heavily academic. Jacobs wrote a sympathetic narrative but did reveal the strengths and weakness of Jonas Salk from his extreme shyness to his idealism. Dr. Jacobs had unprecedented access to Salk’s sealed archives and she conducted hundreds of personal interviews. The research appeared to be meticulous. The author does a good job revealing how the scientific community treated Salk and also how Salk was affected by anti-Semitism early in his life. Salk attended New York University School of Medicine at it did not discriminate against Jews as all the Ivy League school did. Salk’s parents were Jewish immigrants from Poland.

On 12 April 2015 marked the sixtieth anniversary of the announcement that Jonas Salk’s vaccine could prevent poliomyelitis. I remember the excitement of polio being conquered; I also remember lining up at school to get the vaccine. Salk was a professor of medicine at University of Pittsburgh School of Medicine and later developed the Salk Institute. Salk did not patent the Polio vaccine and received no monies from it. Besides his work on polio Salk did pioneering work on multiple sclerosis and AIDS; he was also the co-developer of the first influenza vaccine with Thomas Francis M.D. The Salk vaccine is still used today along with the Sabin vaccine, together they are more effective against polio.

I was amazed to discover that Jonas Salk did not receive the Nobel Prize in Medicine for discovering the vaccine for Polio. I remember my mother’s fear every summer and all the precautions she took to keep my sister and I safe from polio. The discovery was truly one of the greatness in the 20th century. Pam Ward did a good job narrating the biography. This is a fairly long book at about 20 hours. I am looking forward to reading more books by Charlotte Jacobs.

surprising at every turn

I had a preconceived notion of who Dr Salk was but this book has thoroughly filled in the blanks and I may even have to go through it again to complete the picture. well done.