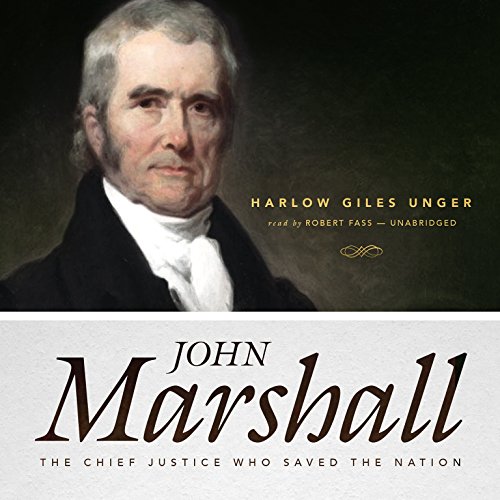 A soul-stirring biography of John Marshall, the young Republic's great chief justice who led the Supreme Court to power and brought law and order to the nation.

In the political turmoil that convulsed America after George Washington's death, the surviving Founding Fathers went mad - literally pummeling each other in Congress and challenging one another to deadly duels in their quest for power. Out of the political intrigue, one man emerged to restore calm and dignity to the government: John Marshall. The longest-serving chief justice in American history, Marshall transformed the Supreme Court from an irrelevant appeals court into the powerful and controversial branch of government that Americans today either revere or despise.

Drawing on rare documents, Harlow Giles Unger shows how, with nine key decisions, Marshall rewrote the Constitution, reshaped government, and prevented Thomas Jefferson from turning tyrant. John Adamscalled his appointment of Marshall to chief justice his greatest gift to the nation and "the pride of my life".

Riveting , and fast moving account of history, that one is not able to set down book until finished reading it.

the life and times of John Marshall

the book was good but it's more a book of the life and time of John Marshall. less than half the book talks about his time on the supreme court. very little of which is focused on the major cases he heard. rather the book is mostly about the founding of America and her earlier wars. while Marshall was a part of this he was not directly involved in much of what happens in the book. if your interested in his time on the bench this isn't the book for you.

A few years ago I visited John Marshall’s home in Richmond Va. I must admit I knew very little about his importance in American History and his relationship to the founding fathers. The Union was in danger of splitting from the outset and John Marshall helped keep it together. I loved this book.

A decent bio burdened with overwrought language and lackluater analysis.

Unger's 2014 bio of John Marshall does an admirable job of humanizing a figure most Americans know only for his aloof position as the longest serving Chief Justice of the Supreme Court and the opinions attributed him and the Court. Unger doestn ignore this (how could he?) but devotes a substsntial amount of his time to Marshall's time as a Revolutionary War Soldier, prominent Virginia politician, and father/husband.

While the book excels there, it falters in describing the political world Marshall was a part of. It's no secret that the early years of the America were filled with "heated" rhetoric. You couldn't turn your head without somebody accusing somebody else of being a monarchies, francophile, or doing something that would lead to dissolution of the union and civil war.

While that rhetoric was and has always been a part of the fabric of American political discourse, Unger seems to rely solely on the most heated excerpts from speeches/letters at every turn.

The effect of this is Unger describing darn near everything as a potential or actual "coup d'etat" - the phrase appears SEVERAL times. While Unger seems to mean this as various branches of govt and individuals asserting powers not clearly granted them under the Constitution (a very interesting topic by itself as the nation struggled with itself as to what this new controlling document meant), he never really analyzes it from that perspective.

Instead, it's selective overheated quotations that only the calm and measured Marshall can navigate and prevent conflict/civil war. This is the other major fault with Unger's work, he has a strong tendency to become far too enamored with his subject and drift into hagiography.

Overall, the heated rhetoric without adequate analysis makes for some fun reading but keeps this bio from becoming more than an enjoyable pulp diversion.

I don't know how of the history expressed is accurate or not, but the language and tone of the book seen less scholarly than someone like McCullough. As a result, I'm questioning the veracity of the story in a way I've not done for over 200 other audio books.

I loved this book. I didn't know a lot about John Marshall before I began to listen to this book, but I grew in my appreciation for his Solomon-like wisdom and the contribution he made to the formation of our country. I especially enjoyed the background to the early events of our country's history and the details of relationships between the founding fathers that I didn't know before. This was a truly enjoyable story that everyone should hear. This is the second book I've read by Harlow Unger, but it certainly won't be the last!

Very interesting look at an incredible American. Pretty amazing the impact just one man can have. Not a very flattering look at Thomas Jefferson though.

H.G Unger has given John Marshall the light he so well deserves. Marshall was a devoted husband and father, a lawyer, a Revolutionary War hero, a diplomat and among the founders of the country. AND THAT was only during the first half of his life. That last 35 years was spent inventing how the Supreme Court should and would function in a democracy with three equal branches of government.

Few know how disruptive and contrary Thomas Jefferson was toward the federal judiciary. He did all he could (mostly duplicitously) to marginalize it and even eliminate it. Imagine. Had it not been for Marshall, Jefferson may have succeeded.

This book is the story of John Marshall, who he was and how he became such a force in American history. It's well written with excellent details, lots of characters and some thrilling exposés. The performance is excellent. For the American history buff, a must..

I like Unger's books, but this book was a bit of a disappointment. It took 7 chapters to even hear much of a mention of Marshall at all and then the story continues with most of the references to Marshall being happenstance. He was just there when important things happened.

If you have read other works on the founding fathers by the author, this one will have a familiar ring, repeating many of the same stories as in the others. Doesn't make this an interesting read, just not as original as others.

Good book about a great figure

This is a very well written book, it is able to tell the story of a great and relevant historical figure of US along with the backstory of his time. For me the book has extra value because I knew little about John Marshal and his outstanding contributions. In addiction, it was good to know more about other Important figures, for good and bad, such as Hamilton, Moore and Jefferson.