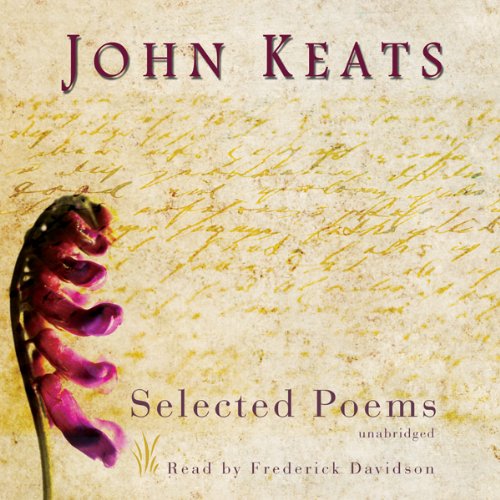 One of the most distinctive periods in English poetry was the age of Romanticism, a movement which rebelled against the neoclassical forms and celebrated the imagination as a spiritual force. John Keats was a prominent shaper of this new movement, and as such, he was not without his critics. "I think I shall be among the English poets after my death," he soberly prophesied. Indeed, in 1821 Keats suffered an early tragic death from tuberculosis at the age of 25, but today is recognized as the archetypal Romantic genius who explored the limits of the imagination and celebrated the pleasures of the senses.

Unlike Shelley, Keats was not a political poet; his prime passion was for art. His muse was the goddess of beauty and truth, and his worship of her found its finest expression in his immortal odes, which stand unique in literature, unexcelled in perfection.

I was a little disappointed with the narration of Keat's works.
The way it was read it wasn't always apparent when one piece of work stopped and a new one started.
My biggest complaint of the style in which the prose is read is that Frederick Davidson sounds entirely too lackadaisical. I am half picturing the narrator picking his nails in disinterest while reading.
Maybe this is a personal preference of mine but I find that poetic prose is easier on the ears when read by a softer voice capable of clear enunciation. I love Keats but I just can't get into this narration.

Keats is one of the greatest English poets and here is very well read. The title Selected Poems is a bit misleading, however, as the text consists of a handful of poems and the full text of his unfinished work Hyperion. Many many great Keats poems are missing. Still, a good book for a great price.

This is the worst recitation of great poetry that I have ever heard. An effete flowery mannered pompous parody that was excruciating to listen to

The advantage of this recording is that it includes a lot poems not usually found in audio. The reader opts for a casual tone which seems to disappoint some people; the rendering ON FIRST LOOKING INTO CHAPMAN'S HOMER is almost startling at first but when you realize the conditions of the poem's composition it makes sense and it's refreshing to have another take on this oft recorded poem. The real gem though is THE FALL OF HYPERION: A DREAM; the reader brings out all the power and passion of the poem without resorting to any histrionics or flourishes. Once again though AUDIBLE lets us down by not including a list of poems or an easy way to locate poems in the book.