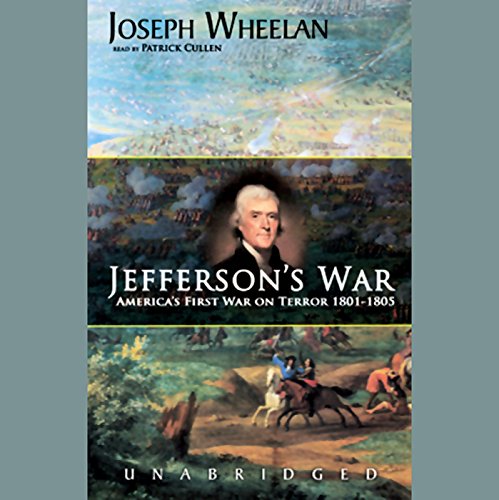 Two centuries ago, without congressional or public debate, a president who is thought of today as peaceable, Thomas Jefferson, launched America's first war on foreign soil, a war against terror. The enemy was Muslim; the war was waged unconventionally, with commandos, native troops, and encrypted intelligence, and launched from foreign bases.

For nearly 200 years, the Barbary pirates had haunted the Mediterranean, enslaving tens of thousands of Europeans and extorting millions of dollars from their countries in a mercenary holy war against Christendom. Sailing in sleek corsairs built for speed and plunder, the Barbary pirates attacked European and American merchant shipping with impunity, triumphing as much by terror as force of arms.

The author traces the events leading to Jefferson's belief that peace with the Barbary States and respect from Europe could be achieved only through the "medium of war".

Jefferson, long thought of, as a "pacifistic" president declared America's first war on foreign soil in response to "Islamic Jihad".

European nations had given in to buying off "peace" with the Barbary Coast states. Many of their citizens being subjugated to slavery and all of the attendant horrors. The Barbary Coast states (North African
states of Morocco, Tripolitania, Tunisia,Algeria) declared Islamic Jihad on America because Jefferson refused to pay the extortion fee.

This is an interesting bit of American/World History.The correlation with today's current events will not be missed by the listener. The narrator is excellent.

Should be required reading/listening

"Jefferson's War" is concise reading of a story that more people need to know.

I am thrilled Audible offers it. The story talks about how Jefferson and his predecessors, and others in the Administrations, dealt with the Barbery pirates. Along the way, we learn the early history of The United States Marines, the namesake of Decatur, IL, the link between the battles and the National Anthem, and why the eagle in The Great Seal of the United States of America does need to hold both arrows and the olive branch.

I encourage all to give this a listen.

It's worth the money

History, to many, is dull and dry, but not this reading. It takes a look at an often forgotten part of American History and brings it to life. The parallels to todays world are often uncanny. A great deal of background material is presented to flesh out the characters and their historical importance. After listening to the book I was left with that distinct feeling that our technology has changed in the last 200 years, however, as a nation, the actions and intents of elected officials has not.

A superbly well organized story of a complex time in our early country. This is timely & well done to relate current events to the similar stresses in barbary for all of our country's history.

A logical extension of "Empires of the Sea".

Pirates and slavery were a historical problem in the Mediterranean for centuries prior to Jefferson's birth. Roger Crowley chronicled this in his book "Empires of the Sea". This plague on the people of the Mediterranean, and the World, was ended by Jefferson's Barbary War's. The ingenuity, courage, and daring of the American troops and their leaders changed the the path of history and secured support of the major European to end this blight.

The writing was interesting and the reading was good and at times powerful. This a book that should be read to gain a viewpoint of the attitude of many of the leaders and people Muslim world toward the "unbelievers" or infidels. A problem that we, or children and future generations will have to deal with.

I liked this book alot
it shows how the united states evolved from fledgling nation to powerfull nation.
the evolution of jefferson is great, after years of arguing against centralized government, he takes that power and creates a powerfull navy, in order to protect the fledgling american commerce.

after this book I took the plunge and picked up the 5part Alexander Hamilton monster of a book.

A war story with heroes and fools and great achievements and blunders. Reminds one of the present struggle against Islamic fanatics.

In those early days we were challenged by a pirate nation and could have chosen to pay ransom but instead decided to fight for honor.

I find myself in between the other 4 reviewers. This is a very interesting story about a period of history I knew little about. But I did find that it droned on a bit - especially in the first half.
The parts of the story having to do with the ship Philadelphia and the taking of Tripoli were quite good. And the last chapter goes well beyond the Barbary war.

I would if they were interested in the subject. I would not if they just liked history as this book was very dry and fact filled.

If you’ve listened to books by Joseph Wheelan before, how does this one compare?

This was the first book I have ever read by him. I won't go out of my way to read his books but if the subject interests me, I will check it out.

Could you see Jefferson's War being made into a movie or a TV series? Who should the stars be?

I could, but I would hope it would be more exciting than the book. Decatur played by Jake Gyllenhaal, Eaton by Dwayne Johnson. The Bashaw of Tripoli by Vin Diesel. Too many others to go on.

The most exciting part of the book was Eaton's journey across the desert into Tripoli so that the Americans could fight from land and sea. America had it's own Lawrence of Arabia.

I came to a different conclusion than the author on Jefferson's War. When Jefferson was President the war ended with the USA still paying "tribute" to the Beshaw. So why did we fight if the outcome was the same?
After the War of 1812, the US finally had a Navy and Marine Corps that was ready to take on the Barbary Coast. When they fought in Madison's term the US told the Muslims they would no longer pay tribute to them. That was a win!
This is the war that the Marine's Hymn states "By the Shores of Tripoli".

Where does Jefferson's War rank among all the audiobooks you’ve listened to so far?

We have been a world power long before the advent of the modern era.

Which character – as performed by Patrick Cullen – was your favorite?