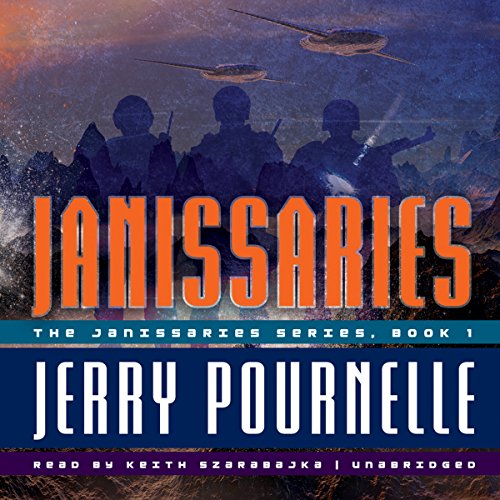 Some days it just doesn’t pay to be a soldier.

Captain Rick Galloway and his men had been talked into volunteering for a dangerous mission, only to be ruthlessly abandoned when faceless CIA higher-ups pulled the plug on the operation. They were cut off in hostile territory, with local troops and their Cuban “advisors” rapidly closing in—and then the alien spaceship landed.

Rescued from certain death, they now must fight another world’s war.

Well, this was for me an easy-to-listen-to, entertaining story, with a reader who did a proper job without causing any irritations. The story is straightforward: mercenaries are sort of abducted/hired from earth to do a job for aliens. Main part of the story then plays on a planet (at the time of the story not too different from earth) with a society at the development stage of the early Roman empire. There is bit on the military side of things, there is romance+castles, horses+battles, there is some looming dark galactic background story.

What I really liked about all of this, was that it was what I was looking for: an easy going entertaining reasonably quick read/listen with a potential series continuation. There was no great depth to the story, there was no repetitious dwelling in people's motivations or thoughts, no endless descriptions of non relevant details, neither the romance nor military nor any other specific aspect was over-emphasized.

So if you like something light and fluffy for in-between & if you don't worry too much about plausibility just give it a try.

If you could sum up Janissaries in three words, what would they be?

Thanks much to Jerry and his Janissaries series. It has been a favorite of mine for decades. I was stunned to see it available on Audible, as Jerry was normally a 'non ebook' hold out. Very few of his works went to ebook format and abook format. So I snapped it up immediately when I saw it available on Audible. Keith Szarabajka's could NOT be topped. He rules in his presentation and reading. Not just a reader, he emotes (I mean that in a good way!) the characters in the book with great skill. I hope Keith will be able to keep on this series, along with the mysterious 4th sequel Mamelukes (Janissaries IV: Mamelukes (work in progress for fifteen years as of 2012).

Reluctant Captain Rick Galloway reminds me of our founding father George Washington. Recognizing the truth in developing a society with a know world shattering threat building at the border.

Looking forward to a new entry

Mamelukes, the fourth book in the Janissaries series will be released in June 2020, now that Jerry Pournelle's son has put the final touches to it. That prompted me to go back to the beginning of the story and I was pleased to hear it hold up to the memories of reading it when it was just off the presses. There are certainly echoes of Pournelle's writing mentor H. Beam Piper in the tale, but he's found an interesting new take on the story and his main characters are not replicas of Piper's but quite full-blown folks I enjoyed getting to know. The underlying Janissary story is a very interesting one, and I'm looking forward to revisiting the whole saga and to finally find out where Pournelle intended to go next. Hopefully, Audible will pick up the new title as it comes out. I'd enjoy hearing Szarabajka reading it, too.

This genre but especially its sub genre

Sci-Fi has become divided into a dozen categories and more. This is a variation of "lost" and washed up on a "deserted island". Whether one or more individuals, they set out to explore, learn, build and survive and then build a small but viable society. This is different in that they don't wash up on the planet, but are dropped off by a species?, to fend for themselves although there are Homo Sapiens already present. The story is simple and relatively believable. Could you survive, build up the essentials, and continue on as most likely is begun in book 2. It satisfies the desire of many of us to see if we "have it".
If you require an easy read that is not 100+ hours to complete, then this will fit your requirements. I especially enjoy non fiction, but not if it could have been written in <20% of the size with it meeting my criteria that many times less is more. I would recommend the first book and I will go on and queue up the 2nd book for an in between listen.
In either case, I would recommend the book as an enjoyable listen, not in the same category as the "Lucky Jack" series by Jack Campbell, but still well worth the credit and then some.

Jerry Pournelle struck me when I first encountered his SF writings in the 70s as an author with ideas who didn’t quite know how to flesh them out. Jannissaries is a good example of this. I had hoped the listening, rather than reading, would give the narrative some extra quality that the printed word couldn’t … but it didn’t.

As well as being a bit lite, the story doesn’t compare well with others in weathering the tides of time; “A Canticle for Leibowitz” (also read by Tom Weiner) for example. I realize there are many Pournelle acolytes, but I always thought more is read into his works than is there.

For me Pournelle’s writing has always seemed a bit padded and this story is no exception. It’s a shame as the premise has potential and could have been fleshed out to be a much more entertaining, and interesting SF outing. This book is actually the first of the Janissaries series … and I think it shows. Its good point is that it is complete in itself … the bad point, “who cares?”

Not withstanding all the above … if you wish a lite listen where nothing intellectually demanding is required, this will pass the time sufficiently well

Not bad, just not me

I found the storyline in Janissaries to be a bit confusing. The janissary of the title is not the main character (a janissary is a child raised by a conqueror to be a soldier against his own people) and is not really a janissary anyway since he's not a soldier. I think Pournelle probably just thought it was a cool word. Anyway, while the plotline holds together it was just a little to convoluted unrealistic for my taste. It was roughly the same plot as H. Beam Piper's Lord Kalvan of Otherwhen (guy with knowledge of history of firearms and warfare dumped into medieval, pre-firearm culture). Piper did a better job. Maybe future books in series will be more engaging. I'll take a look.

Since the publication of this story there have been many other similar concepts that provided richer plotlines. This is a good story on the surface, but suffers from leaving a lot on the table. With a simple 50% more pages developing details further, it would have been an epic. Now it's just a nice novella

Story and character development is great. Keith has an excellent voice and excellent narration. Looking for more with Keith.

I read this is high school. It is still a good book with wonderful naration.

Still just as good as ever

Where does Janissaries rank among all the audiobooks you’ve listened to so far?

The story is a bit dated but still holds up well, good strong characters in a good story line are hard to beat

What other book might you compare Janissaries to and why?

This book makes you think, is it possible? could this have happened?