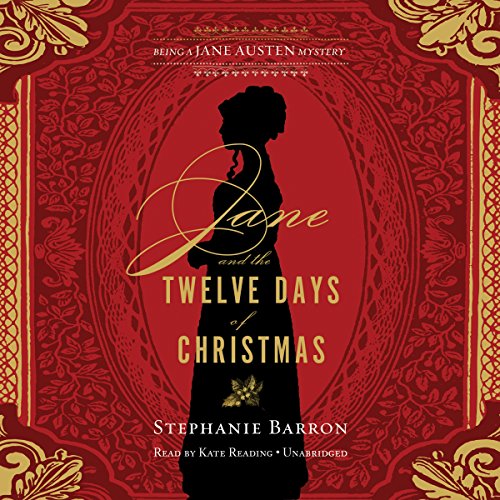 Christmas Eve, 1814. Jane Austen has been invited to spend the holiday with family and friends at the Vyne, the gorgeous ancestral home of the wealthy and politically prominent Chute family. As the year fades and friends begin to gather beneath the mistletoe for the twelve days of Christmas festivities, Jane and her circle are in a celebratory mood: Mansfield Parkis selling nicely; Napoleon has been banished to Elba; British forces have seized Washington, DC; and on Christmas Eve, John Quincy Adams signs the Treaty of Ghent, which will end a war nobody in England really wanted.

Jane, however, discovers holiday cheer is fleeting. One of the Yuletide gathering dies in a tragic accident whose circumstances Jane immediately views with suspicion. If the accident was in fact murder, the killer is one of Jane's fellow snowbound guests. With clues scattered amid cleverly crafted charades, dark secrets coming to light during parlor games, and old friendships returning to haunt the Christmas parties, whom can Jane trust to help her discover the truth and stop the killer from striking again?

Jane Austen and the 12 days of Christmas

I have read numerous Jane Austen genre books and although some have come close to her style, none have been this accurate. Stephanie Barron has done a fantastic and admirable job with this Jane Austen Mystery Series in both historic authenticity and integrity to the original Jane Austen herself. This is an entertaining book that is reminiscent of the novels of the main character with a grand mystery to solve for further enjoyment..

This was my first Stephanie Barron book and now I must read or hear all the rest!!!!!

If you love Jane Austin's classics you'll enjoy this book. Ms. Barron captured the feel of her writing style and tried to give a peek into her life and thought process, albeit fictional.

My favorite of the series!

This is my favorite of the series! I particularly love all the doll costumes she makes for her neice and Twelve Days of Christmas traditions.

While starting slowly the characters are strong, memorable and plot consistently interesting. It maintains its Austin flavor throughout.

Really enjoyed listening to this murder mystery... I like that fact that it’s written in Austen’s style... the story was a bit slow I feel but I guess that was the whole point

Loved a lot about this book!

I love mysteries with history, clothes, food descriptions, no gore, and beautiful language. This has it all. However, I completely understand why it’s gotten mixed reviews. It’s as though someone went through and randomly separated sentences and added adjectives to the nouns. The flow gets jolts of these awkward interruptions. There are occasional oddities such as “very ancient.” I hate to be critical in any way, because I could never write something like this. It’s well thought out, detailed, and beautiful, but it needs a gentle editor who gets the writer and can clear up the cumbersome sentence bumps in the sections between the dialogue. I’ve tried hard, because I love the detail, and it makes me sad to not finish, because it’s got the potential to lead its category.

I picked this book simply because it was Christmas week and I wanted a Christmas story. It wasn't the most compelling period mystery that I've ever read but it was enjoyable.

Too many historical details that add nothing to the plot or characters -- and that is nothing like Jane Austen's style. The narrator had the same inflection on every sentence. In a short story it wouldn't have been so noticeable, but to listen the same pattern repeat itself for hours got a little tedious. This is my first book by this author, and like several other reviewers I picked this up as a seasonal listen while doing Christmas chores. Will not be purchasing more of her work.

Murder mystery in the style of Agatha Christie. An excellent cast of varied characters spending Christmas together at a house party. The occasional, factual historical notes added interest to the story. I’m not a fan of fan-fiction which borrows characters from Austen’s books and imagines what would happen if..... This book is not in that vein. The characters are mostly actual people who were part of Jane Austen’s life, lending an authentic feel to the story. Kate Reading is a favorite narrator for me.