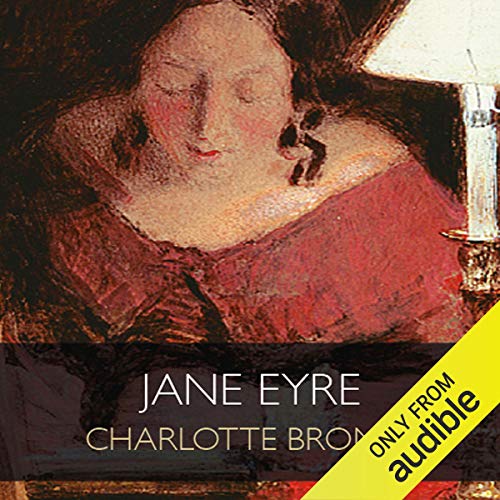 The work tells the story of Jane's early life, her experience at Lowood School and as a governess. Her refusal to accept Rochester's love on any but her own strictly moral terms is a passionate cry for independence.
©2006 BBC Audiobooks (P)2014 Audible, Inc.

Charlotte Bronte’s Jane Eyre, narrated by the incomparable Juliet Stevenson. Sigh. This is classical romance at its best.

Some who read rather than listen may find parts slow, unrealistic and liberally laced with purple prose. But not so listening to Stevenson. Her voice envelopes the high morality of Victorian England, the expressions of love, sacrifice, pain, confusion, desperation – and transports these into the realm of prose-music. Her voice caresses the words. She transforms the coincidences and high drama to the level of probability. She gentles the listener into suspending belief and luxuriating in the outpouring of human emotions, the urgency of secret love and devotion, the unquestioning correctness of sacrifice, the terror of the insane.

Romantics will be enthralled by the barriers to the consummation of love, the very least being the class system and Victorian self restraint.

Stevenson's narration is better than good. This is great classic, read superbly.

Jane Eyre is, of course, a fabulous book. But when narrated by Juliet Stevenson, it is brought to life in the most satisfying way. I have loved listening to this book and getting to know the characters (again) through Ms. Stevenson's lively narration.

Perfect in Every Way

I am an AudioBook Narrator and so judge these things perhaps too harshly. But this performance by Juliet Stevenson is absolute perfection. The headphones never left my ears for days.
I cannot recommend this too highly.

How a Classic should Sound

Jane Eyre and Juliet Stevenson. Sheer Heaven. It always surprises me how long Jane Eyre can be, but this edition makes you understand why good old Jane has appealed to so many for so long. Once again, the narrator makes the difference, and I just can't recommend Juliet Stevenson enough! Long may she read!

Juliet Stevenson is my favourite narrator, period. She understands the characters, and plays them amazingly. Some of the books I choose to listen is because of her narration, and not the book itself (although it obviously plays a role in the matter).

Glad I Finally Read This Classic

I was thoroughly charmed by this book. It is written in a totally different style than what one would expect of a 21st century book, but putting myself in an early 19th century frame, I was able to enjoy this book. I loved the flow of the prose, the use of currently little-used words, the elegance of the whole thing. I can't believe I have lived this long without even knowing the story line of Jane Eyre. I was enthralled with it on many levels. I was pleasantly surprised by the high quality of the writing, creativity and the obvious intelligence of the author. I will be thinking about this story for a long time to come. I think everyone should read it sooner or later. Jane is a great role model for not just young girls, but for everyone who is trying to be a better human being. I hope that is all of us.

The narrator, Juliet Stevenson, was excellent. My one complaint is that she is very soft spoken and could be a little hard to hear.

Jane Eyre is, for me, the greatest of all classic British literature. It is a remarkable gift to have such a magnificent novel read by such capable readers. While Juliet Stevenson does an excellent job, I find the older (and less expensive) version read by Lucy Scott to be as exceptional as the book itself. Stevenson has bit deeper a British accent, while Scott maintains a greater clarity of speech while creating an authentic English tone.

Fantastic! Stevenson was superb in her narration! Definite recommendation for those who love the classic art.

I was captivated with Charlotte Brontë's heroine from the moment we were introduced to her. Jane is an independents spirit, a smart girl with a strong sense of morals who has met with more than her fair share of bad luck, and it's impossible not to feel intense sympathy for her cause. She is both naive and infinitely wise beyond her years, and while the young woman is very much bound by the conventions of her time, the fact that she must follow her heart at every turn pushes her to act in surprising ways and make choices that seem unbearably difficult, which of course makes for great storytelling. Brontës vivid descriptions of the surroundings help us place the action in time and place, but also serve to give us much information about the character's inner workings. I was delighted to discover upon this second reading, that I had forgotten all of the second half of the story, in which Jane's quest for belonging and family rang all too true.

Listening to the excellent actress Juliet Stevenson narrate this story with her trademark rich, smooth voice, truly made this excellent story all the more pleasant to rediscover.

A Classic brought to life by excellent narration

Its a fantastic story. Its well paced and with good detail without being flowery and Jane herself is likeable and not overtly emotional as many heroines of her era were. I remember reading this book for school and having to analyse it line by line which does nothing to endear the classics to students, but now listening to it as an adult, and having it so beautifully narrated was such joy. I found myself driving around the block snd walking for an extra half hour just to listen to it more.

A wonderful rendition of a classic

Juliet Stevenson brought Jane Eyre newly alive for me. Her Jane is perhaps more fiery than those I've seen on TV, or how I read her; Mr Rochester more vulnerable; St. John somehow more unlikeable, despite his holy and noble fervour. The characters were voiced distinctly and consistently, and the somewhat (infectiously) florid and convoluted language of the author was rendered comprehensible and easy to listen to.

Listening rather than reading also means that different parts of the story have prominence - rather than being swept away on the sheer romance of the tale, I found myself repulsed by some of the attitudes of the time, most especially how patronising Jane is regarding the achievement of her low-born schoolgirls at Moorcroft, and how often she uses 'docile' to denote approval of another female, especially considering her own intractable nature. She is rather a snob, considering her own humble beginnings.

I loved Jane Eyre, and love it still. This will be a firm favourite on my app, and will be replayed many, many times.

A book I've always wanted to read but never had the time. This audiobook is extraordinary. Bronte was an amazing writer. I'm so pleased I finally had a chance to listen to this.

An excellent recording / rendition of a classic book. Very accessible, easy to listen to.

A beautiful reading by Juliet Stevenson

Ms Stevenson's knowledge of and passion for this book really come through. A stunning reading.

What a terrific performance by Juliet Stevenson! To begin with she has a lovely voice but, beyond that, her ability to lift the text from the page and bring it wholly to life is incomparable. 'Jane Eyre' is a book which I have loved since childhood and have read and seen as a film or a play many times so I am a critical listener - but Juliet's performance is truly superb, with every character distinctly drawn, the mood(s) thoroughly realised and the narrative paced with real skill.
Thoroughly recommended!

Juliet Stevenson's narration is perfect. This has been a favourite story of mine for over thirty years; I have re-read it several times. I am sure I will now listen to it again and again. A wonderful story beautifully read.

A wonderful story. I could listen to it again and again. Beautifully narrated by Juliet Stevenson. Just loved it.

loved it, I would highly recommend it. Narrator was fantastic and kept you enthralled through every chapter.

I have loved this book since i read it at school. This rendering achieves the goal. Quiet, strong and expressive.

A favourite book I have read often. Juliet Stephenson 's reading brings out its strengths and depths. A real treat.