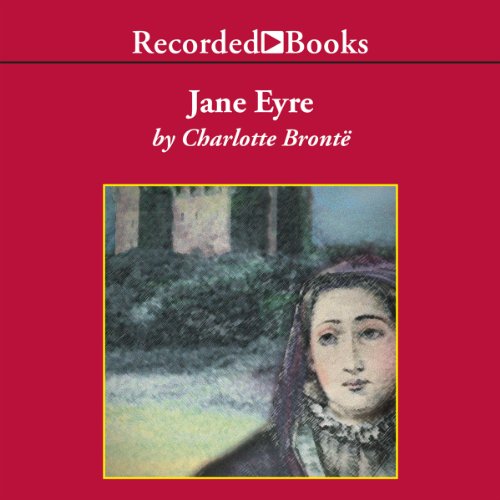 Jane Eyre, a young orphan, leads a lonely life at a boarding school until she's old enough to take a job as a governess for the wealthy and mysterious Mr. Rochester. Over time, she falls in love with her stern employer, but happiness still eludes her - even on her wedding day. What is the mad secret Rochester is hiding?

The title character is an orphan raised by her cruel aunt. After a trying experience at boarding school, she falls in love with Rochester only to have their potential marriage thwarted by a dangerous secret that leads to her temporary downfall. Critics have since cited a modern sensibility in Brontë’s exploration of female identity and class relations.

With her confiding, raspy voice, Gibson draws listeners toward her in her portrayal as the title character in this classic.

The narrator didn't suite me so well

I really love the book Jane Eyre and I do think that Flo Gibson (the narrator) does a good job with it. She's good at capturing each character, the mood, etc. However, I personally did not enjoy her voice so well. She has a really low, deep voice and she sounds very bitter while reading this book. Perhaps it's because the character Jane in the book is supposed to be a bitter character and she is telling the story in first person. But I still didn't like Flo Gibson's voice. I like listening to pretty, melodic voices. That's just my personal preference. But since, as of now, this is the only unabridged reading of Jane Eyre on audible.com right now, I still highly recommend it. If the narrator's voice doesn't bother you, I think you would give it 5 stars.

I enjoyed this book- it is a great escape!
My memories of reading it as a girl were re-lived.
The sound quality was not good though, and in future I will only get books that are in the highest sound quality-,

This book is a genuine 19th century masterpiece. Charlotte Bronte's tale of this young woman's life journey reached out to me across the centuries and touched me deeply. Flo Gibson is a talented narrator with perfect annunciation. However, she reads at a very fast clip, so I often found it challenging to keep pace with her. The quality of the recording seemed a bit grainy, too; I found it helpful to check out the book from the local library and follow along in print to gain full comprehension of the text.

Five stars and more! Would that all the great classics were available unabridged and so well read.

The story of Jane Eyre is one of the greatest works of British literature. It's fun, intense, strange and gothic. Even my young children loved it.The joy of this version, though is Flo Gibson's performance. Just listen to the sample, and you can immediately tell that you are listening to something special. She nails all the characters and narration, of course, but she manages to go well beyond that.I've listened to this version twice on CD, and just purchased it to be able to hear it again.

Fantastic, recording is true to the book and lovely to listen to

I've been with Audible for almost a year now and absolutely love the service. However, this audiobook really disappointed me. To start with, the recording is very poor and sounds as though your listening to an old gramaphone. Further to this, the narrator attempts 'mockney' accents that would put Dick Van Dyke or Audrey Hepburn to shame! All in all the story is great but a combination of a poor performance and inaudible recodings make this a headache of an audiobook. Purchase a different version of Jane Eyre!

Flo's reading of Jane's dialogues/altercations with Mr Rochester and St John lead towards a 5 star rating. But unfortunately the experience is let down by the low formats of the downloads available. The Format 2 download lacks clarity making it a little difficult to listen to, and does not do justice to the reading.

A beautiful story, which is well voiced

I found the voice of the narrator a little difficult to understand at first, but I soon got used to it, she speaks the French phrases beautifully! I have not read this novel since I was a teenager, but I really enjoyed the revisiting of it, since I can now relate to the story in a different way, and found it deeply moving.