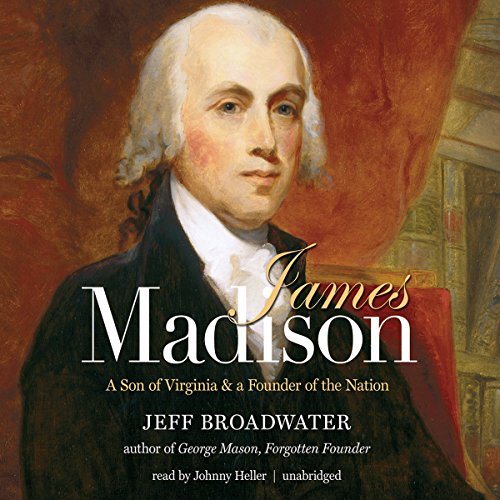 James Madison is remembered primarily as a systematic political theorist, but this bookish and unassuming man was also a practical politician who strove for balance in an age of revolution. In this biography, Jeff Broadwater focuses on Madison’s role in the battle for religious freedom in Virginia, his contributions to the adoption of the Constitution and the Bill of Rights, his place in the evolution of the party system, his relationship with Dolley Madison, his performance as a wartime commander-in-chief, and his views on slavery. From Broadwater’s perspective, no single figure can tell us more about the origins of the American republic than our fourth president.

In these pages, Madison emerges as a remarkably resilient politician and an unlikely wartime leader who survived repeated setbacks in the War of 1812 with his popularity intact. Yet Broadwater shows that, despite his keen intelligence, the more Madison thought about one issue - race - the more muddled his thinking became, and his conviction that white prejudices were intractable prevented him from fully grappling with the dilemma of American slavery.

Jeff Broadwater is professor of history at Barton College and author of George Mason, Forgotten Founder.

Not one of my favorites.

Madison is, at one point in the book, described as having no personality; that is how I feel this book comes across, very generic. I have listened to books about other presidents and felt I came to know the presidents politically and personally, as well as his friends and family. Madison's personality is described here but the description seems one-dimensional.

Perhaps this book is better read instead of listened to. I don't know if it was the writing or the narrator or my limited background knowledge of history (it was hard to keep up with the dates and order of events) but I was just happy to be done with it. I thought the reader read quite fast and sometimes in a monotone; I. therefore, found myself frequently tuning out and having to re-listen to sections. Unlike many other audiobooks, I won't be re-listening to this one.

Not crazy about the reader Mr. Heller, but he was certainly acceptable, and the book itself was very good.

Yes. It gave a good history of Madison and his peers. It would be helpful to someone studying Madison. For casual reading it was a little dry.

What aspect of Johnny Heller’s performance would you have changed?

His reading was in a monotone.