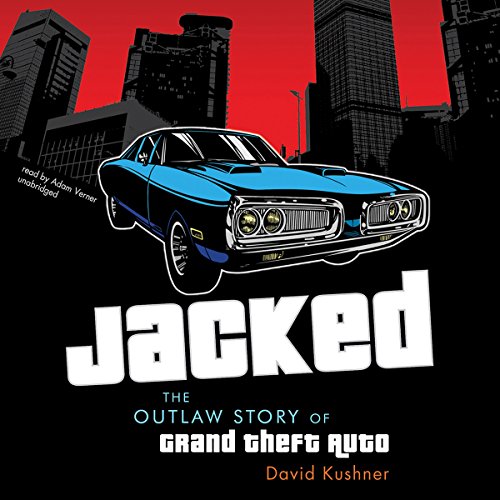 Inside the making of the multibillion-dollar Grand Theft Auto videogame empire....

Grand Theft Auto is one of the biggest and most controversial videogame franchises of all time. Since its first release in 1997, GTA has pioneered the use of everything from 3D graphics to the voices of top Hollywood actors and repeatedly transformed the world of gaming. Despite its incredible innovations in the $75 billion game industry, it has also been a lightning rod of debate, spawning accusations of ethnic and sexual discrimination, glamorizing violence, and inciting real-life crimes.

Jacked tells the turbulent and mostly unknown story of GTA’s wildly ambitious creators, Rockstar Games; the invention and evolution of the franchise; and the cultural and political backlash it has provoked.

Written by David Kushner, author of Masters of Doom and a top journalist on gaming, this book is drawn from over 10 years of interviews and research, including first-hand knowledge of Grand Theft Auto’s creators and detractors. It explains how British prep-school brothers Sam and Dan Houser took their dream of fame, fortune, and the glamor of American pop culture and transformed it into a worldwide videogame blockbuster. It also offers inside details on key episodes in the development of the series, including the financial turmoil of Rockstar games, the infamous "Hot Coffee" sex minigame incident, and more.

Whether you love Grand Theft Auto or hate it - or just want to understand the defining entertainment product of a generation - you’ll want to hear Jacked and get the real story behind this boundary-pushing game.

David Kushner is an award-winning journalist and author. A contributing editor of Rolling Stone, he has also written for Wired, The New York Times Magazine, New York, and GQ. He served as the digital-culture commentator for National Public Radio and is an adjunct professor of journalism at New York University.

What did you love best about Jacked?

Jacked has a great story about one of the most controversial video games of our time. Learning the recent history of the GTA series from an insider perspective was fascinating.

While I wouldn't call Jack Thompson a favorite character, his struggle was fascinating.

Would you be willing to try another one of Adam Verner’s performances?

I did not care for Verner's performance. He sounded tired, and the emotional gravity he put in to the read did not match the character of the text. All around, I found his narration to be disappointing.

No; it was easy to grow bored with the narration.

Kushner tried to duplicate the earlier success of his masterpiece Masters of Doom. The problem is that he didn't have the same access. However, the writing is still at his high standards. The problem is Verner; you'd probably be better off just reading the book.

Could Have Been Better...

I finished this story all the way through as I really wanted to have a good grasp on RockStar games and the GTA series. However, while the book provided some good history and insight, it always felt like it fell a bit short throughout the listen. The stories seemed more second hand and felt like key and interesting details were missing.

I LOVED this book.

If you are a gamer this is a really cool look into one of the biggest game company in the industry. It is a great inside the company through its birth up to today. It is well paced and Adam Verner does a great job narrating it. If your not a gamer it is still a good listen into a company going from a couple of guys into a multi-million dollar company. The story of how money and fame can take its toll and change people.

The same author wrote Master's of Doom. If you loved one you'll love the other. Highly recommend both.

A letdown. At least I got it for free.

If you want to know nothing but some GTA facts and chapters dedicated to JT. This is the book for you. If you want any sort of comprehensive book about Rockstar and their games, well you won’t find that here.

A letdown compared to Masters of Doom.

Definitely an easy listen and explains so much that I never knew. From the birth of the game to the massive steam roller it became at it's prime.

the voice actor is not the best, granted, but he is not as bad as some reviews claim.
it definitely helps to speed up to 1.25 or 1.5x

Being a grand theft auto fan myself this is a great and interesting read. I have always wanted to know about the energy the game devs had when making games like GTA and both red dead games. And you can’t forget about manhunt

the books treata you as you are supposed to know the main character before you see them. also could have done more about the game and company it self

Easy listen. Not super exciting though.

As far as game books go, this is no “Masters of Doom,” but not all books can be, and that’s ok. I felt that this book was quite cursory in its treatment of everything, never really exploring anything in depth. No feeling of high stakes, no gripping personal stories. Mostly just a summary of the media brouhaha surrounding the GTA games, including the game studio’s own version of the various events that transpired. Still, The book did manage to teach me a handful of interesting tidbits I didn’t know about the history of some of my favorite games ever. The book kept me sufficiently entertained while I was doing menial household chores. Definitely worth the price considering it was free. Worth a credit though? Probably not unless you are already a big fan of GTA, or really interested in the history of violent video games and its impact on society.

So much I didn’t know

A rich story about Rockstar. Makes me love the games even more. Must listen for anyone who enjoys GTA.