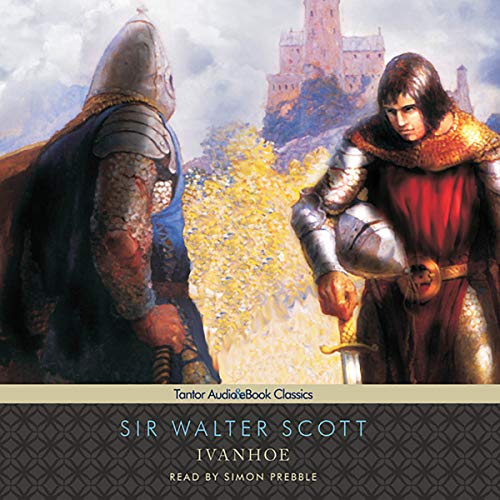 The epitome of the chivalric novel, Ivanhoe sweeps listeners into Medieval England and the lives of a memorable cast of characters. Ivanhoe, a trusted ally of Richard the Lion Hearted, returns from the Crusades to reclaim the inheritance his father denied him. Rebecca, a vibrant, beautiful Jewish woman, is defended by Ivanhoe against a charge of witchcraft - but it is Lady Rowena who is Ivanhoe's true love.

The wicked Prince John plots to usurp England's throne, but two of the most popular heroes in all of English literature - Richard the Lion Hearted and the well-loved, famous outlaw Robin Hood - team up to defeat the Normans and regain the castle. The success of this novel lies with Sir Walter Scott's skillful blend of historic reality, chivalric romance, and high adventure.

Ivanhoe is really one of the best listens on Audible. Scott's wit, story-telling, and personal narration are perfect. Prebble's narration is at its best. This work is so obviously an influence on many of my favorite authors. Interestingly enough, one author that most resembles Scott (purposefully) in style, Susanna Clarke, also has Simon Prebble read her books: Jonathan Strange and Mr. Norrel; and parts of her Ladies of Grace Adieu (I recommend both). Prebble is spot-on, and Scot is very enjoyable to read. Ivanhoe is most highly recommended.

Ivanhoe has all the elements for an entertaining and exciting story. I love it as a companion story to middle school world history. The students learn about society's rules during the Crusades and Age of Chivalry and see the problems of hypocrisy and political intrigue alongside family squabbles and stubborn pride. Scott also demonstrates how the mindset of differing religions and nationalities can work together with a little courtesy and valuation of human life. As in the 21st century, schemes cannot function without a financier. The relationship between the borrower and lender can be interesting, as well as troublesome. Robin Hood and Richard, the Lion-hearted are two supporting characters to the Knight Templar, Cedric of Saxon, Rowena, Wilfred of Ivanhoe and Rebekah, the Jewess. This may be Sir Walter Scott's most entertaining work in his creation of the novel genre.

It's a classic, of course

Anyone who has not read this should get around to it. I read it when I was 10 years old. Nearly 50 years later it is well worth re-reading.I had forgotten how many of the movies about Robin Hood had their basis in this story.

I couldn't pick a favorite character no matter how I tried. Each seemed very alive to me.

Which character – as performed by Simon Prebble – was your favorite?

Simon Prebble was good at making the villains of the piece come alive. He has the voice for menace, I think.

Rather corny but enjoyable nevertheless.

This was my first Sir Walter Scott and while I enjoyed it, it was to modern ears a bit corny. What did make it interesting was listening to an historical novel set in the middle ages written in English not too different to that written by Jane Austen. It gave the whole novel an authenticity as the descriptive passages were not written as they would be today.

Overall I enjoyed it and will listen to more Scott. Simon Prebble did a great job narrating as he always does.

Story so good you hate to put it down. Reader makes you feel like your watching a movie. I have read the book 4 times each time I enjoy it like its new.

If you could sum up Ivanhoe in three words, what would they be?

Still reading and think it might be ages before I get though it all so reviewed now on what I heard so far.

He makes it easier to listen to than to read.

I know it is a classic, but oh my gosh. I need my cliff notes!

A fine and thrilling tale told with extremely good voice. Everyone should read this tale and learn virtue from it. It hurts to hear the prejudice but the dignity shines brightly of all the innocent in this story.

A book no-one knows, that everybody should read

The book is amazing! The end well leave your heart aching for more. READ IT!!!

An excellent story with fascinating historical interest. I would highly recommend listening to this book.

I enjoy the writing style of the late 18th and 19th century. Still, I was expecting Scott to be a little turgid, and I was pleasantly surprised. He has a marvelous vocabulary. The plot is a little corny; the characters are not especially complex, and highly idealized. But it's an enjoyable book, expertly narrated. The Saxon v Normal antagonisms, and the persecution of Jews are historically interesting; but I don't believe this book is a very reliable source of historical information or insights.

The story is amazing, chivalry religion and romance, All aided by a great performance by the reader