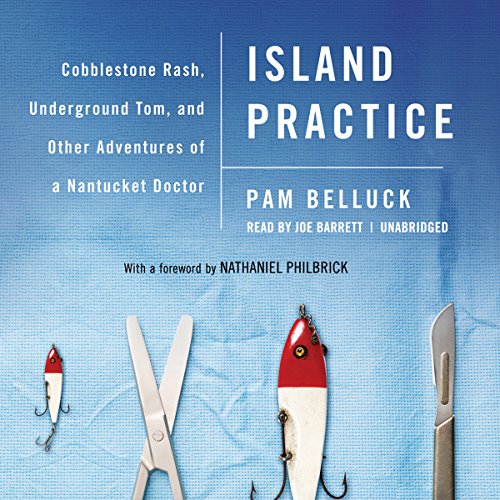 If you need an appendectomy, he can do it with a stone scalpel he fashioned himself. If you have a condition nobody can diagnose - "creeping eruption" perhaps - he can identify what it is and treat it. A baby with hair tourniquet syndrome, a human leg that's washed ashore, a horse with Lyme disease, a narcoleptic falling face-first in the street, a hermit living underground - hardly anything is off-limits for Dr. Timothy J. Lepore.

This is the spirited, true story of a colorful, contrarian doctor on the world-famous island of Nantucket. Thirty miles out to sea, in a strikingly offbeat place known for wealthy summer people but also home to independent-minded, idiosyncratic year-rounders, Lepore holds the life of the island, often quite literally, in his hands. He's surgeon, medical examiner, football team doctor, tick expert, unofficial psychologist, accidental homicide detective, and occasional veterinarian. When crisis strikes, he's deeply involved.

Lepore has treated Jimmy Buffett, Chris Matthews, and various Kennedys, but he makes house calls for anyone and lets people pay him nothing - or anything: oatmeal-raisin cookies, a weather-beaten .44 Magnum, a picture of a Nepalese shaman.

Lepore can be controversial and contradictory, espousing conservative views while performing abortions and giving patients marijuana cookies. He has unusual hobbies: he's a gun fanatic, roadkill collector, and concocter of pastimes like knitting dog-hair sweaters.

Ultimately, Island Practice is about a doctor utterly essential to a community at a time when medicine is increasingly money driven and impersonal. Can he remain a maverick even as a health-care chain subsumes his hospital? Every community has - or, some would say, needs - a Doctor Lepore, and his island's drive to retain individuality in a cookie-cutter world is echoed across the country.

Pam Belluck, a health and medical writer, has been a staff writer and national bureau chief for the New York Times. She has won several awards, a Knight Fellowship, and a Fulbright Scholarship.

©2012 Pam Belluck (P)2012 Blackstone Audio, Inc
Costumi e tradizioni Medico Stati Uniti Stato e locale
Mostra di più Mostra meno
"If you want to understand the 'real' Nantucket, you must read Island Practice. Dr. Tim Lepore personifies the island's fierce, quirky, and independent spirit. This is a book about an extraordinary man - a doctor, yes, but also a community hero. His story is as engrossing as the best fiction...but it's all true." (Elin Hilderbrand, New York Times bestselling author of The Island)
"Pam Belluck has dissected the antics and heroism of a Nantucket doctor who doubles as the resident wizard. This physician not only makes house calls (even to tree houses) but also invites patients to drop in at his house for treatment. If you suffer from Nantucket Fever - or any other ill while on that island - Dr. Tim Lepore is your man." (Dava Sobel, New York Times bestselling author)
"Outstanding imagery and character description. Readable, interesting, and almost cautionary in its description of what we have lost in today's world of medicine.... Thank goodness for writers like Pam Belluck who, in Island Practice, presents Dr. Tim Lepore, a cross between Marcus Welby and Hawkeye Pierce of M*A*S*H fame." ( New York Journal of Books)

I am a former (and perhaps future) patient of the doctor in this book, Tim Lepore, and the stories spun here are all true and very entertaining. I found myself laughing out loud at parts. Tim is a larger-than-life figure on the island. Eccentric. Brilliant. Hard working. A vital part of the community. I found the book to be a little scattered and would have appreciated a slightly more linear approach to telling Tim's story, but overall, it was quite enjoyable. The only downside of this experience was the narrator, who did his best to make everyone who lives on Nantucket sound like a back-water r-smearing hick. Not everyone here speaks with a folks fishing-village New England accent. (Although, admittedly, some do.)

I would not recommend this book, firstly it is very long seemingly covering every action the doctor took from his parents meeting to age 67. Although the doctor dose seem like an amazing person with lots of good story's, the style makes it hard to tolerate. Written as an series of quotes, with little connection this book lacks the progression, plot, and organization that tie together James Herriot stories. The author seems more interested in writing an tribute then writing an novel.
This book could have been good if tackled by an author capable of crafting coherent stories. Unfortangly Island Practice is less "the naked lady who stood on her head" or "all things bright and beautiful" and more an ten hour long obituary.