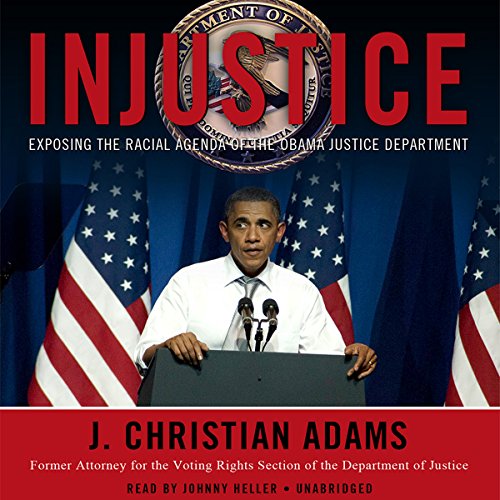 Justice is supposed to be blind, especially to race and politics. Yet as Department of Justice (DOJ) whistleblower J. Christian Adams divulges in his shocking exposé, Injustice, justice under the Obama administration is anything but blind. Here, Adams reveals the never-before-published truth about the corrupt, racist, and politicized inner workings of the Obama Justice Department, as well as the untold story of the DOJ’s corrupt handling of the New Black Panther voter intimidation case.

As a former Department of Justice attorney in the civil rights division, Adams has witnessed firsthand how the DOJ is aggressively executing a racist and radical left-wing agenda through its policies and employees. After watching the DOJ continually turn a blind eye to voter fraud, blatant racism, and voter rights abuses, Adams finally blew the whistle during the New Black Panther case—a case that Adams brought to the DOJ’s attention and ultimately resigned over because of the corruption and perjury he witnessed leading up to and following the case’s orchestrated dismissal.

Revealing unknown and startling examples of racism and corruption at the local, state, and federal level, Injustice exposes a Justice Department that is anything but just.

©2011 J. Christian Adams (P)2011 Blackstone Audio, Inc.
“Christian Adams is a truthteller, whistleblower, and American patriot…. If you care about justice for all,  Injustice is hands down the most important book you’ll read this year.” (Michelle Malkin)

Eric Holder and the Justice Deparment -- and by extension the whole Obama administration -- have a stealth agenda, and racial grievance is at the heart of it. It has to be stealthy because the American public would not stand for it if they knew.

J. Christian Adams has the goods on Holder and Co. and he lays out his case in a convincing fashion. As galling at as it is to say it, it all comes down to skin color. (Four more years of this and we could be headed for our own verson of Zimbabwe.)

If you have any interest in the topic -- and you should -- Injustice is a gripping listen. Highly recommended.

A good reminder of why we shouldn't place so much trust in government to do the right thing. This book serves as an illustration that those that claim to represent minorities and equality often overlook a simple principle of using the rule of law evenly, regardless of race creed or color. The bias and ideological stench that's coming out of the DOJ is a sad insight to what we've come to today.

A very enlightening book written by a recent insider in the Dept of Justice. Every voter should read this book and demand a fair vote count from all officials. INJUSTICE clearly points out the corruption in the DOJ and how they will do (or allow) almost anything, legal or illegal to win election for their side. Shouldn't they be party-neutral and race-neutral?
As a citizen, our right to vote and have every vote count is a desire that should, and probably does, cross party lines. To have people cheat, lie and otherwise manipulate our vote should enrage every American. This book will open your eyes to the prejudice, lying and underhanded tactics happening up to an including the very highest levels of our government.
The most frustrating thing is that nearly everything brought to light by this book is still going on and will certainly affect our next election cycle.
I learned from this book that if you play by the rules, expect common sense and fairness........you lose.

What disappointed you about Injustice?

One can hardly trust the authenticity of a book that use epithepts like "left wing", "radical", etc. in practically every sentence as proof of wrong doing.

What could J. Christian Adams have done to make this a more enjoyable book for you?

What aspect of Johnny Heller’s performance would you have changed?

He could be a little more animated.

If only Americans would start listening to whats in these books, we might not be in such a disgusting mess in this country. Shame on all of you American for not taking action. I say this not because of this book but for the state the best country in the world is now in.

Adams opens our eyes with a scathing report on how our nation's "free elections", aren't. "Civil Rights" is clearly an oxymoron.
I was shocked to learn how often and how easy it has been for elections to be slanted or outright stolen, right in front of us. The primary right and responsibility of all Americans has been corrupted by a liberal, race-prejudiced administration, and the DOJ has made us powerless to stop it.
Adams should be rewarded the Nobel for bravely bringing this information to our attention. At the least, he would be deserving of it.