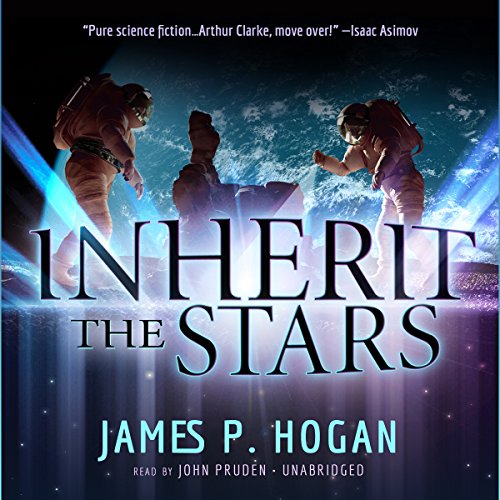 The man on the moon was dead. They called him Charlie. He had big eyes, abundant body hair, and fairly long nostrils. His skeletal body was found clad in a bright red spacesuit, hidden in a rocky grave. They didn’t know who he was, how he got there, or what had killed him. All they knew was that his corpse was 50 thousand years old - and that meant this man had somehow lived long before he ever could have existed.

©1977 James Patrick Hogan (P)2013 Blackstone Audio, Inc.
“Pure science fiction…Arthur Clarke, move over!” (Isaac Asimov)
“Hard science fiction with a lovely vengeance but done so well that almost no scientific background is needed to understand and enjoy it…Highly recommended.” ( Analog)
“Intellectual action portrayed as excitingly as any space war - a truly absorbing read and a reminder that learning is one of the greatest human adventures.” ( Publishers Weekly)

The author represents what is best about science fiction. I've let the world pass me by and I really don't seem to care. Hogan knows how to write science fiction the way it was meant to be and which no longer seems to be.

There's very little character development as such but there are characters and their thoughts about the world are what matters most of all. One of the values of science (and even a value we all have within us) are that the facts we have about the world within a domain of interest of a problem needs a best explanation in order to explain them, and often, there can be more than one explanation that can be equally understood. As for this story there are anomalous facts about 'alien' life forms on the moon which start to challenge our understanding of us as human beings. What could be more intriguing?

My wife and I listened to this one together and I'm glad. Books like these not only offer entertainment with a somewhat exciting story but at the same time load the listener up with the proper way to understand science in general and evolution in particular.

I just really like James P Hogan and this period of scifi writing which ends up being better than 90% of the junk that is published today (Sturgeon's Law applied to books in general and scifi in particular). I'm an anachronism and I seem to value the older scifi books more than the stuff I come across today. Don't even get me started on today's movies, but if you want to talk about movies before 1945 than we can have a pleasant multi-day conversation!

Imaginative story. It was obvious that book written many years ago as cigarette smoking was prevalent, no female main characters and outdated slang used. Most of book is a tedious read as details (evidence) is uncovered with little character development or dramatic plot turns. The descriptive language is quite bland. The story’s resolution is worth the effort of reading to completion.

If you could sum up Inherit the Stars in three words, what would they be?

I first read Inherit the Stars 35 years ago... and I can honestly say that it was one of the inspirations that lead me to become a scientist. In a fit of nostalgia, I bought the audio book (along with the two direct sequels to the trilogy). Although the book feels very dated and sexist, it is still an enjoyable story without diverting too much into new age phooey (like the later books in the trilogy... most notably Giant's Star). The narration is passable at best.

Would you listen to another book narrated by John Pruden?

Give it a chance

This series is heavy an science and imagination. It seems loosely based on the annunaki theories. It takes at least a functional foundation in physics and modern mythology to understand and it is admittedly a slow burn but if you are a hard core nerd like me you will enjoy it. Plus... it’s free!

Originally I read this when I was in college, back long ago. You know, before they invented fire. Not a rousing adventure type Sci-Fi story. More the type of book most of the genre was back then. Lots of science. Still, it’s a decent trip down memory lane of how we saw the world was going to be.

This is hard sci-fi and about 90% info dump. The book was published in 1977 and features a very 1970's look at what 2027 might look like. It's interesting to see what predictions he got right, and what he got wrong (lots wrong) flying cars, everyone smokes (even in space), etc.

While the science behind it feels very solid, a few of the mysteries of the universe that he was trying to fill the gaps in for have now been solved and no longer apply.

The worst part was the voice acting that was very dry and bland, so much so that you would have thought that a male Alexa was narrating most of it. Many of the characters talk the same way (not just in voice acting, but in dialog) and have the same mannerisms. The dialog is very repetitive and they seem to revisit the same topics over and over and over...

I figured out the "big mystery" about halfway through the book, and it frustrated me to have to listen to chapter after chapter of them postulating about it when the answer was obvious.

My criticisms are many, but overall, I enjoyed it just enough that I will likely listen to the sequel at some point.

if only a book could have been an idea...

The idea is Amazing, Fabulous.
The story is boring to death.
the story should have been a short story, and than it would have been grate.
but it's not...

You cannot rewrite the history of the history of the solar system and call it science fiction. Do not get if you have any background in science, it’s just terrible. In addition, there are No characters or story development. I’m lucky this was free.

A I Fi Data Forensics - oldschool

Big on ideas. Small on characters. The story is told through an extremely scientific viewpoint. Everything is solved with data, so it’s a little short on action scenes!

Now I know why it was ‘included’ in membership

Hours of tedious pseudo science arguments from future scientists. Not much of a story at all, and no action.

One of my favourite all time novels. Great mystery story that holds together really well.

A classic of its kind

Watch out for the tech that is routine now & was fiction then... Reading not so good but didn't spoil the book for me.

A must read for any sci-fi fan

If you're going to listen to anything sci-gi make it this book. A pure pleasure.

Sorry but I found the dialogue dated, the storyline predictable and the narrative wooden. Not quite as bad as listening to paint dry but I would recommend listening at x1.25 to lessen the boredom.

Thought it was going to be hard going... Kept with it and was enthralled. Will be reading the next in series next.

A very good story from start to end, well read in my opinion. I shall buy more of James Hogans books.