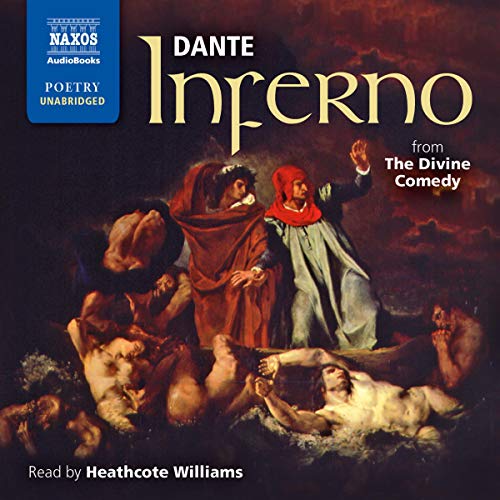 Inferno: From The Divine Comedy

"Abandon all hope you who enter here." ("Lasciate ogne speranza voi ch’intrate.") Dante’s Hell is one of the most remarkable visions in Western literature. An allegory for his and future ages, it is, at the same time, an account of terrifying realism. Passing under a lintel emblazoned with these frightening words, the poet is led down into the depths by Virgil and shown those doomed to suffer eternal torment for vices exhibited and sins committed on earth.

Inferno is the first part of the long journey which continues through redemption to revelation - through Purgatory and Paradise - and, in this translation, prepared especially for the audiobook, his images are as vivid as when the poem was first written in the early years of the 14th century.

"Actor and writer Heathcote Williams gives a masterful performance of Benedict Flynn's blank verse translation. Williams modulates his smooth baritone into different characters, maintaining an even pace through this classic work. The cantos are punctuated by short selections of music ranging from Gregorian chant to Renaissance dance music.... A plaintive horn sounds the beginning of Inferno, the beginning of Dante's journey from The Gloomy Wood to the Circles of Hell. Dante begins alone in a fog of seeking and confusion until he encounters the shade of Virgil. When the poets begin the descent at the beginning of Canto Three, Williams's booming voice is technologically enhanced to create an echo for the famous line, "Abandon all hope, you who enter here." ( AudioFile)

The Best Inferno So Far

Benedict Flynn's translation is crisp and clear, and Heathcote Williams's narration is flawless. I have several other recordings of Dante's Inferno, but this is my favorite.

A classic rendered in an ominous, heavy tone

The author tours the underworld, witnessing all the suffering, in a first-person account. Sometimes the language is a little hard to track as this was written hundreds of years ago and translated, but that kind of adds to the overall effect. The actor does a good job with various character voices -- generally you can distinguish them readily and dialogue does not bog down. His voice is very expressive. Don't listen when you need to be perked up!

What did you love best about Inferno: From The Divine Comedy?

The overall mood was eerie and the dictation was perfect

What does Heathcote Williams bring to the story that you wouldn’t experience if you just read the book?

The classic book was brought to life and the mood by Mr. Williams was spot on.

The Levels of Hell

It's hard to imagine how anyone can rightly understand the canon of Western Literature without reading Dante. Dante's first part of the Divine Comedy is compelling I itself, but it's also important because of its influence on the Western Canon. His imagery is creative and brilliant, even if his references to conte port personages can't be fully appreciated without a commentary. I listened to this translation and read along in another translation (Charles Eliot Norton) because I could not find acceptable matching versions. Excellent reader (Heathcote Williams), and a good translation (Benedict Flynn). I found the differences in translations did not prevent me from following along. While I recommend reading along while listening, I found that practice especially helpful with Dante. To keep perspective, I also found myself referring back to Dante's own analytical table of contents (wherein he summarizes each canto.
Overall, this was a good experience and I recommend it highly. I also look forward to exploring other translations: Dorothy Sayers and John Ciardi.

best version of this book

the narrator is what makes this version a step above the rest. the depth of feeling the narrator brings to this journey is beyond anything else I have found.

I highly appreciate this reading; the small bits of music are fine and the light dramatization doesn’t take away from the literature. I found every consideration put into this truly set the appropriate mood and tone for this work, no injustices done here.

It might have been okay without the HORRIBLE music playing between the cantos, not to mention the volume would be much louder for the music so would blast you with this jarring noise every 5-7 mins.

This is a great audio book. This is, in my opinion, a beautiful translation. The music between cantos really sets the mood for the story to follow. Well performed with great personality.

For some, thia story can seem overly complex at times due to the web of allusions and imagery but I feel that the reader's spot on personalities help aid in the feelings being conveyed. If you listen intently, it can be an absolutely lucid and strangely beautiful story. At the same time, if you know the general plot of the story and listen to this in the background while multitasking, while you may not be able to appreciate the intricacies, the feelings of the journey still show through.

Truly the greatest epic poem of all time, unmatched to this day, I highly recommend to everyone

Good translation well read. This is a fascinating encyclopaedic tour through the 13th century mindset, so keep that in mind. If you're looking for something a bit more fast paced the BBC dramatisation of the abridged whole Divine Comedy (also available on Audible) might be a better place to start.

Dante's Divine Comedy is the keystone of European literature. It was the first important work composed in a modern language, and it is a book that almost every serious writer has read and been influenced by.
If you want to understand poetry, or drama, or novels, or film, or opera - you need to read Dante at some stage (and the younger you first read him, the better).
If all you ever read is till receipts, you can probably get along without him.

What was one of the most memorable moments of Inferno: From The Divine Comedy?

Francesca da Rimini and Ugolino are the two moments everybody remembers. Me too.

There are some very odd translations of The Divine Comedy into English. Dorothy Sayers writes like nobody ever spoke, while Longfellow manages to be as obscure as he is inaccurate.
Flynn has translated Dante into natural idiomatic English, which leaves the poetry to stand naked. Heathcote Williams delivery is nuanced but not lapel-tugging:- a perfect complement to Flynn's understated excellence.

I'm always tickle by how when Vergil arrives at the gate to Purgatory, he wanders off into a private conversation with Cato (ignoring Dante completely for half the canto).
It's always fun when the characters cut free of the book, but this is one of the most amusing examples of that.

A wonderful performance. The translation is accessible and attractive to listen to. It is read at a pace which allows you appreciate the text. The reader is superb! His interpretation of the work is excellent and it is a pleasure to listen to.

Hearhcote Williams reads it beautifully: beautiful voice, excellent pacing, he gives just enough pathos without burdening the listener. I love the translation, without having compared verse by verse with other translation the verses sound beautiful in english and elegantly capture the poetry and the meaning. The production is also excellent, clean sound, spacious, fitting music helps underline transitions in the text. I thoroughly recommend it

Superb narration of this literary masterpiece.

What sets this version apart from all others Is the extraordinary narration by Heathcote Williams. I have to say that it is one of the best I have ever heard. Today I looked for a contact address for him in order to congratulate him but found, to my great sadness, that he has died.

wonderfully read by the actor. the translation is easy to understand and follow. music is traditional and adds to the atmosphere

I was initially concerned that the age of this story would make it hard to understand, but I can honestly say this might be my favourite listen yet. It's so gripping, dark and gruesome, but the language makes it seem artful and song like. The reader also did an amazing job, very convincing and enticing. Couldn't recommend more

Great piece of literature, not so great narrator?

Took me 2 full listen throughs in order to get anything, a rather hard piece of work to comprehend. Even after listening to it twice, it still feels like I haven't gotten much out of it, perhaps that's just me or the first part wasn't meant to be with too much information and once the other 2 parts are read all the loose ends will tie up.

Regarding the person reading this book, the recording was quite bad, you can literally hear him heavily breathe into the mic and so on.

Overall, I would suggest this book because it does make you use your imagination and thoughts a lot.

A very boring tale.
Can’t imagine why anyone would read it other than for the historical context.

What an amazing story. Wish I bought all three instead of the one version edition