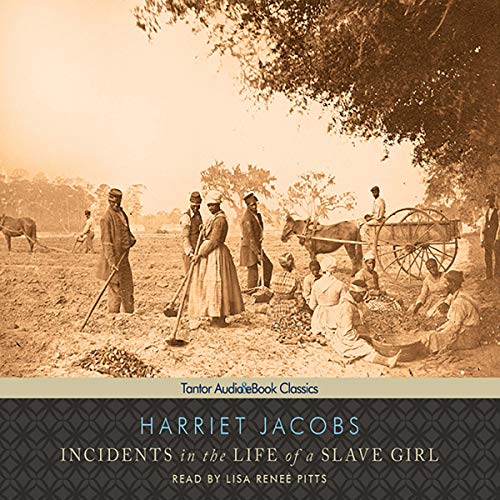 Published in 1861, Harriet Jacobs's Incidents in the Life of a Slave Girl is an autobiographical account of the author's experiences as a slave in 19th-century North Carolina, from her relatively happy childhood to the brutality she experienced as a teenager and young woman to her eventual escape to the North. One of the few slave narratives written by a woman, Jacobs's work deals frankly with the horrors of slavery, shedding light on the abuses female slaves in particular often endured at the hands of their masters. Incidents in the Life of a Slave Girl is a gripping, unflinchingly honest account of slavery, one that stands as an important counterpoint to male slave narratives by such authors as Frederick Douglass.

WELL WORTH YOUR CREDIT!

I enjoyed this book. I learned quite alot of this time that I did not know. Being Canadian, this was not a subject that was ever taught in our schools.( Perhaps that has changed now, I dont know. ) This was a time in history that was more horrific than I even thought. And yet ,throughout this story, there was a constant thread of love and hope. There is quite a lot of focus on the relationship between Harriet and her grandmother. This relationship was simply amazing in it's power and strength. I came away from this book better for having listened to it, on so many levels.
What an amazing woman Harriet was, as was her family. Very highly recommended.

Lisa Reneé Pitts' voice is so sweet, and the writing so lush, this story became what I looked forward to most about getting home! As someone with hardly one cultural tie to speak of with African American history I found this a real education, and as such an impassioned first hand account, made it incredibly relatable. Would absolutely recommend!

this book is narrated so vividly, it places you at a firsthand experience of the trials of Jacobs . I can't wait to start my next slave narrative.

What can say...this was a well written book, I highly enjoyed it from beginning to end!! I loved the main character she was amazing!!

I have been assigned to read this book as a school project in Florida. It was hard to read and visualize the story in it’s writen form, but Audible has let me enjoy this wonderful book to it’s peak. The performance is by far the best part, with the story almost on par with the increasing amazing performance by Lisa Reneé Pitts. Will be listing to this again!

What an amazing story! Well written and hard to read. Such a hard look at history.

Required Reading for all Americans

This book ought to be required reading for all Americans. I am ashamed to only now realize I had never read a firsthand account of slavery by a female slave. The book both reads in such an intimate and humanizing manner as to feel like a diary while also including the writer's imploring words to awaken the sensibilities of northern women. This book is a national treasure.

This is a reviting tale. There were several occasions where I could not stop listening until I found out what was going to happen. I have also been struck how, in several ways, some of Linda’s experiences still remain for African Americans. It has been a humbling realization. I highly recommend this book. Additionally, there are several narrators for this book. I tried several before finding this one by Lisa Renee’ Pitt. One seemed British, another had a sort of melodic way of speaking which made it difficult for me to follow. This narration was absolutely perfect!!!

You are taught about slavery in school and it takes to some hearts more than others. Reading or listening to this book makes you feel ten times more than what you are taught. You can feel all the mental pains and anxiety although we will never feel the physical pain, it hurts nonetheless. It's a must read. The narration is amazing in aiding the feelings. we should be grateful for a woman like this to have written these words.

What a struggle for freedom, but all worth it.

To think about being hidden in a small garret for seven years to avoid a slave owner's wrath and I'll treatment is an atrocity to mankind's history.