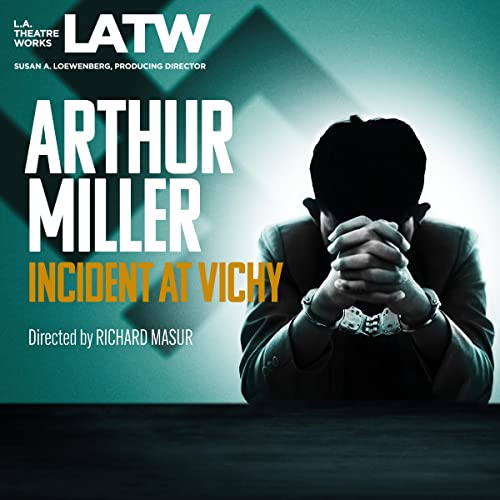 In Vichy, France, in 1942, nine men are detained under a shadowy pretext. As the tension builds, the men are questioned—are they the sort of people whom the new Nazi regime considers "inferior?"

Recorded before a live audience at the Skirball Cultural Center, Los Angeles in February 2002.

Ben Diskin as A Boy

Arye Gross as Bayard, An Electrician

Andrew Hawkes as A Major

Gregory Itzin as Monceau, An Actor

Robert Lesser as Police Guard/Marchand, A Businessman/Ferrand, A Café Proprietor

Jon Matthews as Lebeau, A Painter

Raphael Sbarge as Leduc, A Doctor

Shahar Sorek as A Waiter/Second Detective

In this dark character study, the first sounds the listener hears are faint music, then sirens, then the echoing frightened voices of detainees in a damp Nazi holding cell in Paris, 1942. They're the voices of men in trouble who are wondering how they'll survive and who is to blame. The despairing tones of an electrician (Arye Gross), a painter (Jon Matthews), a doctor (Raphael Sbarge), and six others who are arguing about who deserves to be sent to a concentration camp aren't pretty to hear, but they're mesmerizing. L.A. Theatre Works perfectly captures the black-and-white Cold War ambiance of this 1964 one-act classic.

This book gave me a different perspective on the atrocities carried out by the Nazi's. To find yourself and family in a position like this must have been truly terrifying. I enjoyed this book as much as Arthur Millers other masterpieces, in particular Death of a Salesman. I am now a huge fan of Arthur Millers work.