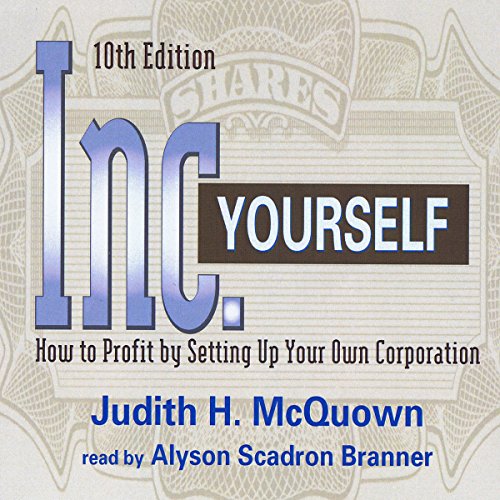 More than two decades ago, when former Wall Street portfolio analyst Judith H. McQuown first sat down to write the inaugural edition of Inc. Yourself, the incorporation of a small company was a fairly simple procedure undertaken by relatively few refugees from the then-burgeioning safe haven of big-time corporate America. But while the appeal and the underlying need for striking out on one's own have increased markedly in the interim, the continual passage of major tax-law changes had ensured that incorporation is no longer such an uncomplicated process. Accordingly, in her best-selling primer, McQuown outlines the core information necessary to turn any enterprise into a separate legal entity replete with all the rights, privileges, and liabilities that such a move entails. But she also updates those suggestions for today's small businesses whenever appropriate, and bolsters them with important details on newly available options for pension plans, organizing the venture, and sheltering its income from taxation.

A former Wall Street analyst and New York City Senior Investment Analyst, Judith McQuown became exasperated by the glass ceiling women faced and formed Judith H. McQuown & Co., Inc. Her business provides writing and editorial services to the financial and publishing industries. She is the author of eight other books and conducts Inc. Yourself seminars nationwide. Alyson Scadron Branner currently hangs her rain boots in Seattle. She is an active voiceover and theatre artist up and down the West Coast, as well as in Toronto.